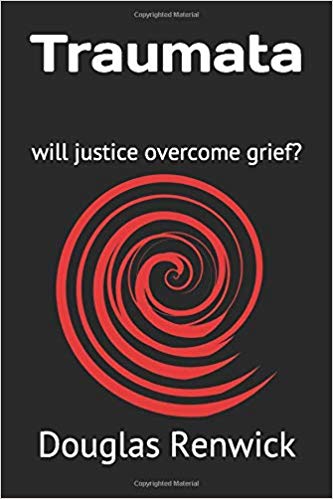 It’s not often that I feature an interview I haven’t personally conducted on Linda’s Book Bag, but I’m breaking my own self-imposed rules today to let the lovely folk at Bookollective interview Douglas Renwick, author of Traumata because I simply couldn’t find time to read Traumata for review or interview Douglas myself but I really like the sound of the book.

Traumata is available for purchase here.

In Khuh Tabar, high up in foothills of the Hindu Kush, a young Englishwoman watches her husband and son murdered. Two years later, she returns to England, still traumatised by the memory. Her grief turns to rage when she finds out the killer walks free. Will she honour the ancient code of the Pashtuns and avenge the deaths, risking a life sentence for murder? Or will she abide by the laws of her homeland and live with her anger for ever?

A Bookollective Interview with Douglas Renwick

First off, who is your perfect reader?

I aim my books at intelligent people who like to expand their knowledge of some of the more controversial issues of our time. A Balance of Evil was about the doctrine of necessity; The Gathering looked at the ethics of organ transplant.

I like to do this in an entertaining way within a feasible plot with a satisfactory ending. My perfect reader is one who guesses the denouement a page or two before it’s revealed. I hope my novels appeal equally to all sexes.

What books are on your bedside table?

Daughter of Time, a novel written by Josephine Tey in 1935 about Richard III which showed he was not the wicked uncle of history books: conspiracy theories and fake news are nothing new.

The Spy and the Traitor, by Ben Macintyre.

When you wrote Traumata, did you have a writing routine?

Not really. I’m an early riser so on most of my mornings when I’m at home I write for a couple of hours. But writing is also about thinking and I do that anywhere at any time. My problem is dragging myself away from my desk and doing other things, like sweeping the leaves off the drive or mowing the lawn.

Where do you write best?

In my study in France. We have a chalet in the mountains and I love being at altitude surrounded by the most beautiful views. In the winter, I write before the ski-lifts open, then do a bit of thinking in the telecabine on the way up.

Where did your inspiration for Traumata come from?

Some years ago I met a female RAF doctor who was stationed in Afghanistan and had a hard time.

What are your hopes for reader’s to take away from reading Traumata?

That justice means different things to different people, and that in this country (UK) we don’t necessarily have it right. In trying to do three things – deter, punish and protect the public – prison fails in all three. Our judicial system is broken.

What are you working on next?

A psychological thriller about a young girl with special powers, having been born in her caul. Damning evidence shows she has committed a terrible crime, but as she is below the age of legal responsibility she is denied any form of trial and ends up in care.

According to his British passport, Douglas Renwick’s occupation for many years was ‘Government Service’. This included spells in Libya, Malta, Cyprus, Ireland and Germany. He also worked at the Ministry of Defence in London, the Supreme Headquarters of the Allied Powers in Europe in Belgium, the Pentagon in Washington DC, and White Sands Missile Range in New Mexico.

He has spent time in East Berlin, Mexico, Guatemala, Ecuador, Argentina, Egypt, Kenya, Namibia, South Africa, Burma, Cambodia, Laos and Vietnam. He has jumped out of planes, swum across Valetta harbour, skied across the Alps and the Rockies, and been transferred by breeches buoy from one Royal Navy ship to another, at sea and under full steam. He has been down a coal-mine in Yorkshire, a salt-mine in Poland and a nuclear bunker in Essex.

Now a grandfather, retired and living in Kent, time allows him to commit some of his experiences to paper. He prefers writing fiction on the grounds that it is safer.

4 thoughts on “An @Bookollective Interview with Douglas Renwick, Author of Traumata”