I’m utterly thrilled to be part of this Random Things Tour for The Year Without Summer by Guinevere Glasfurd and wish to thank Anne Cater for inviting me to participate. I have The Words Without Summer waiting to be read and having absolutely adored Guinevere’s novel The Words In My Hand, my review of which you can read here, I know I’m in for a treat.

I was also lucky enough to interview Guinevere all about The Words In My Hand here on the blog and it was one of my books of the year in 2017. Since then, however, I’ve had the pleasure of meeting Guinevere Glasfurd in real life as I hosted her at The Deepings Literary Festival last May where she held us spellbound talking about her research.

With an extract to share with you from The Year Without Summer you’ll get an idea of what a beautiful writer Guinevere is.

The Year Without Summer is published today, 6th February 2020 by Two Roads and is available for purchase through the links here.

The Year Without Summer

Mount Tambora explodes in a cataclysmic eruption, killing thousands and causing famine, poverty and riots. Lives, both ordinary and privileged, are changed forever. Sent to investigate, ship surgeon Henry Hogg can barely believe his eyes. Once a paradise,the island is now solid ash, the surrounding sea turned to stone. But worse is yet to come: as the ash cloud rises and covers the sun, the seasons will fail.

1816:
In Switzerland, Mary Shelley finds dark inspiration. Confined inside by the unseasonable weather, thousands of famine refugees stream past her door. In Vermont, preacher Charles Whitlock begs his followers to keep faith as drought dries their wells andtheir livestock starve. In Britain, the ambitious and lovesick painter John Constable struggles to reconcile the idyllic England he paints with the misery that surrounds him. In the Fens, farm labourer Sarah Hobbs has had enough of going hungry while the farmers flaunt their wealth. And Hope Peter, returned from Napoleonic war, finds his family home demolished and a fence gone up in its place. He flees to London, where he falls in with a group of revolutionaries who speak of a better life, whatever the cost.
As desperation sets in, Britain becomes racked with riots – rebellion is in the air.

For fans of David Mitchell and Andrew Miller, The Year Without Summer tells the story of a fateful year when temperatures fell and the summer failed to arrive. It is a story of the books written, the art made; of the journeys taken, of the love longed for and the lives lost.

Six separate lives, connected only by an event many thousands of miles away. Few had heard of Tambora – but none could escape its effects.

An Extract from The Year Without Summer

IF I’D KNOW’D it were wrong, I’d never have done it.

Weren’t anything much anyhow.

Mairster Benton had sent me away from his farm that morning  with nothing  and it was then that I catch’d up with Tessie and I guessed he’d sent her away too.

‘Mornin’,’ I said in greeting, as is only polite and she’s my elder by four years.

‘Mornin’,’ she said back, not looking at me, as if I were the slummocky one though she had the same lack of shoes on as me.

‘Where are you oft to?’ I asked, polite as I could, enquiring. Her striding on, head in the air, as though making for Norwich.

I asked her again and tugged on her sleeve to get her to say.

‘Never you mind, Sarah Hobbs,’ she said and shook my hand free.

Hobbs, was it? I didn’t know Tessie so well, but we’d worked the same fields last year, ’cluding Benton’s, and we were only two alleys apart when we were home so there weren’t need for talking to me as if I were up on high with the rectory folk.

‘Did he not have work for you then either?’

Her shoulders went up and down as though she’d been bumped over a tussock.

On we went like this, me asking and her not saying, though me knowing she was in the same such difficulty as me. I’d walked three miles already from Littleport to Benton’s  farm and now  here we was, halfway through walking those three miles back again. I hadn’t done it for the good of it and neither I knew had she.

‘Are  you going home?’ I asked. The path we were on could take us on further, if we decided we wanted to.

She shrugged again. All that shrugging. She’d only herself to blame if her arms shook off.

‘Because I was thinkin’ of going on to Cook’s farm. To see what’s likely there.’ Well, I had her attention  then, I could tell. By this point, we’d reached the edge of Willow Row and were walking along a ditch. I noticed the spar­ rergras they’d planted alongside were shrunk up as if shy of the light, as if it’d changed its mind and had turned its way back to the earth again. The thought of no sparrergras was a miserable thing. It weren’t the only miserable sight. A mizzlin rain had started, cold as frost.

Tessie’s eyes redded up and not just from the cold and I saw she was crying.

‘Tessie?’  I said and this time when I touched  her she stopped with her long striding ahead. Her name, me saying it, brought  from her such a shudder. She was crying the way you cry when there’s not anyone for miles to see. ‘Tessie, Tessie,’ I said and I rubbed her back. I hadn’t expected this.

There weren’t no place to sit but she sat down anyway and I sat down beside her. I’d have pulled at the cotton grass but there were no grass to pull, nor anything much else come  up  green. Spring had passed us by without resting. I felt the rain, prickling, on its way to snow. No wonder the sparrergras wanted none of it. Still, Tessie and me both had our bonnets on so at least our heads could keep warm, after a fashion.

It was shocking to hear it, so strongly said, though I knew no one around had a good word for him.

‘You’d not!’ I imagined her with a gun, taking aim.

‘I would!’ and I saw then that she meant it.

‘They’d hang you, Tessie. By your neck.’

You would, I thought, but I kept that to meself. ‘What’s he done? He turned you away too?’

She nodded and dipped her head down. I knew she was trying not to cry again even though  her bonnet  had her hid.

‘He  didn’t  want me either.’  Small consolation  to her, adding my own misery to hers, no help at all, in fact. So I put on my Mairster Benton voice: ‘Employ a girl like you when I have my fill of good men?’  Sounded funny how I said it. Hadn’t been funny when he had.

‘Bastid,’ she said again and this time I agreed.

We sat for a while in the prinkling drizzle. I tucked my feet into my skirts to keep the worst of the cold off.

‘He hadn’t work for Thomas either.’ Thomas was her sweetheart, I knew. ‘Says he now has a plough this wide.’ She stretched her arms open as far as she could. ‘Would plough a field as wide as from here to Littleport. No need of Thomas with a plough like that. He said if I wanted to pick up stones he’d pay me half what he did before, elsewise he could get a man who’d do the same for what he paid me last year, only a man would pick up twice as much. He had a choice of fine men, good strong soldiering men more deserving of work than me, he said.’

‘Why’d he not take Thomas on then?’

She looked at me as if I were slower than a snail on dry sand. ‘Thomas told him straight he’d not pick up stones for a girl’s wages. That it weren’t right to put a man to such work.’

Well, yes. If I were a man, I’d be thinking it weren’t fair either. I never liked picking up stones anyway.

‘Benton told him beggars could not be choosers. And Thomas called him a bad ’un and damned him and his new plough and that’s when Benton told him to be gone and never come back.’

‘Bastid!’ I clapp’d my hand over my mouth.

Tessie pushed me on the shoulder and though she were not happy, she gave a small smile.

Now that we were on swearing terms together, we carried on our way in better cheer having decided we’d go on to Park Farm after all and ask after work there.

It was a fair traipse to the farm in the rain. We passed two men dragging a contraption  by hand. So beggardly muddy they were, they’d not even the breath to call after us.

‘Irish,’ she whispered and we hurried on by.

I couldn’t say it, but perhaps the thought was too noisy, chattering away to itself there in my head because then Tessie said, ‘I don’t have no hope we’ll be welcome at Cook’s farm.’

It was proper  blowy when we reached the farm’s fence, there being nothing  on the Fen to keep the wind from blowing how or where it wanted. I was relieved of it raining; there’d be a choke of dust otherwise. Through the gate, the track went on out to a farm at the end. Simple enough to walk down there to the door in a straight line like that. There were straight lines everywhere now since the Bedford Level lot had put in their ditches. Not all the land was fenced off like here at Cook’s farm, with a farmhouse  plonked down in the middle of it, but that didn’t give us the say­so to walk over it. Tessie and I stood there, our feet mired in mud and it had me thinking about the differences between straight and simple.

A notice had been fixed either side of the gate.

Tessie shrugged. ‘Summat else they got to shout about, I suppose. Never could read.’

She gave a look same as to say come on then and reached for my hand.

We’d gone no more than halfway down the track when I stopped and pulled out what I’d had in my pocket all the while. Tessie’s eyes opened up wide when she saw it.

A penknife. Handsome carved, with initials too. I turned it over in my hand and pulled out the blade.

She looked at me full agog. ‘How did you come by it?

Did you steal it?’

I pretended not to hear. One puff of wind would have shivered me all away. Truth was, he’d dropp’d it without noticing and I’d covered it with my foot and whipped it up quick when he looked the other way.

‘Finders keepers,’ I said and skipped ahead. Weren’t much use other than for whittling that I could see, but he weren’t having it back.

And that about served him right.

Guinevere Glasfurd was born in Lancaster and lives near Cambridge with her husband and daughter. Her debut novel, The Words in My Hand, was shortlisted for the 2016 Costa First Novel Award and Authors’ Club Best First Novel Award and was
longlisted in France for the Prix du Roman FNAC. Her writing has also appeared in the Scotsman, Mslexia and The National Galleries of Scotland. 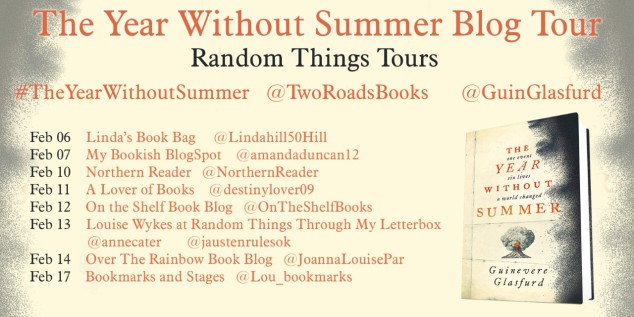