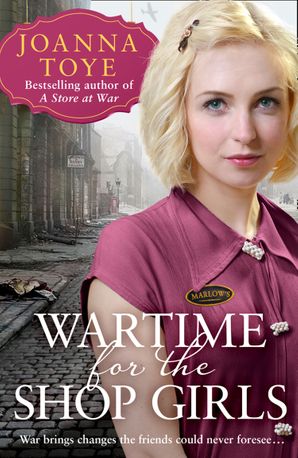 My enormous thanks to Jen Harlow at Harper Collins for inviting me to be part of the blog tour for Wartime for the Shop Girls by Joanna Toye. I have this gorgeous looking book awaiting reading and I’m delighted that Joanna has agreed to stay in with me today to tell me more about it.

Staying in with Joanna Toye

Welcome to Linda’s Book Bag Joanna. Thank you for agreeing to stay in with me.

Thank you for asking me! It’s a nice change from a night in the air raid shelter or huddled under the stairs while the bombs drop….

I expect it is! I think I probably know the answer to this but tell me, which of your books have you brought along to share this evening and why have you chosen it?

You’ve probably gathered by now I’m re-living the Second World War. I’ve brought along Wartime for the Shop Girls, my second book, which was out yesterday 23rd January.

It’s the follow up to my first novel, A Store At War, which introduced Lily, Gladys and Beryl and life behind the shop counter in Marlow’s department store. 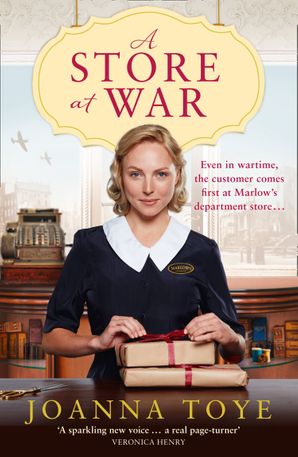 I think they both look fabulous Joanna. What can we expect from an evening in with Wartime for the Shop Girls?

Most of all, I hope enjoyment! Despite it being set in wartime – or maybe because of it – it’s not a dismal read. ‘Uplifting’ and ‘heartwarming’ are a couple of the words that have come up in reviews. It’s about how the characters have to pull together to face up to whatever life throws at them, big and small, and in wartime the challenges were constant. Loved ones were  far away – partings the length of which we can’t imagine. Daily and nightly worries for your own safety, and theirs – no FaceTime, no e-mails, no phone calls then! – and letters months apart, if they came at all. Going to work exhausted after another night of air raids, coming home to a meagre meal. But at the same time, Lily and her friends fret about exactly the same things as today – a promotion at work, a change of routine, clothes, shoes, hair. Most importantly, in Lily’s case, what to do about the boy you really like, but who looks like he might be lured away – not once, but twice in the course of the book. Thankfully she’s got a sense of humour, and her mum, and her mates to turn to. They need her support too – Gladys’s boyfriend goes to sea and Beryl’s having a baby.

I think you’ve described such a compelling story. I’m thrilled that I have Wartime for the Shop Girls waiting to be read.

Right, so I’ve brought my gas mask and tin hat, I doubt we’ll need them, but one for you, too, Linda, just in case.

Oo. I’m really claustrophobic. I’m not sure I like the look of that gas mask Joanna…

And of course, something to eat… sandwiches – there’s meat paste, Bovril or Spam straight from America.

I used to love Spam fritters for lunch when I was at school.

Oh, and a cake made with dried egg (am I treating you or what?) 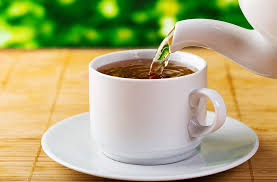 To drink, there’s Vimto or a flask of sugarless tea.  While we tuck in we can listen to some great dance band music  – ‘Red Sails in the Sunset’ is Gladys’s favourite – and to round off we can sing along with Vera Lynn to ‘We’ll Meet Again’. Hope we do,  Linda – and thanks again for asking me!

It’s been my pleasure Joanna. Though once you’ve heard me sing a few bars of We’ll Meet Again I’m not sure you’ll want to stay much longer, let alone come back. I’m tone deaf! Thanks so much for being here and telling me all about Wartime for the Shop Girls. Now, pass those spam sandwiches whilst I tell everyone more about the book:

Wartime for the Shop Girls

It’s 1942 and as shortages of staff – and goods – begin to bite, young Lily Collins is thrilled to step up to sales junior in her job at Marlow’s department store.

But bombs are still falling and Lily and fellow shop girls Gladys and Beryl need a stiff upper lip to wave boyfriends, husbands and brothers goodbye, especially with a baby on the way and grim news on the wireless. When Jim, who works with Lily at the store, seems restless, things are bad enough, but nothing can prepare Lily for the secrets that come tumbling out when her favourite brother comes home on leave…

Somehow, she must keep smiling through. Community, family and friends rally round as her home town – and the whole country – is tested once again.

Wartime for the Shop Girls was published by Harper Collins on 23rd January 2020 and is available for purchase through the links here.

Joanna Toye is a former BBC scriptwriter and producer. She worked for over 30 years on Radio 4’s much-loved ‘The Archers’, as well as on ‘Crossroads’, Family Affairs’, ‘Doctors’ and ‘EastEnders’. She has nine previous TV and radio spin-off books to her credit, but ‘A Store At War’ was her first original novel, the first in a series of four. It draws on her Midland roots and vivid family memories of the Second World War, as well as anecdotes and research into how shopping used to be – long before the internet was ever thought of! 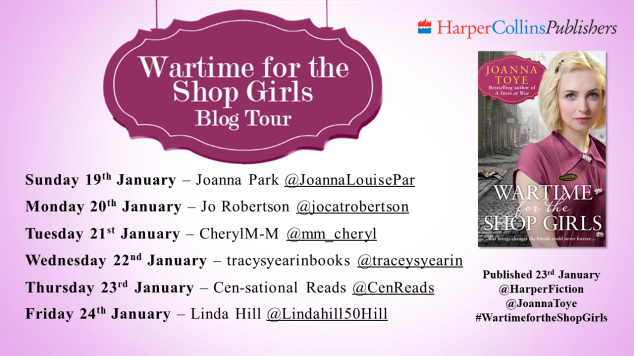