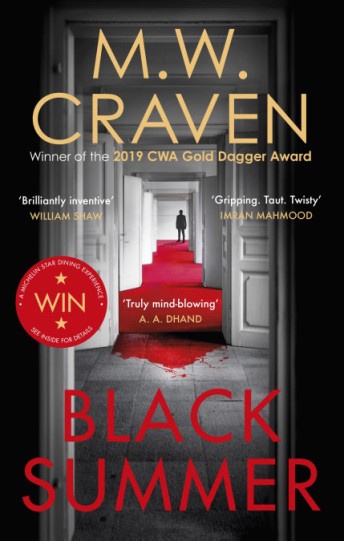 I thought M. W. Craven’s The Puppet Show was an absolutely stunning read. You can see my review here and it will be appearing again in my Books of the Year post at the end of December. I’m sure Mike may have thought I was slightly bonkers when I accosted him at Capital Crime to enthuse about The Puppet Show so incoherently!

Consequently, when M.W. Craven asked if I might be interested in the second book in his Washington and Poe series, Black Summer, I was thrilled. My enormous thanks to Beth Wright at Little Brown for sending me a copy in return for an honest review.

Published by Little Brown imprint Constable, Black Summer is available for purchase through the links here. 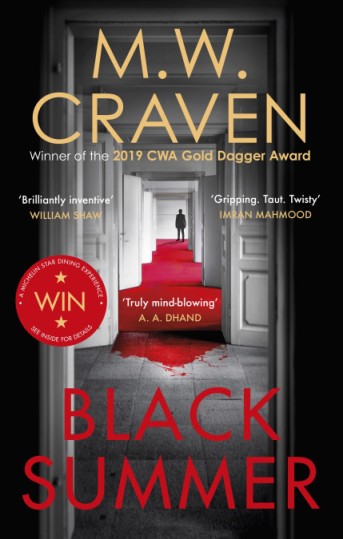 After The Puppet Show, a new storm is coming . . .

Jared Keaton, chef to the stars. Charming. Charismatic. Psychopath . . . He’s currently serving a life sentence for the brutal murder of his daughter, Elizabeth. Her body was never found and Keaton was convicted largely on the testimony of Detective Sergeant Washington Poe.

So when a young woman staggers into a remote police station with irrefutable evidence that she is Elizabeth Keaton, Poe finds himself on the wrong end of an investigation, one that could cost him much more than his career.

Helped by the only person he trusts, the brilliant but socially awkward Tilly Bradshaw, Poe races to answer the only question that matters: how can someone be both dead and alive at the same time?

And then Elizabeth goes missing again – and all paths of investigation lead back to Poe.

The gripping new thriller in the Washington Poe series from M. W. Craven, winner of the CWA Gold Dagger Award for best crime novel of 2019.

My Review of Black Summer

Life is about to get complicated for Washington Poe.

It’s always somewhat terrifying to pick up the second book in a series when you have so loved the first, in case the author hasn’t managed to reproduce as gripping and thrilling a read. Within two sentences of Black Summer I knew I needn’t worry. M. W. Craven is an absolute master storyteller, a fabulous writer and a brilliant plotter. I was captivated and held spellbound throughout. Indeed, although chapters are short, I still had to take small breaks from reading in order to allow my pulse to slow. The tension was frequently unbearable and my response as a reader visceral, making Black Summer an exciting and exhilarating reading experience.

I genuinely believe M. W. Craven is a genius when it comes to plotting. The story in Black Summer is fast paced, tautly constructed and riveting, but it transcends most thrillers because of the frequent mini cliffhangers at the end of chapters, the manner in which Poe has information the reader doesn’t quite have so that there are shocks and surprises along the way, and the sheer brilliance of revelation as the narrative unfolds. This is literary sleight of hand at its most perfect. I loved every moment of being immersed in Black Summer.

I also adored the development of the characters of Washington Poe and Tilly Bradshaw. It is very heartening to have someone like Tilly take a starring role without being portrayed as a victim. She is integrated into the narrative in a natural and organic way so that not only does she feel very real, she is completely authentic. As for Washington Poe, I rather feel I might be slightly in love with him! In all seriousness, I find it hard to remember he isn’t actually a real person because he is so credible and convincing. However, quite scarily, Jared Keaton is just as compelling and realistic so that reading Black Summer has left me with a slight unease I can’t shake off.

Equally convincing as a ‘character’ is the Cumbrian setting. The bleakness, the isolation and the beauty complement the plot wonderfully. The title too is ideal. With truffles, or black gold, playing a role, the approaching physical storm clouds and the potential that this could be Poe’s darkest moment, it suits the book completely. Indeed, I thought the metaphor of the approaching storm was sublime and felt as battered by M. W. Craven’s Black Summer as is Poe by the weather. I genuinely feel as if this book has had a physical effect on me as a reader. I feel shattered having read it.

Black Summer is absolutely brilliant. If you haven’t yet read M. W. Craven, begin with The Puppet Show – not because you need to have read that first book in the series to find Black Summer totally compelling, but because you’re missing an absolute treat if you don’t read BOTH books. They are, quite simply, stunning. 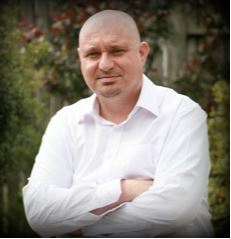 M. W. Craven was born in Carlisle but grew up in Newcastle, returning after 31 years to take up a probation officer position in Whitehaven, eventually working his way up to chief officer grade. Sixteen years later he took the plunge, accepted redundancy and became a full-time author. He now has entirely different motivations for trying to get inside the minds of criminals. His first novel featuring Washington Poe and Tilly Bradshaw, The Puppet Show, was published by Constable to huge acclaim, and won the 2019 CWA Gold Dagger Award.

M. W. Craven lives in Carlisle with his wife, Joanne. When he isn’t out with his springer spaniel, or talking nonsense in the pub, he can usually be found at punk gigs and writing festivals up and down the country.