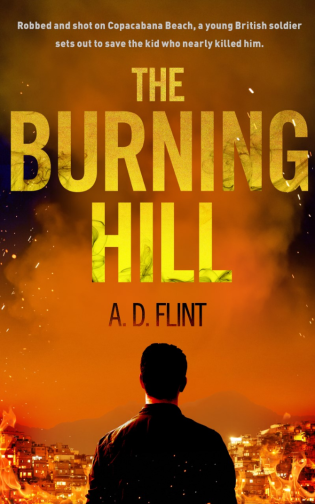 Shortly after we’d landed in Rio a few years ago and we were being transported to our hotel, my husband and I were somewhat disconcerted to be told the coach lights were out and the curtains drawn to make it more difficult for us to be shot on the way. We were also told not to take much money or any valuables when we went out and that it was’t wise for me to wear jewellery. Copacabana beach was to be avoided after dark. Well, we loved Rio and Brazil in spite of the dire warnings.

Since then, I became aware of A.D. Flint’s setting for The Burning Hill was Rio and I having featured 10 things about him here on Linda’s Book Bag, I have been meaning to read the book.

My enormous thanks to A. D. Flint for sending me a copy of The Burning Hill and my apologies that it has taken nine months to reach the top of my TBR.

Published by Unbound, The Burning Hill is available for purchase here.

On the run from unjust court-martial back home, a young British soldier gets robbed and shot on Copacabana Beach. The bullet in Jake’s head should have been fatal but, miraculously, it saves him from a previously undetected condition that soon would have killed him.

Jake doesn’t believe in fate, nor does he feel he owes anything to anybody, but he does hate injustice. Vilson, the teenage favela kid who fired the bullet, is a victim of injustice, in a deadly corner with a corrupt cop and a sadistic drug-lord after his blood.

With a turf war erupting in Vilson’s favela, fear stalks every narrow alleyway, and anyone dragged up to the notorious Burning Hill had better hope they’re dead before they get there. But it’s not just fear that shapes life in the favela: belief is also powerful, able to both save and destroy.

The Burning Hill is about the power of belief and one man’s desire for justice at any cost.

My Review of The Burning Hill

Jake’s escape to Brazil may not be the panacea he’s searching for.

By rights I shouldn’t have enjoyed The Burning Hill. At its heart is the kind of injustice and unfairness that I abhor and there is a level of violence outside my usual reading comfort zone. However, I thought The Burning Hill was a fabulous read because the quality of A.D. Flint’s prose is so finely wrought that he draws in the reader and compels them to continue even as they feel uncomfortable and challenged by the content. Not only is this an exciting and thrilling read, but it is so well written too.

The Burning Hill begins dramatically and maintains the adrenaline throughout. It’s fortunate that chapters are short, which adds to the pace, because I’m not sure my heart could have tolerated the thumping of fear and excitement I experienced reading The Burning Hill. I was enthralled by the story and completely unable to tear myself away even when I found the content disturbing. I had to keep pausing to allow my pulse to subside because A. D. Flint understands exactly how to control his reader’s feelings and emotions.

I found the characters extremely vivid and real. Their flawed personalities and lives are sadly all too familiar to those living in poverty so that A. D. Flint shines an unflinching spotlight on the realities of day to day existence for those caught up in drugs, gangs and violence. Jake is the perfect example of an anti-hero whom the reader cannot help but admire. I found his version of morality a convincing antidote to the corruption of organisations like the police. My heart went out to Vilson so that I wanted him to triumph because I understood perfectly the reasons for his behaviour.

And it is the themes of corruption, the poverty, the sense of family, friendship and identity underpinning the dramatic narrative that add such depth to The Burning Hill. As well as being a very engaging and entertaining thriller, I think The Burning Hill is a hugely important book. A. D. flint does not shy away from presenting the realities of street life in Brazil and his engrossing and well-crafted prose ensures those reading his story are left in no doubt about how so many have to struggle simply to exist. The shimmering undercurrent of superstition adds an extra layer of interest too and I found the concept of honour completely fascinating.

The Burning Hill is a novel I would not usually pick up. Had that been the case I would have missed a gripping narrative, brilliantly written and heart-thumpingly exciting. I really recommend it, regardless of your usual preferred reading genres. It’s a corker!

On a June afternoon in 2000 there was a robbery just a few blocks from where the A.D. Flint  was living in Ipanema, Rio de Janeiro. It turned into a hostage situation. The teenage robber had survived a notorious massacre of street children outside a Rio church years before, and the tragedy that played out in the aftermath of the robbery on live TV news was an embodiment of the desperation of life at the bottom of the heap. An ugly thing in this beautiful city, shocking, even to a society inured to everyday violence.

As an Englishman new to Rio, the author was beguiled by the city, and found it profoundly disturbing to watch something happening just down the road that was so out of control and so wrong. The author spent a year in Brazil and now lives on the south coast of England with his Brazilian wife and two sons.

2 thoughts on “The Burning Hill by A. D. Flint”