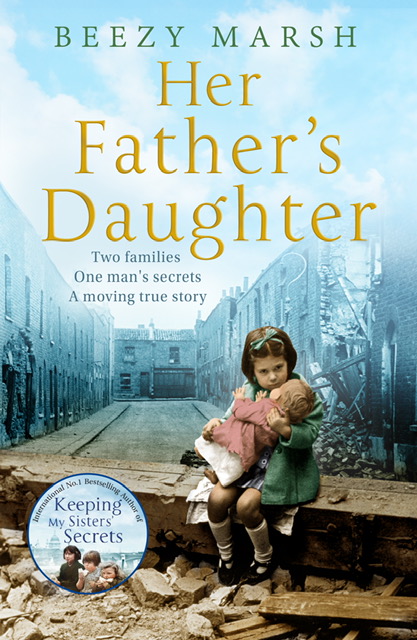 I can’t believe almost a year has passed and I still haven’t had chance to read Beezy Marsh who featured on Linda’s Book Bag when All My Mother’s Secrets was published in August 2018. You can read a fabulous guest post about Beezy’s own family secrets leading to her writing here.

Today Beezy returns to celebrate her latest novel Her Father’s Daughter with another fascinating guest post.

Her Father’s Daughter is published by Pan Macmillan today July 25th 2019 and is available for purchase through the links here.

When Annie marries Harry after years of heartache in a London slum she believes she’s found her happy ever after. But the horrors of the Blitz soon threaten everything they hold dear. The terrible sights Harry witnesses as an air raid warden bring back traumatic memories of his time during the First World War. Suddenly Annie finds herself struggling to cope not only with life in wartime and two little children, but also with a husband who seems like a stranger.

Kitty has always been protective of her little brother Harry. Hiding the scandal about their father from the world was the only way to survive as they were growing up in Newcastle. But when she discovers Harry too has a shocking secret, she is torn. Meanwhile Annie wonders why Harry refuses to discuss his life before their marriage and why she has never met his sister. Will the truth ever come to light?

From the bombed-out terraces of London to the docks of Newcastle, Her Father’s Daughter is a moving and poignant true story about the unbreakable bonds of family, and the power of love to heal the worst wounds.

Laying the Ghosts to Rest

When I was just a teenager, I discovered a family secret so shocking it inspired me to become a writer. More than thirty years later, I have finally laid the ghosts of the past to rest with my new book, Her Father’s Daughter.

Set in the poverty-stricken streets of London and Newcastle in the 1930s and the terrifying Blitz years of WW2, the story uncovers a terrible secret which binds two families who know nothing about each other.

I believe that ordinary lives are extraordinary and unpicking a web of lies on which my family was founded, that became very clear to me. The secret at the heart of my new book is a central thread which unites the storyline but the truth only emerges through the eyes of three women who are all facing their own challenges in the turbulent years of the early 20th century.

We meet Kitty, a feisty suffragette who becomes a journalist and makes sacrifices to keep the truth from future generations. Her little brother Harry is just a boy when they lose their father in the most horrendous circumstances and she vows to protect him, but can’t keep him safe from the horrors of World War One where he fights to regain the family honour.

Harry’s first wife, Ethel, has troubles of her own with her domineering father and her wish to better herself. When Harry takes her from the slums of Newcastle to the bright lights of London to find work, she seizes every opportunity she can – with terrible consequences for their marriage.

Broken by Ethel’s cheating, Harry finds love with caring laundress Annie but the London Blitz brings fresh terrors which reignite Harry’s troubled past. With three young children to raise and a war on, Annie fears she will lose everything and she can’t understand why Harry won’t allow her to meet his sister Kitty.

Most families love to tell tales about an eccentric old aunt or a relative who was determined to grow old disgracefully. But for me, the family history was genuinely very shocking.

The story that my granddad Harry used to tell about his father dying suddenly when he was young was a half-truth to say the least and that set me on the path for years of painstaking research. For reasons that only emerged as I wrote the book, it became clear that Harry and his sister Kitty had compelling reasons to lie. I didn’t judge them as I wrote and I hope readers will find the whole story and being immersed in those turbulent years of the early twentieth century, which I specialise in writing about, really gripping.

I won’t spoil the discovery for the reader but it’s fair to say that the two families at the heart of the book are now reconciled with each other and consider each other one big family. That is the kind of happy ending that is rare after such tragedy.

This sounds brilliant Beezy. With an extraordinary ‘ordinary’ family in my past too I can’t wait to read about your family very soon.

Beezy Marsh is an award-winning journalist, who has spent more than 20 years making the headlines in newspapers including Daily Mail and The Sunday Times. This was never going to be enough for a girl from Hartlepool, whose primary school teacher told her to give up her dream of becoming a poet and concentrate on being a nurse instead. Thirty years later, give or take, she became an author.

Family and relationships are at the heart of her writing and she is a firm believer that sisters, mothers and wives are the glue which binds everything together. She writes romantic fiction, as well as memoir and biography, including her book Keeping My Sisters Secrets, and somehow finds time to write a blog about her life as an imperfect mother to two young boys, in between tackling a never-ending pile of laundry and doing the school run. She is the author of Mad Frank and Sons, alongside the two sons of gangland crime boss, Frank Fraser.

6 thoughts on “Laying the Ghosts to Rest: A Publication Day Guest post by Beezy Marsh, Author of Her Father’s Daughter”