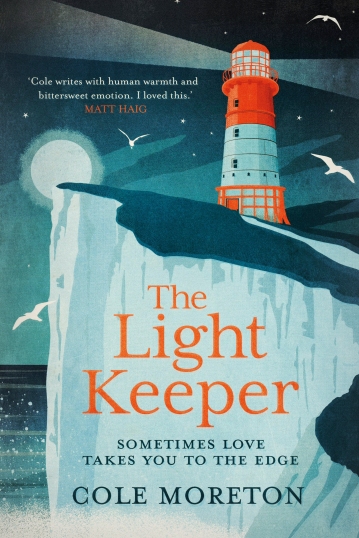 My enormous thanks to the folk at SPCK Publishing for sending me a copy of The Light Keeper by Cole Moreton in return for an honest review. I know it’s really far too early to be blogging my thoughts about The Light Keeper, but I simply couldn’t wait to tell the world about this fabulous book and as the launch campaign starts next week I’m delighted to get it going.

The Light Keeper will be published by SPCK imprint Marylebone House on 15th August 2019 and is available for pre-order here. 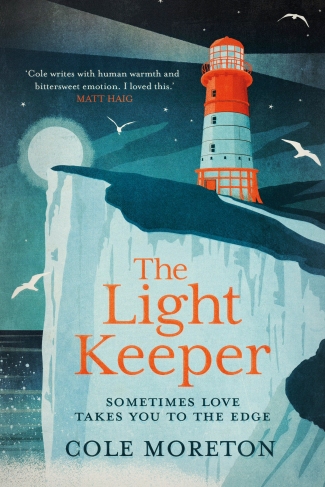 Sarah stands on the brink, arms open wide as if to let the wind carry her away.

She’s come to the high cliffs to be alone, to face the truth about her life, to work out what to do.

Her lover Jack is searching, desperate to find her before it is too late. But Sarah doesn’t want to be found. Not yet. Not by him.

And someone else is seeking answers up here where the seabirds soar – a man known only as the Keeper, living in an old lighthouse right on the cusp of a four-hundred-foot drop. He is all too aware that sometimes love takes you to the edge . . .

My Review of The Light Keeper

Desperate for a baby, Sarah is missing.

The Light Keeper is, quite simply, stunning; beautifully written, emotionally charged and a compelling story.

The plot appears relatively simple in that a man known as the Keeper is doing up an old light house as a bed and breakfast venue, and Sarah has run away from her husband Jack. However, this belies the glorious complexity of emotion, life and relationships swirling and thrumming through this superb character led narrative. What is just fabulous is the part played by characters not actually present, like Sarah’s mother and Ri, or minor characters like Magda and the Chief, because they illustrate how easily our lives can be altered and affected by the actions of others, even if they are not physically present.

Cole Moreton’s depiction of character is just divine. Initially, I held the same rather negative opinion about Sarah that her husband Jack presents to the Keeper, but gradually, skilfully, Cole Moreton manipulates the reader until I felt as close to Sarah as any living person. Similarly, I found the Keeper and Jack totally fascinating. Both have their demons, their sense of loss, but they deal with it differently so that all life seems represented through just two characters. I loved the fact that the Keeper is both a literal keeper of the light house and a metaphorical keeper of spiritual light that contrasts with the established religious light espoused by Magda and the Chief. Once the Keeper’s name is revealed it is totally apposite, but you’ll have to read the book for yourself to discover why. I have no idea if it is intentional, but even the cover art work has the cliff top vegetation looking like a finger pointing the way towards the light, but in this intimate and wonderfully crafted narrative I can’t imagine it’s a coincidence.

Themes are raw and affecting. Infertility, death, relationships and suicide weave through the pages which should make The Light Keeper depressing and uncomfortable. With the skill of Cole Moreton, however, they form a moving, enlightening and beautiful story that held my attention, heart and soul, throughout. There’s a depth of understanding of human nature in The Light Keeper that is breathtaking and made me feel privileged to read it.

The Light Keeper is a searing, intense portrait of loss and grief that holds the reader spellbound. I’d recommend reading this book alone so that there are no interruptions because every syllable deserves the reader’s complete attention. The Light Keeper is one of the most moving and striking books I’ve read and not one I’ll forget. I loved it unconditionally.

Cole Moreton is a writer and broadcaster exploring who we are and what we believe in. His BBC Radio 4 series The Boy Who Gave His Heart Away won multiple awards including Best Documentary in the BBC Radio Awards, Best Writing at the World’s Best Radio Awards in New York and gold for Audio Moment of the Year at the Arias.

Cole writes for the Mail on Sunday and was named Interviewer of the Year at the Press Awards 2016, then shortlisted again in 2018. His work has appeared in the Financial Times, The Guardian, The Telegraph and The Sunday Times, and many other.

The first of Cole’s non-fiction books was Hungry For Home: A Journey To America From The Edge Of Ireland and published by Viking in 2000. This combination of journalism, travelogue and dramatised true events told the story of the evacuation of the Great Blasket Island in County Kerry and followed the journey taken by the islanders to new lives in the United States. It was shortlisted for the prestigious John Llewellyn Rhys Prize for a first book in any genre.

His second book was called My Father Was A Hero (Viking) and told the story of the men and women who returned home to London after WW2 but could not handle peace time. His third book Is God Still An Englishman? How Britain Lost Its Faith (But Found New Soul) was published by Little, Brown. It explores the dramatic changes in British culture and spirituality over the last 30 years and celebrates the possibilities for the future.

His fourth book was a retelling of the story of The Boy Who Gave His Heart Away for HarperCollins. His debut novel The Light Keeper will be published in August 2019.

14 thoughts on “The Light Keeper by Cole Moreton”