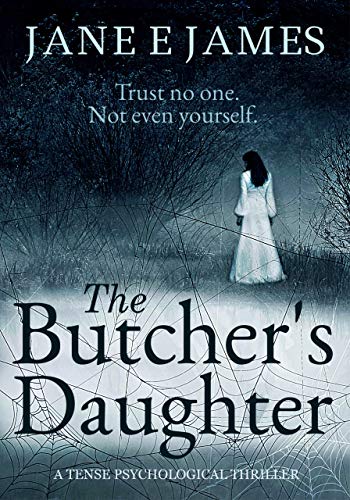 Although I was heavily involved in many of the events at the recent Deepings Literary Festival, one that I couldn’t attend was a free ‘read dating’ held in the library on the Saturday afternoon.

We were trying to showcase local authors, and luckily for us, best-selling author, Jane E James agreed to participate in this popular event. The event was well attended and coincided with the launch of Jane’s latest novel, The Butcher’s Daughter, which is currently climbing the US charts. As Jane’s publisher, Bloodhound Books was one of our generous sponsors for the festival, I thought it time to feature Jane on Linda’s Book Bag.

Trust no one. Not even yourself.

When Natalie Powers returns home for the first time in thirteen years, she must convince everyone she has fully recovered from the mental illness which has seen her institutionalised for most of her young life.

But instead of being welcomed back, Natalie enters a baffling world of deception.She must fight her way through the lies in order to discover the truth about her mother’s sudden disappearance sixteen years earlier. To do this, Natalie must also try to remember hazy memories from the past that continue to haunt her.

In the village of Little Downey, everybody appears to harbour a mysterious secret, including her father, Frank, the village butcher, who refuses to discuss the circumstances surrounding Natalie’s mother’s disappearance. But who can Natalie trust if not her own father? Especially when it becomes clear her protector and confidante, Dr Moses, is not all he appears.

Meanwhile a spate of unexplained clifftop suicides has seen the seaside resort go into decline. Are the villagers somehow involved or is something more sinister at work?

Determined to find out what happened to her mother, Natalie must make sure her own frailty and self-doubt does not catapult her back to the mental institution before she can uncover the truth.

The Butcher’s Daughter is available for purchase on Amazon.

I’m delighted to be able to share some exciting news about The Butcher’s Daughter in today’s blog post that illustrates just how being local to the Deepings and taking part in the biennial festival might be a very good thing indeed. Here’s what Jane told me:

From The Deepings to Downtown New York…

At the time of writing The Butcher’s Daughter is sitting at number 22 in the Amazon US best seller chart for psychological fiction and ranked 5th in hot new releases, sitting next to S E Lynes and Sue Watson’s latest offerings. With Amazon selling close to 1.8 million books at any one time, Jane is rather chuffed with this achievement.

Part of this success has earned Jane an invitation to New York, to visit the aptly-named The Butcher’s Daughter, to talk about her book. Surprisingly, or perhaps because of the content of her book, Jane is a vegetarian. In the acknowledgement section of her book she describes how visiting slaughterhouses and butcher shops as research for her writing changed her mind set about eating meat.

The Butcher’s Daughter was originally written by Jane as a screenplay and very nearly made it to the big screen. Having recently been in touch again with the same producer (making sure he has a copy of her book) she is hoping that may still happen!

In the meantime, Jane is keeping it real. As we speak, she is camping in Cornwall with her lovely hubby hoping that the rain will eventually stop.

(I hope so too Jane! Although I’m sure you could make some notes about the weather for your next book!)

Jane likes to create chilling reads that appeal to fans of psychological thrillers, mysteries and dark fiction. She loves to weave tense and haunting tales that stay in the reader’s mind. All her books are standalone novels.

Jane signed a two-book publishing deal with Bloodhound Books after her second novel, The Crying Boy (a compelling suspense thriller inspired by actual events) became an overnight best seller on Amazon, knocking both Stephen King and Dean Koontz off the top suspense spot.

When she isn’t writing (or reading) Jane enjoys living ‘the good life’ in the Cambridgeshire countryside with her ‘all-action-super-hero’ hubby. Rebecca, Carrie, The Woman in Black and Wuthering Heights are among some of Jane’s favourite reads.

12 thoughts on “From The Deepings to Downtown New York… Featuring Jane E James, Author of The Butcher’s daughter”