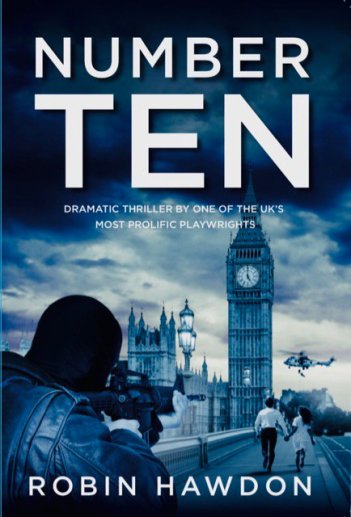 This is going to be a longer blog post introduction than usual! Reviewing Number Ten has a special relevance for me, not least because I have previously featured Robin Hawdon’s writing before on Linda’s Book Bag when I reviewed his children’s book Charley Poon’s Pomes here.

Also, one of the best books I have ever read and which I still recommend at every available opportunity, was written by another member of Robin’s family, Lindsay Hawdon. I reviewed Lindsay’s Jakob’s Colours here when I very first began blogging (although the blog has evolved somewhat since then) and I was privileged to interview Lindsay about it when Linda’s Book Bag was a year old. That post can be found here.

Now add into the mix Jason Hewitt, whose own brilliant Devastation Road was another of the very early books I reviewed here, who contacted me and asked it I would be prepared to review Number Ten. Jason interviewed the much missed Vanessa Lafaye on the blog when her stunning At First Light was published. You can find out all about that here and read my review of At First Light here. With so many fabulous authors and books in the mix you can begin to see why I feel so emotionally involved in this blog post and I couldn’t resist accepting Robin Hawdon’s Number Ten too – even if I do genuinely have over 900 hard copies of books awaiting reading!

Number Ten was published by Brown Dog Books on 9th April 2019 and is available for purchase here. My enormous thanks to Jason Hewitt for sending me a copy in return for an honest review. 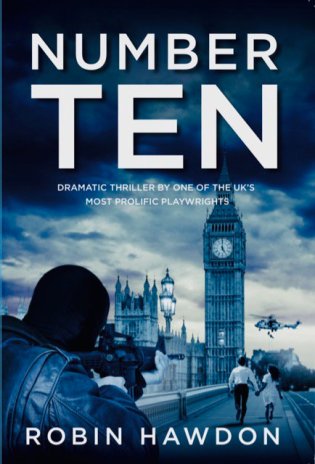 No-one knows whether they were organised by business magnates, criminal oligarchs, or jihadist extremists, all of whom are threatened by his rule.

What is known is that they are getting information from inside Number Ten Downing Street.

Paul Gunter, bright young member of the PM’s staff, is arrested by MI5 in the middle of the night, and finds himself falsely implicated in the assassination attempt. He has to fight for his life against all involved parties, using his inside knowledge of Downing Street processes, and the reluctant help of senior staff member, Andrea Holt, to extricate himself.

Will the pair survive against vastly superior forces?

Will James Torrence and his fragile government endure amidst the revelations?

Will love win out against political intrigue?

Suspense, romance, and high action ranging across modern London’s extraordinary cityscape and beyond. Explosive new post-Brexit thriller from one of Britain’s most prolific writers.

My Review of Number Ten

A series of bomb attacks leads to a tangled web of action.

Wow. Number Ten begins in explosive fashion and maintains a high-octane, fast pace until the very last word. Reading Number Ten felt akin to riding a rather breathtaking fairground ride and I hardly had time to catch my breath. Although this is fiction, so many similar events to those in the plot have happened recently here in the UK and abroad in countries like Sri Lanka, after Number Ten‘s publication, that any suspension of disbelief that might have been needed simply evaporated. The action in Number Ten felt real, vivid and only too scarily possible.

It is obvious that Robin Hawdon writes with a director’s eye. He understands exactly what information is needed to hook the reader, to create setting and to drive the action, making reading the book an almost cinematic experience. Number Ten would translate into the most fabulous television series because the pace is perfect and there are surprises that shock in a scenario that is utterly believable. On occasion, the reader only receives information at the same time as the characters so that it feels as if you’re part of the action too. Indeed, I found the quality of the writing completely engaging. The present tense used for Rafik creates an immediacy and ongoing threat and those passages involving Paul are slick, sophisticated and superbly crafted. I think the natural quality of the direct speech adds to the sensation that Number Ten is something special.

I thoroughly enjoyed the characterisation and as I abhor injustice I was immediately on Paul’s side even before I’d been given all the information about him. It came as no surprise to me that there is corruption in the heart of power and that a minion like Paul can be used and abused by both that power and external forces. I thoroughly enjoyed the manner in which the mundane elements of his life prove essential in what is happening to him, although I can’t say too much for fear of spoiling the plot for others. Themes of corruption, love, loyalty, betrayal, threat, politics in many forms, idealism, policing – I could go on – weave their way through this exciting story so naturally, making Number Ten all the more captivating.

I so enjoyed Number Ten. If I say that I had to give up trying to sleep at three in the morning because I only had 40 pages or so left to read and I kept wondering what was happening in my absence, you’ll know how powerful a hold the narrative had on me.  Number Ten is a glorious thriller that kept me enthralled throughout. I really recommend it.

Dividing his time between Bath, Australia and the South of France, actor, playwright and grandfather Robin Hawdon has enjoyed a successful forty year career in the entertainment industry. During the early years he was a regular face on British TV — appearing in many series and co-starring with Michael Crawford in ITV’s ‘Chalk and Cheese’ and starring in a number of films. He has trod the boards as Hamlet, Henry V and Henry Higgins in Pygmalion and in leading roles in London’s West End.

Later his love of writing dominated his career and he is now recognised as one of the UK’s most prolific comedy playwrights —with productions including The Mating Game which has played in over thirty countries and Don’t Dress For Dinner which ran in the West End for six years before playing on Broadway and around the English speaking world. Many of his plays are published by Samuel French and Josef Weinberger. Robin has also directed a number of stage productions, and in the 1980’s founded the Bath Fringe festival, and subsequently became Director of the Theatre Royal Bath, England’s premier touring theatre.

He has written several novels including A Rustle in the Grass, published by Hutchinsons in 1984 and republished recently by Thistle. A second novel, The Journey was published in 2002 by Hawthorns and a third, Survival of the Fittest, by SBPR in 2013.

You can find out more about Robin on his website and by following him on Twitter @AUTHORDEBATE.