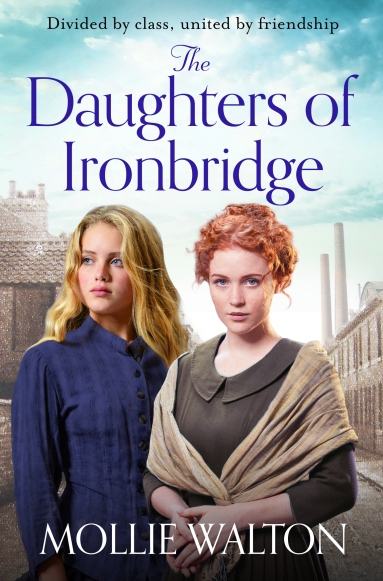 My enormous thanks to Rebecca Mascull, aka Mollie Walton, for ensuring I received a copy of The Daughters of Ironbridge in return for an honest review. This author has a special place in my blogger heart because the launch of Song of the Sea Maid was one of the first bookish events I went to as a blogger and I wrote all about it here, interviewing Rebecca about the book here. I also reviewed Song of the Sea Maid here and another of Rebecca’s books, Miss Marley, completed as a tribute to her friend and fellow novelist Vanessa Lafaye, here.

The Daughters of Ironbridge was published by Zaffre on 18th April 2019 and is available for purchase here.

The Daughters of Ironbridge 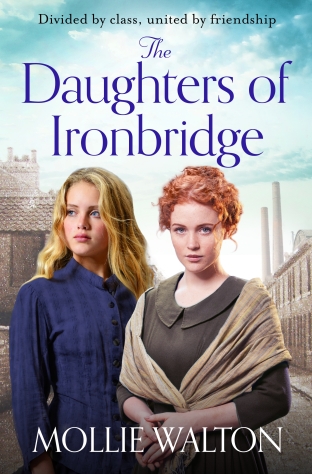 Anny Woodvine’s family has worked at the ironworks for as long as she can remember. The brightest child in her road and the first in her family to learn to read, Anny has big dreams. So, when she is asked to run messages for the King family, she grabs the opportunity with both hands.

Margaret King is surrounded by privilege and wealth. But behind closed doors, nothing is what it seems. When Anny arrives, Margaret finds her first ally and friend. Together they plan to change their lives.

But as disaster looms over the ironworks, Margaret and Anny find themselves surrounded by secrets and betrayal. Can they hold true to each other and overcome their fate? Or are they destined to repeat the mistakes of the past?

My Review of The Daughters of Ironbridge

Anny and Margaret form an unlikely friendship across society’s boundaries.

I so enjoyed The Daughters of Ironbridge because there’s a fabulous authenticity to the era presented by Mollie Walton. Her use of dialogue, dialect and her presentation of class differences in particular, draw in the reader to a vibrant and genuine setting. Having been to Ironbridge, I could see just how much assiduous and relevant research has gone in to creating a town that lifts from the page into sharp reality. It was as if I were actually there as I read.

The plot is a cracker. It starts relatively gently with Anny and Margaret becoming friends but builds and builds, creating real tension so that I wasn’t sure quite how this story would resolve itself. I found it hugely satisfying to read. Not everything resolved itself as I anticipated (or perhaps wanted) and so I’m now hooked into the story and desperate to know what happens next in the series.

Anny is a wonderful creation and she was the one who held my affections most, because I most identified with her. Her desire to better herself and the way Mollie Walton weaves in the importance of literacy and education to Anny’s life is a universal theme that I could relate to completely. Indeed, I felt The Daughters of Ironbridge was a surprisingly feminist read with a depth I wasn’t quite expecting and the journeys of self-discovery for Anny and Margaret are as relevant to anybody today as they were to women of their era. However, I really appreciated the balance of characters too. There are positive and negative characters of both sexes so that The Daughters of Ironbridge feels well-rounded and balanced in spite of the main plot elements (about which I won’t say more. You’ll have to read the book for yourself!)

Themes of poverty and wealth, cruelty and altruism, love and brutality give layers of interest that make The Daughters of Ironbridge a smashing story. It truly does have everything a lover of the saga genre wants in a narrative.

It’s some time since I read a saga and what a perfect example of women’s saga fiction The Daughters of Ironbridge is. Mollie Walton has created a glorious world of history, society, family and friendship, love and hate that slots right in to the genre without a glitch and has reignited my interest in this type of writing. I loved the way this first book in the series ends and can’t wait to find out what happens next. Brilliant! 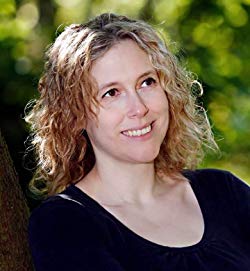 She has always been fascinated by history and on a trip to Shropshire, while gazing down from the iron bridge, found the inspiration for what has become her debut saga novel, part of a trilogy titled The Ironbridge Saga, published by Bonnier Zaffre.

Under the pen-name Rebecca Mascull, she is the author of three historical novels, The Visitors, Song of the Sea Maid and Wild Air.

She has also recently completed the final chapters of her friend and fellow novelist Vanessa Lafaye’s final work, a novella called Miss Marley, a prequel to Dickens’ A Christmas Carol.

Rebecca has previously worked in education, has a Masters in Writing and lives by the sea in the east of England.

3 thoughts on “The Daughters of Ironbridge by Mollie Walton”