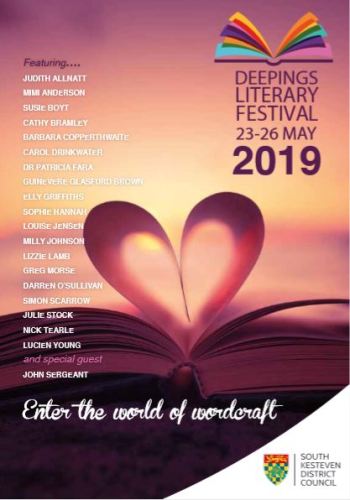 Regular Linda’s Book Bag readers know that I am involved in the Deepings’ Literary Festival which takes place from 23rd to 26th May 2019. It’s the second such festival and you can find out more and book tickets here. We have a brilliant line up of authors and a mix of events to suit everyone so do take a look. Tickets are going fast!

I was fortunate to attend several events at the first festival held in 2017 (which you can read about here). Also at that festival I was thrilled to be able to interview Alison Bruce, author of both non-fiction books and the DC Gary Goodhew crime books set in Cambridge. You can also read my review of Alison’s Cambridge Black here.

On Tuesday this week we had the the first of our run-up events to this year’s literary festival; Crime Around the Fireside with Alison Bruce which was held in the Waterton Arms.

After a quick committee photo we joined others around the fireside to listen to Alison tell us all about her writing.

Alison latest book, the stand alone psychological thriller I Did It For Us has just been released by Little Brown imprint, Constable, and is available for purchase through these links. As Alison couldn’t say too much about I Did It For Us as she didn’t want to spoil the read, I thought I’d just tell you a bit about it before saying more about the evening:

I Did It For Us

From the first time I saw them together I knew it felt wrong. I didn’t like the way he touched her or the self-conscious way he played with Molly and Luke. Joanne saw none of it of course. So I did it to prove to her that she was wrong. I did it for us.

Emily’s instincts tell her that best friend Joanne’s new boyfriend is bad news. Emily fears for Joanne. Fears for Joanne’s children. But Joanne won’t listen because she’s in love. So Emily watches, and waits . . . and then she makes a choice.

But Emily has a past, and secrets too. And is she really as good a friend to Joanne as she claims?

Although she didn’t want to spoil the read, Alison did say that the inspiration for I Did It For Us came in a flash when she was attending (as many of us have and do) Crime in the Court, and that the time scale from that first visualisation of the book to it being signed was a mere 10 days.

Alison is the most amazing speaker and held us captivated throughout the evening. Given that I am supposed to be finishing my own languishing novel this year, albeit in a different genre, I was fascinated to hear about Alison’s writing process and experiences.

Sharing how she first thought of the perfect way to murder someone on her way to work Alison explained how her first book took around five years to write and over time she has probably ditched about 250,000 words. She had originally decided to divide her first book in to 12 chapters but it subsequently became 91 and she advised new writers to consider how we often read in short chunks on e-readers so short accessible chapters fit the bill perfectly. Interestingly, when Alison bins her writing she leaves it there. She doesn’t rewrite it or save it for another part of her work.

In Alison’s experience the second book is the hardest to write because the initial ideas have been used and links need to be consistent in a series of books. It was interesting to find Alison’s first completed book actually became the third in her DC Gary Goodhew series as a result of her meetings with agents and her publisher. I was heartened to find Alison thinks a writer’s ‘voice’ becomes embedded and second nature after about 100,000 words – there’s hope for me yet!

Alison is very much a plotter. She writes so many notes and checks details personally so that the actual writing of the books is now easier for her. I’m not sure I’d go wandering around alone at 1AM in insalubrious places just to see how threatening it might be for a character though! In fact, Alison is so passionate about the accuracy of her writing she has done everything from drawn sketches on location, through finding her own Home Office pathologist to call on for technical details to studying for a degree in crime and investigation.

Alison also suggested that new writers might try different ways of approaching their writing. She has tried dictating in her garden shed, writing hidden under a table at an event, using a computer and writing longhand. She’s even completed over 9,200 words in 24 hours with a deadline looming though I’m not sure she’d recommend that approach too often!

It was a really entertaining and interesting evening listening to Alison talk about criminology, writing and the publication process. I left feeling doubly inspired. Firstly Alison has made me want to progress my own writing and, excitingly, I can’t wait to read I Did It For Us!

Alison Bruce is the author of eight crime novels and two non-fiction titles. Her first novel, Cambridge Blue (2008), was described by Publishers Weekly as an ‘assured debut’ and introduced both detective, DC Gary Goodhew, and her trademark Cambridge setting. She went on to complete the DC Goodhew series with a further six novels before writing the psychological thriller I Did It for Us.

​Alison Bruce was born in Croydon and grew up in Wiltshire before moving to Cambridgeshire in 1998. Alison worked as an electroplater, taxi driving and band promoter and spent ten years working in the IT industry before leaving to concentrate on completing her first novel.

Alison is a proud supporter of local libraries and is the patron of Lakenheath Library in Suffolk. Alison teaches creative writing at Anglia Ruskin University, Cambridge.

15 thoughts on “Crime Around the Fireside with Alison Bruce”