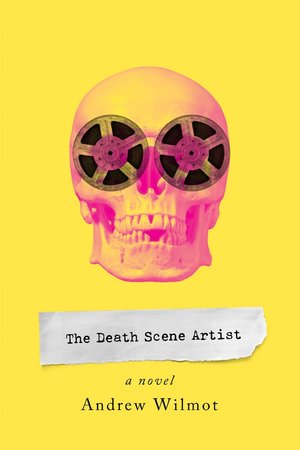 Now you all know how I try to avoid horror in my reading because I’m such a wimp! To try to persuade me to give it more of a try I am delighted to welcome Andrew Wilmot to Linda’s Book Bag today to tell me about his debut which falls into the horror genre.

Staying in with Andrew Wilmot

Welcome to Linda’s Book Bag, Andrew. Thank you for agreeing to stay in with me.

My pleasure—thank you for the invite, Linda!

I’ve brought my first novel, The Death Scene Artist, because nothing says “let’s have a quiet, cozy evening” like an anti-love story about body dysmorphia, Hollywood, and losing one’s identity in a desperate bid to win another’s affections! Also, there’s death. A lot of it. Some dismemberment, too. Did I mention this was literary horror?

(I’m feeling unnerved already. I’ll just get a cushion in case I need to hide behind it as we chat!)

What can we expect from an evening in with The Death Scene Artist?

Oh, gosh… well I already mentioned that it’s horror, and *checks notes* the bits about death and dismemberment. Apart from that, you can expect, well, lies, I suppose. A great many of them. This is a novel starring a desperately unreliable narrator about an equally unreliable former love interest centred in and around an entire industry that exists only to sell the world bad bills of goods and impossible hopes and dreams. Beyond that, though, the core of the story has to do with envy—with what we hate about ourselves, what we see and want in the lives (and bodies) of others, and just how willing we are to lose our personal humanity in a quest to achieve someone else’s ideal life while not living our own. And envy is nothing if not violent and (self-) destructive…

(Actually, Andrew, I think The Death Scene Artist sounds utterly fascinating. I may just have to get over my fear of horror in fiction. I can always sleep with the light on…)

What else have I brought, you ask? A YouTube playlist of some of cinema’s greatest death scenes (chief among them, Johnny Depp’s fountain of blood from A Nightmare on Elm Street), a grab bag of horror films and TV shows ranging from good (Halloween) to great (Netflix’s The Haunting of Hill House) to so-bad-it’s-great (Event Horizon… okay, I know, it’s terrible, but… also… kinda amazing).

No food or drink, though. As a matter of fact, though, given that some of the book deals explicitly with body dysmorphia and eating disorders, I’d like to instead be serious for a moment and mention instead the other thing I brought alone: the NEDA helpline and website for anyone in need of help.

That’s actually a very important thing to do Andrew. If it’s OK with you, I’ll add the UK eating disorder link to BEAT too. Thanks so much for staying in with me and telling me about The Death Scene Artist. It sounds an amazing book.

M_____ is dying of cancer. Only thirty-two, an extra with a meagre list of credits to their name and afraid of being forgotten, M_____ starts recounting the strange, fantastic, and ultimately tragic path of their love affair with the world’s greatest living “redshirt”–a man who has died or appeared dead in nearly eight hundred film and television roles.

In a compelling narrative of blog entries interspersed with film script excerpts, The Death Scene Artist immerses readers in a three-act surrealist exploration of the obsessive fault-finding of body dysmorphia and the dangerous desires of a man who has lived several hundred half-minute lives without having ever experienced his own.

Published by Wolsak and Wynn, The Death Scene Artist is available for purchase here and directly from the publisher. 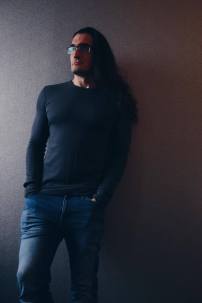 Andrew Wilmot is a writer, editor, and artist living in Toronto, ON. He holds a BFA in Visual Arts (with a minor in Film and Video Studies) and a master’s degree in Publishing, both from SFU.

In his day job he works as a freelance book reviewer, academic editor, and substantive and copy editor with several independent presses and publications, including the online zine Anathema: Spec from the Margins, for which he is Co-Editor-in-Chief.

By night he spends his time writing and painting large, synaesthetic canvases.

Much of Andrew’s written work focuses on the intersections of art, identity, and the body, often with a healthy dose of surrealist horror. To date his work has been published in Found Press, The Singularity, Glittership, Drive In Tales, Turn to Ash, and Those Who Make Us: Canadian Creature, Myth, and Monster Stories, and he was the winner of the 2015 Friends of Merril Short Story Contest. The Death Scene Artist is his first novel.

3 thoughts on “Staying in with Andrew Wilmot”