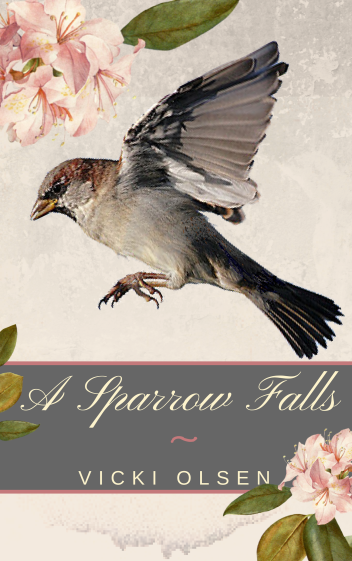 I’m delighted to welcome Vicki Olsen to Linda’s Book Bag today to stay in with me and tell me all about her debut novel – not least because her authorship story makes me think there’s hope for me yet as a potential writer.

Staying in with Vicki Olsen

Welcome to Linda’s Book Bag Vicki. Thank you for agreeing to stay in with me.

I’m happy to be here!  Thank you for inviting me to sit on your couch, where so many talented writers have sat since you started this feature.

(I’m thrilled with how successful it’s been actually Vicki!)

I brought my debut novel, A Sparrow Falls.  I first started writing this in 2009, so it’s good to finally have it published.  The publication date for the paperback is December 4, 2018, which happens to be my 70th birthday.

(Oo. Happy slightly belated actual and book birthday for 4th December Vicki. I find the length of time it’s taken you to get to publication very inspiring.)

It’s the first book in a series which will be set in the fictional town of Tolerance, Arkansas. Yes, I am copying another writer from Arkansas. John Grisham set many of his books in the fictional Clanton, Mississippi in the equally fictional Ford County. But I’m not concerned about Mr. Grisham crying “foul” since William Faulkner had Yoknapatawpha County , Mississippi before either Mr. Grisham or I was born.  Both Mr. Grisham and Mr. Faulkner are fine southern gentlemen whose company I always enjoy.

What can we expect from an evening in with A Sparrow Falls?

It isn’t an easy story to tell and some readers may shy away because of the subject matter. But it deals with an important subject, and I think I have managed to present it in a way that doesn’t make the reader uncomfortable, but at the same time does not mineralize a serious problem. It is the subject of child sexual abuse. There is a lot of heartbreak in this book. But there’s a lot of good too.

(I think that’s the beauty of books, Vicki, they enable us to confront difficult subjects in a non-threatening way.)

I hope readers will like the protagonist, Sarah, as much as I do. I actually fell in love with her before I even started to write this book. I have lived with her for nine years now.

(I love how characters refuse to go away…)

I first met Sarah as an adult minor character in different book. She had a different name then, but she spoke to me from the pages of a book I was helping a friend write. My friend was a 79 year old retired actor who was writing his first novel. When he finished writing the book, I suggested that Sarah was the most interesting character in his book and he should tell her story.  He suggested collaboration and I agreed.  As we began, he was writing her adult story and I was writing her childhood. I didn’t like who she was turning in to under his pen and he soon lost interest in the project.  Over time, I changed the title, changed her name and ditched the storyline. But Sarah was still there begging to tell her story her way. I stopped fighting her and let her do it.

(Always best to do what your characters ask you I think!)

Sometimes a character just takes over the writers mind…I was writing a scene where she finds a puppy. I decided to name the dog Spot, like in the Dick and Jane books. So, I went back and changed the description of the dog, so that Spot would be a logical name. After all the changes, I started to write the line “I’m gonna name you Spot.” But when I started to type, I typed “I’m gonna name you Joy.” WOW!  Where did that come from? I never even considered that name. Sarah wanted her dog to be named Joy.

(That’s ever so slightly scary actually.)

I brought a tape of the songs from the book. Music plays a special role in the novel. It is set in the 50’s and 60’s. The music of this time is in the DNA of anyone who lived through it. I use the music to set the mood. It is evocative of the complexities of the times as our culture in America and in Europe as well moved from a time of innocence and began to evolve a political and social consciousness. This tape has The Beach Boys, The Beatles, The Kinks and the Rolling Stones. It also has Johnny Cash and Sam the Sham and the Pharaohs and The Dave Clark Five.

(Now you’re talking my era – and a bit before – I bet there will be some earworms for readers with those artists.)

I also brought a few items mentioned in the Prologue: A gold gross on a chain, a Nancy Drew book, a high school ring and a picture of Jesus.

This is the Prologue:

She looks around her bedroom at what else she is leaving behind. Pressed and dried yellow rose corsage pinned to her bulletin board, fifteen Nancy Drew books—she’d given up on collecting the entire set, Dolly, one eye closed, the Bible she got the day of her baptism, and the picture of Jesus hanging on the nail she had hung it on the day she got it. I was mad at Him for so long.

She picks up the box, starts out the door and turns to take one last look. She goes back, takes the picture of Jesus off the wall and puts it in the box, with Charlie’s Bible. Around her neck are a small gold cross and two wedding bands tied to a pale yellow ribbon.

(That’s a really enticing snippet that makes me want to read the book straight away.)

I also brought a reader review:

I read A Sparrow Falls and it resonated deep in my soul. Sarah’s story really stayed with me. It has been a few weeks and a few books since I finished it and my mind still wanders to Sarah. I went through an emotional rollercoaster with Sarah but we came out the other side. I highly recommend this book and look forward to more from Ms.Olsen in the future!

(That’s a lovely endorsement. You must be very pleased to receive such a review.)

I start each chapter with scripture. The scripture foretells what will happen in the chapter.  But this is by no means a book about religion. I use it as a backdrop representative of southern culture of the period.

(Sounds interesting. I love trying to match these kind of aspects with what happens in the text as I read Vicky.)

The next book is also about Sarah and what happens to her after she leaves Tolerance. It‘s  a much happier story—and it has real Hippies.

(Oh, we all have a bit of hippy inside us I think!)

Thanks so much for staying in with me to chat about A Sparrow Falls Vicki. You certainly have me intrigued. I wish you a happy birthday for 4th December and every success with the book.

Doors were never locked, in Tolerance, Arkansas in the 1950’s. Everyone went to church on Sunday and the corner grocer extended credit, never asking for a credit card. Things were good —the age of innocence in America that laid the foundation for the sexual and Cultural Revolution that was to explode onto the scene in the sixties.

But for Sarah Jones, a glimpse into the shadows snatched away her childhood innocence. Her way of dealing with the despicable acts committed against her threatened to destroy who she truly was.

Can she find the inner strength to overcome her past?

Can she see that letting go of the desire to punish oneself is often the hardest act of forgiveness?

A Sparrow Falls is available for purchase here.

Vicki describes herself as an Air Force brat who grew up in Arkansas, Louisiana, Texas, Illinois, Idaho and Germany.

After earning a Bachelor’s Degree in Marketing and Economics from the University of Arkansas, she worked as an insurance adjuster, a corporate paralegal and owned an antiques and gifts shop in Dallas. Leaving her ex-husband and grown children in Texas, she now lives in Arkansas with ten goldfish and an array of African violets.

Vicki’s works explore themes of fate and man’s inhumanity to man. Her stories about common people are influenced by a tradition of southern storytelling.

2 thoughts on “Staying in with Vicki Olsen”