Having visited India earlier in the year, I’ve become slightly obsessed by that wonderful country so it gives me enormous pleasure to welcome back Barbara L. Baer to Linda’s Book Bag today with a fabulous guest post all about how memory and invention have created her Indian setting in celebration of her latest book The Last Devadasi. Barbara previously stayed in with me to tell me about another of her books, The Ballet Lover, in a post that you can read here.

Published by Open Books, The Last Devadasi is available for purchase on your local Amazon site and directly from the publisher. 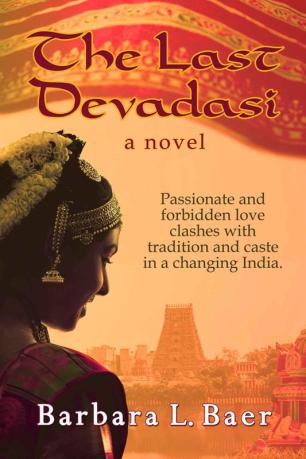 Passionate and forbidden love clashes with tradition and caste in a changing India.

Kamala Kumari is more than a Gemini Studio starlet: she’s a classical dancer trained in the age-old line of Devadasis, a caste set in place a thousand years ago when girls were first dedicated in south Indian temples to serve the gods and men. From the promise of art and devotion, the sacred dancers fell into the hands of priests who both exalted and betrayed them. Beautiful, brilliant and proud, Kamala struggles to escape the old ways, entangling her Indian assistant, Dutch lover, and his young American wife.

With its turbulent passions amid social upheavals, The Last Devadasi takes readers on a sensual feast in the 1970s palm-shaded trading city of Madras.

The Last Devadasi opens in January 1970 in a convent during a typhoon flooding the coastal town of Pondicherry, a French protectorate in Madras State. The novel then moves to a film set at Gemini Studios in the city of Madras (now Chennai); from there we go to the port area of Georgetown, the colonial-era hotel The Connemara, and an overgrown compound with cobras in the brush. I wrote Devadasi over several decades from memory and journal entries I kept during my three years living in South India. Where I needed to add to the places, people, music, street noises and smells I remembered, I did research but mostly the story of four people whose lives cross in Madras came from memory and invention.

When I lived in Madras, I taught English literature at a woman’s college, but as soon as classes ended, I bicycled to a thatched roof studio where I studied the traditional dance form of Bharatanatayam with the greatest South Indian artist of her time, Balaswaraswati. By the time I became her pupil, the majestic woman had been showered with awards in India and all over the world, but in her youth, she’d struggled against the stigma of her birth: Balasaraswati was born into the Devadasi caste.

At the time, I researched the Devadasi caste, that literally means the servant of the god, a caste that originated in its South Indian form a thousand years ago when devotees were married to a god and dedicated to serving him. Devadasis were often the only literate woman, schooled in sacred learning, singing and dancing, indispensible in ritual worship. The girls from a young age were also sexual servants, and today, an even more corrupted form of dedication happens every year when the poorest are brought to a goddess of fertility until a man claims them.

For the novel, I created a central character, Kamala Kumari, young and beautiful, a cinema starlet at Gemini Studios, where, like Bollywood, low-budget musical films are churned out every year. Even as Kamala has her picture on movie magazine covers, she still feels compelled to hide her Devadasi caste origins. The characters she loves and envies, bewitches and betrays, are drawn into her deception. This is The Last Devadasi, drawn from experience, transformed in my imagination to emerge as fiction.

(I think The Last Devadasi sounds completely wonderful Barbara. Thanks so much for telling us more about how it came into being.)

Barbara grew up in California, got her BA and MA at Stanford University before going to South India to teach, study dance, and have experiences unlike anything in her American life. She taught in Madras (now Chennai) and Tashkent, Uzbekistan, then part of the USSR, which gave her the inspiration and voice for her novella, Grisha the Scrivener. After a decade of encounters and adventures, she returned to the US, taught at Dennison University in Granville, Ohio, worked for newspapers, and wrote fiction and travel pieces.

Barbara has lived many years in Sonoma County, California, where she writes, edits and teaches through the county jail program, tends a garden and an orchard of pomegranates and olives, and is active in environmental and political causes. She lives with her husband, Michael Morey, also a writer and bricoleur, jack of all trades, who keeps things going.

4 thoughts on “Memory and Invention: A Guest Post by Barbara L. Baer, Author of The Last Devadasi”