Published by Faber and Faber on 1st November 2018, The Long Shadow is available for purchase directly from the publisher as well as here.

Jolted from sleep by the ringing of the telephone, Imogen stumbles through the dark, empty house to answer it. At first, she can’t quite understand the man on the other end of the line. Surely he can’t honestly be accusing her of killing her husband, Ivor, who died in a car crash barely two months ago.

An Extract from The Long Shadow by Celia Fremlin

No, he died two months ago,’ she said; ‘I’m a widow,’ and she waited for the tiny recoil behind his eyes, the twitch of unease, as he adjusted himself to the embar­rassment of it. What do you say to middle-aged widows who turn up at parties so indecently soon? What do you talk to them about? Is the weather a safe topic? Or the state of the country?

I don’t know either, Imogen wanted to scream at him. I don’t know what you’re supposed to say to me, or what I’m supposed to answer—or anything. This is the first time I’ve been anywhere since Ivor died, and I wish I’d never come, I wish I was safe at home being miserable. What a fool I was to let Myrtle persuade me, I might have known it would be like this . . . .

Myrtle wasn’t really to blame, of course. Her intentions had been of the kindliest.

‘It’ll take you out of yourself, darling,’ she’d insisted. ‘After all, Ivor wouldn’t have wanted you to go on grieving for ever . . . .’

Like hell he wouldn’t! To Ivor’s vast, irrepressible ego, for ever would have been all too short a tribute. He’d have loved to imagine that Imogen would grieve for him for ever, miss him for ever—indeed, that everyone else would, too: pupils, colleagues,neighbours; even his former wives and mistresses. All of them, all tearing their hair, rending their garments, flinging themselves on his pyre in an abandonment of grief. That’s what Ivor would have liked, and Myrtle, of all people, must know it.

But of course, you couldn’t expect her to mention it, any more than Imogen herself was mentioning it: and so, ‘No, I suppose he wouldn’t,’ she’d lied, and had begun worrying about what to wear.

After all, it might be fun. It might, for a few hours, make her feel like a whole person again instead of the broken half of a couple.

It didn’t, though; and it wasn’t fun. By now, after nearly two hours of it, she felt not merely like a half person, but a half person who has been bisected vertically for an anatomical demonstration . . . all the raw, bleeding ends on display as the audience files past, each in turn peering with fascinated horror.

Over the rim of her glass, Imogen stole a look at her compan­ion. Short, bearded, ten years younger than herself (as most men seemed to be these days)—already she could see the ‘Let-me-out-of-this’ signals flashing behind his horn-rimmed glasses. Any minute now. Myrtle (attentive hostess that she was) would be undulating along, all smiles, to mount yet another rescue operation. The fourth.

Embarrassment. Looking back over these past awful weeks, Imogen sometimes felt that the embarrassment had been worse than the grief: and there was no outlet for it in tears.

The hushed voices. The laughter that died as you drew near. The careful topics of conversation, picked clean of all reference to husbands, funerals, car accidents, professorships, love, happiness, unhappiness, men, women, life . . . . It didn’t leave much.

(What a taster! I’m so pleased I have The Long Shadow on my TBR!)

Celia Fremlin (1914-2009) was born in Kent and educated at Berkhamsted School for Girls and Somerville College, Oxford, where she read classics and philosophy. During the Second World War she worked for the Mass Observation project, an experience that resulted in her first published book, War Factory (1943, available in Faber Finds), which recorded the experiences and attitudes of women war workers in a radar equipment factory outside Malmesbury, Wiltshire. Her first published novel of suspense was The Hours Before Dawn (1958), which went on to win the Mystery Writers of America’s Edgar Allan Poe award for best crime novel in 1960. Over the next 35 years Fremlin published a further eighteen titles, including three collections of stories. 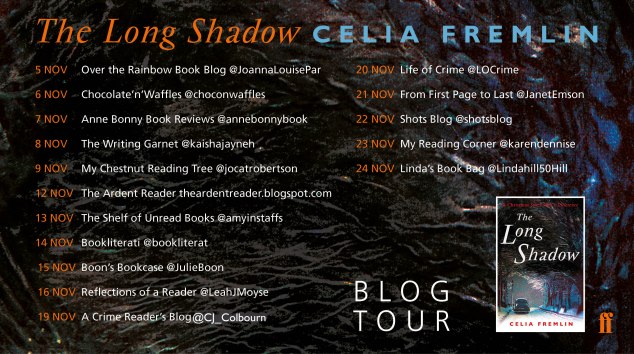