I’m at it again here on Linda’s Book Bag – discovering another new to me author! This time I have great pleasure in welcoming Sebastiano Lanza to stay in with me and tell me about one of his books.

Staying in with Sebastiano Lanza

Welcome to Linda’s Book Bag Sebastiano. Thanks so much for agreeing to stay in with me.

Hi Linda, thank you for having me.

Tonight I have brought That Which Must Happen, my first full-length novel!
That Which Must Happen is a novel about fate, not the “inexorable” fate we’re all acquainted with, rather, a series of interconnected events all influenced by each other and, ultimately, by our choices. In other words, an active fate.

It is also Benjamin’s story. He’s a child able to foresee, forestall, and alter events happening all around him. But does he do that of his own accord? Well, I’m not going to say!

However, at some point during the novel, his personal attachments do get in the way, as the only person he truly cares about is faced with a less than ideal fate. Since every event is connected to another and so on, he cannot simply save her, that would make the whole novel rather dull, wouldn’t it?

(It would – but you have me intrigued as to what happens in That Which Must Happen.)

That Which Must Happen is definitely not a light read. There are these terrible events happening throughout the whole novel. It is an attempt at studying what makes fate tick. By which criteria do some events happen whilst others just don’t? Consequently it is also a study of human nature. How do we react in the face of adversities? How should we react to adversities?

(That Which Must Happen sounds quite philosophical.)

Despite having these terrible events plaguing Benjamin’s life and those of the people around him, I think readers, once having read the whole novel, will turn the last page in a feel-good mood.

Please, allow me to share a short excerpt from chapter VI of That Which Must Happen:

The setting sun’s sparse beams, purposefully shining through the opaque, stained windows, allowed their dim orange glow to render discernible to cursory glances the considerable amount of dust languishing upon the deep-black grand piano lid. Similarly to the dust, a relative amount of undisturbed peace had settled throughout Ms Penter’s residence.

Vainly attempting to rest her wary mind, Ms Penter had closed her weary eyes; an arduous task rendered impossible by her thoughts, rushing untamed through every possible scenario which could have led to the child’s indescribable pain. She was seated on one of the living room chairs she had previously brought upstairs, to the bedroom. To her right, upon the night table, were: a bottle of fresh water, droplets of condensation obfuscated its transparent body; a richly decorated glass covered in its entirety by green dots; a ceramic plate containing two eggs, which Ms Penter had fried during the previous, apprehension-filled, hours, and a round, blue tin-box entirely filled with Danish cookies.

Ms Penter had awaited the child’s awakening for the entire day. She did not desire for him to wake in a barren environment and, although exhausted, she knew herself all too well; she would not be able to fall asleep, nor find a relative composure of mind and thought, given the dire circumstances she had found herself entangled in.
Unexpected, the rustling sound of moving sheets forcefully compelled the woman to open her exhausted eyes, thus call to attention her wandering mind. What her eyes perceived filled her with an indescribable sense of relief.

Awake at last, the child had sat comfortably atop the pillow, his wide nut-brown eyes, rendered ever more so by his scrawny appearance, were attentively cemented upon the simple and colourful wardrobe; his breathing was regular, his expression somewhat peaceful.

Uncertain, Ms Penter cautiously placed her right hand upon the colourless duvet, only to lean closer towards the child.

“Hi,” she whispered softly, her tone of voice gentle.

Following the woman’s tender greeting, the child’s wide eyes swiftly moved away from the wardrobe’s colourful contours. Startled, once his gaze had met the woman’s graceful silhouette, he abruptly jumped back, against the sturdy bed frame. His nut-brown eyes, moments prior wide, were now shut and sheltered by his scrawny hands; the expression upon his partially concealed visage was one of unbearable pain.

Subsequently to the child’s frightful reaction, Ms Penter’s keen relief steadily faded to dreaded concern. Cautiously, the woman sat upon the duvet as gently as she could, so as to avoid to generate further alarm within his already apprehensive mind.

“Hi,” she softly whispered anew, her tone of voice as calm as she could muster. “You are safe now. I am not going to hurt you,” she continued as she extended her hand towards the young boy, only to halt her movement moments before touching his scrawny, pale forearm.

A few moments of silence went by unnoticed.

The expression of keenly sensed pain, which had previously marked the child’s visage, had become less prominent. Partially reassured by the woman’s calm, collected demeanour and soothing whispers, the child hesitantly moved his pale hands away from his sealed eyes, only to intently seek her hand; his own hand uncertain, his arm’s movements fearful.

At last, the child seized the woman’s hand, his hold growing ever so tight with every unmerciful, passing instant; he allowed himself to release without constraint past nights’, days’, months’ terror through his feeble touch.

His wary eyes, disquieted and finally wide open, met Ms Penter’s disconcerted gaze. The child scrutinized the woman’s eyes, as if in search of something nor he or she could accurately describe, at last exploding in inexhaustible tears.

Promptly, Ms Penter embraced him, his arms now interlocked behind the woman’s back.
“You will be alright,” the woman soothingly whispered in his ear, a note of uncontrolled emotion well discernible in her trembling voice. She sensed through that first, momentous embrace, which she did not allow herself to break until the child’s desperate tears became completely exhausted, that the young boy had shared with her the entirety of his intolerable pain.

Receding sunlight had completely vanished from serene skies. Droplets of water, once again hitting the intricately ornamented ceramic sink, dictated the tempo of unfathomable events unfolding in their silence-filled surroundings.

(Oh! This has really made me want to read on Seb.)

What else did you bring and why?

-Oh, I nearly forgot. I did bring along some cookies. We call these Rame di Napoli. It’s a chocolate marzipan-like cookie filled with either marmalade, nutella, pistacchio creme or anything else really. They’re exquisite.

They certainly look it! Thanks for bringing them and for staying in to tell me all about That Which Must Happen. I’ve been intrigued by your book!

That Which Must Happen 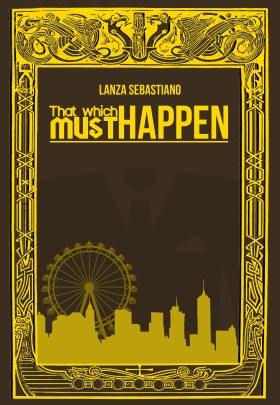 Benjamin is a child able to foresee and forestall events unfolding in his life and that of others. Yet he dreads to reshape them, for these events intertwine each and every existence in a delicate balance. However, when he senses his sole caretaker’s imminent death, he feels he must intervene.

In a fevered state, Benjamin was abandoned in the midst of a winter night, and is now sheltered by Ms Penter, a woman grieving over the loss of her own child. As he’s nurtured back to health, and his presence helps the woman to partially let go of her grief, Benjamin is devastated each and every time he glimpses her imminent demise.

Despite his attempts to alter the events leading to her death, Benjamin knows he won’t be able to save Ms Penter without damaging the delicate balance which entwines each and every life. The same balance he was born to preserve.

That Which Must Happen tackles the theme of fate.
Not to be understood as a series of immutable events leading to a predetermined destination, rather, as a series of interconnected events which can be influenced by our choices.

That Which Must Happen is available for purchase from your local Amazon site. 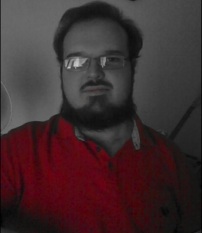 Sebastiano was born and bred in Italy, which must be why he loves good food, and is the author of That Which Must Happen. Currently working on more novels, Sebastiano is passionate about non-linear storytelling, labyrinthine plots, and mise en abyme (amidst others), which feature heavily in his works.

Sebastiano takes great pleasure from thinking for hours on end about what’s rather important.
He also adores impossible challenges, if nothing else for their paradoxical nature. Sebastiano believes nothing is impossible.