My enormous thanks to Alainna at Orion for inviting me to be part of the launch celebrations for The Insider by Mari Hannah and for sending me a copy of the book in return for an honest review.

The Insider was published by Orion on 1st November 2018 and is available for purchase through the links here. 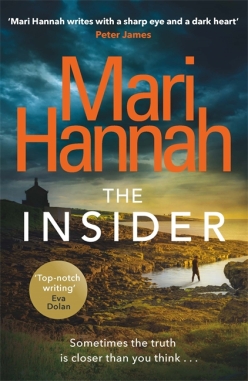 ‘It was the news they had all been dreading, confirmation of a fourth victim.’

When the body of a young woman is found by a Northumberland railway line, it’s a baptism of fire for the Murder Investigation Team’s newest detective duo: DCI David Stone and DS Frankie Oliver.

The case is tough by anyone’s standards, but Stone is convinced that there’s a leak in his team – someone is giving the killer a head start on the investigation. Until he finds out who, Stone can only trust his partner.

But Frankie is struggling with her own past. And she isn’t the only one being driven by a personal vendetta. The killer is targeting these women for a reason. And his next target is close to home…

My Review of The Insider

Another murder will challenge Frankie and David to the limit.

If I’m honest, I’m not usually a great lover of police procedural novels and I think it says something about Mari Hannah’s writing that I really thoroughly enjoyed The Insider. This is the second book in the Stone and Oliver series and I haven’t read the first, The Lost, but it made no difference to my enjoyment at all. The backstories for David and Frankie are carefully and skilfully woven into this new narrative so that I felt I understood them completely, but I still have more to uncover in the next book.

Indeed, there’s a real depth to the characters in The Insider, and to Frankie and David especially which I actually enjoyed more than the well written and entertaining plot. I thoroughly appreciated the way in which Mari Hannah illustrates what they are like as real people and not just as police officers. She made me care about them and I now want to read more about them. There’s a sensitivity to how Mari Hannah shows the impact of crime not just on the victims, but on their families and those investigating them.

The plot that gradually uncovers more about Frankie and David has a good pace and is very well supported by an authoritative presentation of police procedure and acronyms so that it has a real feeling of authenticity. Mari Hannah explains them where she needs to and I felt quite educated as well as entertained. I really enjoyed the way the fits and starts of uncovering the murderer were portrayed as it felt as if I were part of the investigative team so that I understood the frustrations completely.

I thought the Northumberland setting was hugely accurate and evocative. Reading The Insider made me feel that this would translate brilliantly to a television drama because the writing is quite cinematic at times.

I thought The Insider was a very entertaining and enjoyable read. It has made me feel that I am missing out on not reading more of this genre and I look forward to finding out what happens next for Frankie and David.

Mari Hannah is a multi-award-winning author whose authentic voice is no happy accident. A former probation officer, she lives in rural Northumberland with her partner, an ex-murder detective. Mari turned to script-writing when her career was cut short following an assault on duty. Her debut, The Murder Wall (adapted from a script she developed with the BBC) won her the Polari First Book Prize. Its follow-up, Settled Blood, picked up a Northern Writers’ Award. Her Kate Daniels series is in development with Stephen Fry’s production company, Sprout Pictures. She is currently Reader in Residence for Harrogate International Crime Writing Festival. Mari’s body of work won her the CWA Dagger in the Library 2017, an incredible honour to receive so early on in her career.

8 thoughts on “The Insider by Mari Hannah”