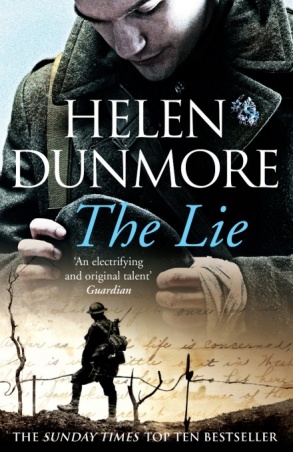 As a change from new books and those languishing on my TBR I’m delighted to have actually read my U3A book group choice again this month! This time it’s The Lie by Helen Dunmore.

The Lie was published by Windmill, a Penguin imprint, in May 2014 and is available for purchase through the publisher links here.

Set during and just after the First World War, The Lie is an enthralling, heart-wrenching novel of love, memory and devastating loss by one of the UK’s most acclaimed storytellers.

A young man stands on a headland, looking out to sea. He is back from the war, homeless and without family.

Behind him lie the mud, barbed-wire entanglements and terror of the trenches. Behind him is also the most intense relationship of his life.

Daniel has survived, but the horror and passion of the past seem more real than the quiet fields around him.

He is about to step into the unknown. But will he ever be able to escape the terrible, unforeseen consequences of a lie?

My Review of The Lie

Daniel is back in Cornwall after the First World War but its consequences still resonate in his life.

The Lie is a glorious book. It is exquisite storytelling at its best because the reader is compelled to live every moment with Daniel as a result of the fabulous and almost ethereal prose. Helen Dunmore is not afraid to present the realities of the stench of death and decay, or the beauty of a bunch of violets, for example, so that reading The Lie becomes a truly immersive experience. The author’s use of language is poetic at times and always perfectly attuned to the needs of the narrative. Not a syllable is out of place or wasted. I found Helen Dunmore’s appeal to the senses so vivid and astute that I felt Daniel’s experiences with him and felt I was staring into his very soul as he struggled to come to terms with his perceived guilt.

The plot is wonderful, hinging on one spoken lie early on but encompassing so many more, from the oblique and generic letters sent to those whose loved ones had died in the conflict to the difficulty in accepting the sensuality between Dan and Frederick. Self-deception, identity and love and a desire to do the right thing are all wrapped within untruths, near or half truths making for a mesmerising read.

The Lie rings with all kinds of emotion just under the surface, from passion to hatred, so that I found it a very intense and beautiful book. The way in which Dan’s experiences come back to haunt him, quite literally, made me intensely sad and moved me considerably.

On the surface, the plot of The Lie is actually relatively simple, but this is no ordinary book and I feel reading it once has only allowed me to skim the surface of its nuances. I loved the balance between the army training aspects at the beginning of chapters and how they reflected the events within those chapters. Dan’s mental state writhes through the more prosaic elements so that reading The Lie feels all the more effective and affecting.

I really loved The Lie. I cannot believe it is my first Helen Dunmore book and I feel the world has lost a writer of the utmost skill and talent in her early death. I thought The Lie was wonderful.

Helen Dunmore was an award-winning novelist, children’s author and poet who will be remembered for the depth and breadth of her fiction. Rich and intricate, yet narrated with a deceptive simplicity that made all of her work accessible and heartfelt, her writing stood out for the fluidity and lyricism of her prose, and her extraordinary ability to capture the presence of the past.

Her first novel, Zennor in Darkness, explored the events which led D. H. Lawrence to be expelled from Cornwall on suspicion of spying, and won the McKitterick Prize. Her third novel, A Spell of Winter, won the inaugural Orange Prize for Fiction in 1996, and she went on to become a Sunday Times bestseller with The Siege, which was described by Antony Beevor as a ‘world-class novel’ and was shortlisted for the Whitbread Novel of the Year and the Orange Prize. Published in 2010, her eleventh novel, The Betrayal, was longlisted for the Man Booker Prize and shortlisted for the Orwell Prize and the Commonwealth Writers Prize, and The Lie in 2014 was shortlisted for the Walter Scott Prize for Historical Fiction and the 2015 RSL Ondaatje Prize.

Her final novel, Birdcage Walk, deals with legacy and recognition – what writers, especially women writers, can expect to leave behind them – and was described by the Observer as ‘the finest novel Helen Dunmore has written’.

Helen was known to be an inspirational and generous author, championing emerging voices and other established authors. She also gave a large amount of her time to supporting literature, independent bookshops all over the UK, and arts organisations across the world. She died in June 2017.

14 thoughts on “The Lie by Helen Dunmore”