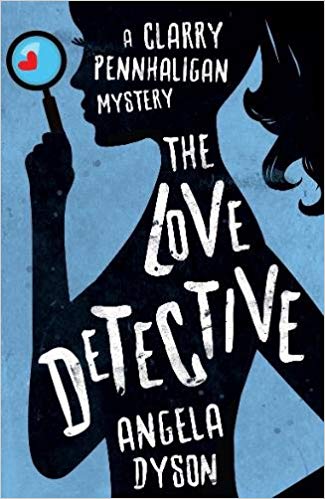 My enormous thanks to Helen Lewis for inviting me to be part of the launch celebrations for The Love Detective by Angela Dyson. I’m thrilled to be able to share an extract with you today.

The first in a hilarious new series featuring a regular girl set down a path strewn with misadventures and murder to her destiny as `The Love Detective’.

Clarry is 26, attractive, funny – and on the road to nowhere. Living a makeshift existence as a waitress, she knows life should be led with some sort of plan, but unfortunately planning is something she needs to get around to.

Enter her best friend Laura with a seemingly simple request: check out Simon, estate agent and new boyfriend, to make sure he really is interested in Laura and not the solicitor help she can provide. Clarry is no detective, unless you count tracking down where her next tip is coming from. Still, what harm could a little amateur sleuthing do?

With the aid of Flan, a glamorous septuagenarian, Flan’s lover, and a cast of colourful characters from the restaurant she works at, Clarry plunges into the investigation with a few pitfalls, pratfalls and a dodgy moment where she’s mistaken as a pole dancer (and not in a good way). It isn’t until 1) she discovers that Simon’s a two-timing creep, and 2) in a sinister turn, she uncovers an evil criminal enterprise, that she realises amateur sleuthing is not for the faint of heart!

Cynical and yet romantic, Clarry is an unlikely heroine that readers will both identify and fall in love with. Her misadventures and comical outlook mesh brilliantly with a thrilling story that will appeal to readers of romance, crime and chick lit. Set to be the first in an entertaining new series, you don’t need to follow the clues to know The Love Detective is one book you don’t want to miss out on!

An Extract from the Love Detective

And then, without indicating, the van suddenly swung a left disappearing around a corner. In pursuit, I picked up speed and swerved after it, only to find that it had come to a halt right on the bend. Urgently, I pressed down hard on the brake pedal but it was too late, I was going to ram straight into it. Forcing myself back into my seat as if somehow, magically, the movement of my body could prevent collision with the rear of the other vehicle, I ground my foot down again and pulled desperately at the handbrake. The wheels spun for what seemed a very long minute but in reality could only have been a few seconds. My old Renault rocked violently on its axis but I had missed hitting the van, and with only inches to spare.

I took a long, ragged breath. Nausea threatened and briefly I closed my eyes trying to force it down. Instantly, I opened them again at the sound of the van door being opened. The driver was getting out. I could see now that his bomber jacket was of shiny leather and that he was in his thirties with black receding hair, I registered, in my rear-view mirror, something small and white that floated out and down from the van’s nearside window, to land amongst the scrubby grass that lined the edge of the kerb. Somebody in that van had thrown out a piece of paper.

(And now I need to know what happens next!)

Angela Dyson ditched her London life and downsized her home to move to the sticks in Surrey, to follow her dream to become a professional author. She loves to write but to pay the bills (Angela soon discovered that utility companies, bank managers and landlords aren’t known for their generosity and understanding natures,) she had to squeeze the writing in with working for a living. Some of the jobs to which she only gave half her attention have included working for a recording studio and a record label, running a building maintenance company where pretty much the only upside was getting to boss a lot of men about all day, doing a bit of plus size modelling (strictly clothes on) and, for one memorable summer, making a living reading palms on a Greek Island.