Usually when I spend an evening in with authors here on Linda’s Book Bag I ‘host’ them in my Lincolnshire home that is about as far from the sea as you can get. Today, however, I’m off to the seaside with Cesario Pica as he tells me about one of his books.

Staying in with Cesario Pica

Welcome to Linda’s Book Bag, Cesario. Thank you for agreeing to stay in with me.

Tell me, which of your books are you sharing this evening and why have you chosen it?

Hi Linda. First of all thank you very much for inviting me to stay in with you in this fantastic location on the seaside. You must know I was born and bred in a place where the seaside and the countryside were neighbors. So, staying here with the smell and the sound of the sea is for me a sort of madeleine cake as Proust wrote in his In search of the lost time… Also, the context could inspire love, although I’ve not brought a romance, but my thriller Broken Lives. I’ve written five thrillers but only two in English: Broken Lives and Murder in the Tremiti Isles (about a femicide). 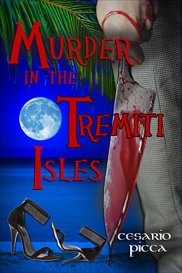 What can we expect from an evening in with Broken Lives?

Broken Lives is a psychological thriller set in London, dedicated to victims of abuse and inspired by TV series Criminal Minds. A person abused in his childhood can become an abuser or, worse, a serial killer. The main characters are the Scotland Yard’s detective Sonny D’Amato, the coroner July Pence and the Italian reporter Rosario Saru Santacroce. Sonny D’Amato must stop the serial killer before he kills the fourth person.

(Sounds exciting stuff. I sometimes think truth is stranger than fiction so it would be interesting to read Broken Lives and see how you’ve brought the two together.)

We’re talking about a thriller in this beautiful place without shadows or witches but with mental monsters who kill the soul. So, we need something good to face this argument. And I think, and I’m certain I’m not alone, that with a good book you need a good wine. So, what’s better than a bottle of fresh prosecco? I like it too much. I know, it’s not champagne but as I said before I come from countryside, so I love simple things like wine, cheese, salami, bruschetta and meatballs.

(I agree. Simple foods are sometimes the best and I’m very partial to a glass or two of prosecco.)

You must know that the bread, the olive oil and the prosecco are self produced. Then, after having eaten, we will run to avoid terrifying effects of the book…

(That looks delicious. I’m not sure I’ll be able to run after all that food and prosecco though!)

The monsters from the past destroy the future…

A monster from the past reemerges in the present destroying the life of three young students and engaging in a fight against time with the promising Scotland Yard detective, Sonny D’Amato, in charge of solving the difficult case.

The suffering of someone who as a child doesn’t know about love but suffers only abuse can turn into the worst nightmare when it triggers that dangerous stress factor that makes anger push a person to cross the hellish threshold of no return.

Thanks to the precious help of the coroner July Pence, the detective digs in the past in search of the logical thread that will allow him to solve the intricate enigma. He will most likely get the promotion that he feels he deserves, but without being able to rejoice. In fact, his soul will be hostage to the pain emanating from this sad inquiry that will make him lose sight of the difference between the victim and the executioner. Because, as Alexandr Solzhenitsyn wrote, “the line dividing good and evil cuts through the heart of every human being”.

Set in London, Broken lives, the new thriller by Cesario Picca, sees once again the reporter from Salento Rosario Saru Santacroce looking for news to inform the readers about these crimes which are worrying a city already wracked by terrorist attacks.

Cesario Picca, was born and bred in Salento (South Italy seaside) thanks to his parents Francesco and Antonia. For 25 years he worked as a crime and judicial reporter so it was a very simple move to starting write thrillers. In his books, like Broken Lives and Murder in the Tremiti Isles, there are many real stories crossed with fantasy.

The main character of his thrillers is a rough and rational man, talkative, charismatic, ready to savor every moment of life as if it was the last. Nicknamed Saru (the nickname that is given in Salento to those named like him), the reporter Rosario Santacroce covers the city’s crime beat. As often happens, occasionally work also follows him on holidays because a real reporter is destined (almost) never to unplug. And that is probably why he gets entangled in murders.

Maybe, between Saru Santacroce and Cesario Picca there are many points in common; they love life and they think life is a gift, so they have to taste this present even if sometimes it can be difficult. They both love running and until now they have run 20 marathons. A good way, in their opinion, to relax and feel good, especially after having enjoyed eating.

In 2002 Cesario Picca was awarded the Piero Passetti prize for Chronicler of the year. He’s a speaker or moderator at numerous conferences and participates in many radio and television broadcasts.

One thought on “Staying in with Cesario Picca”