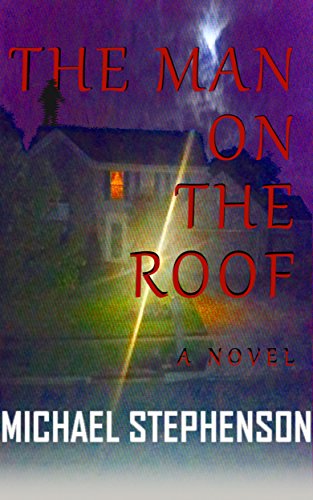 I’d like to thank Michael Stephenson for asking me to be part of the launch celebrations for The Man on the Roof. I’m very pleased to welcome Michael to Linda’s Book Bag today. Michael has kindly agreed to spend an evening with me chatting about this new release.

Staying in with Michael Stephenson

Welcome to Linda’s Book Bag, Michael. Thank you for agreeing to stay in with me.

The pleasure is all mine, Linda. I should thank you for letting me stay in with you.

Tonight I have chosen my new novel The Man On The Roof. It’s only the second full-fledged mystery thriller that I’ve written, but I’m quite proud to bring it to you. I chose to stay in with this book because I’m currently on a huge psychological-thriller binge. This novel shares the same shelf with Gone Girl, The Girl on the Train, The Woman in the Window and The Girl with the Dragon Tattoo. Who doesn’t sometimes like a dark, twisty, up-all-night read that’ll make you chuckle once or twice and deeply think about important issues?

(Who indeed? I love a psychological thriller!)

What can we expect from an evening in with The Man On The Roof?

This is going to sound cliché, but expect the unexpected… as well as the totally expected. We think a lot of things in this world: that what doesn’t kill you makes you stronger, that love can conquer all, that most people are inherently good, that we’ve read it all when it comes to recent psychological thrillers, that we know our neighbors and that they’re decent people. But what if we’re wrong about all of it? What if we haven’t read every twist? What if our neighbors really aren’t that decent? What if…

(Oo-er – we’ve just got new neighbours – the ones just across the road. What if…)

Most of all, I think The Man On The Roof is one of few mystery novels that is even better when re-read, even after the mystery is solved.

(That’s very interesting. I sometimes like to reread a book when I know the outcome to see if I can spot the clues along the way better the second time around.)

I’ve brought an eclectic mix of food and music. I bought some of the best smoked BBQ ribs—last of the summer season. Their hickory taste and buttery pork are melting in my mouth.

Finally, I brought a platter of cheese, croissants and wine, because I don’t know a single person who doesn’t.

That sounds like my kind of food Michael. Thanks so much for staying in with me to tell me all about The Man on the Roof. I’ve enjoyed our evening.

The Man on the Roof

Someone has been creeping in the dark while the others sleep, and they’ve done terrible, terrible things.

“There was a man on your roof,” claims curmudgeonly lane-hermit Herbert McKinney. Then, he initiates an unprovoked fight with a local punk. Drama escalates when that punk’s dead body is found hanging at mid-street one August morning—a boastful killer messaging their next prey. All fingers point to Herbert as the culprit. Soon, the five couples he calls neighbors come under suspicion, too. When lead detective Cady Lambert divines blackmail as the motive, eyes cross to find who hides the most shameful secret. Husband versus wife, friend versus friend, the shiny suburban veneer of innocence has been forever tarnished. As hidden deviousness boils from their pores, there lurks a thief, a pill addict and a sadist—secrets worth killing for.

Now, as the man on the roof helps guide justice and watches devious neighbors slip in and out of sleepy houses, confusion and questions persist. Who dies next? What have they learned? Who is becoming a monster? Who already is one? And just how many secrets can a small group of multi-ethnic Ohioans have? Only one cemented truth exists: the killer will kill again.

A tension-building psychological mystery-suspense thriller, The Man On The Roof propels the reader through a tangled, volatile and suspenseful thicket of deception, murder and friends, inviting the reader to discover the murderer and who hides which lie.

The Man on the Roof is available for purchase here.

An American-born, American-raised author, Michael enjoys writing in every genre and for every medium. Covering a wide range of subjects, ethnicities, socio-economic classes, and ideals, his writing runs the gambit from silly and light-hearted to thought-provoking and sensual to horrifying and captivating. Offering everything from sci-fi to romance, he wishes to supply the reader with an indelible experience.

Having grown up in the Midwest of the United States, he has travelled and lived in towns throughout the USA and enjoys learning of other cultures whenever he can. A lover of story, he believes a great story makes for great writing. He believes that great writers aren’t necessarily made by their words, but by the words their readers write about them.

Privately, he seeks to accomplish great things with his writing in both popular culture as well as more niche genres. He hopes to one day again write for film, and aspires to write the screenplay for the film adaptation of Captain Planet.

2 thoughts on “Staying in with Michael Stephenson”