As my TBR pile is always huge and I frequently don’t get to finish the book for my reading group I have actually read The Enchanted April by Elizabeth von Arnim two weeks early!

Originally published in 1922, my edition of The Enchanted April was published by Penguin Classic in 2012 and is available for purchase through these links. 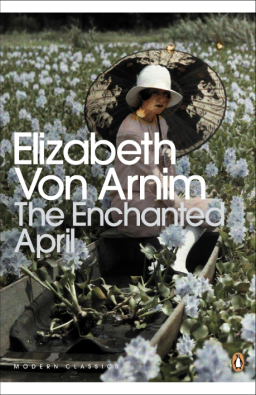 The discreet advertisement in The Times, addressed ‘To Those who Appreciate Wistaria and Sunshine’, offers a small medieval castle for rent, above a bay on the Italian Riviera. Four very different women – the dishevelled and downtrodden Mrs Wilkins, the sad, sweet-faced Mrs Arbuthnot, the formidable widow Mrs Fisher and the ravishing socialite Lady Caroline Dester – are drawn to the shores of the Mediterranean that April. As each, in turn, blossoms in the warmth of the Italian spring and finds their spirits stirring, quite unexpected changes occur.

My Review of The Enchanted April

An advertisement in The Times will change the lives of those who respond for ever.

I really enjoyed The Enchanted April. I must admit that it took a chapter or so to attune my modern reader’s eye to the style of a book written almost 100 years ago, but once I did I found it a hugely entertaining read. The underlying sarcasm and humour had me snorting aloud at times. I especially enjoyed the contrast between what each of the four ladies said and what they privately thought. The book is actually very funny and I even found myself reading bits aloud to my husband so that he could enjoy it too.

The Enchanted April is a fascinating insight into the society of between the wars English gentry at all levels. I found the depiction of social mores and snobbery well depicted so that I understood the reasons why each character behaved as they did completely.

Underlying the satirical approach, however, are some themes that are still only too familiar in today’s society. Lady Caroline’s self-worth being measured by men’s attention to her physical beauty, the way in which she abhors their attempts to grasp and pat her, Rose and Lotty’s sad marriages and the emotional isolation that all four women feel in spite of their desire for solitude and time for reflection are concepts many modern readers will appreciate and many will identify with.

But The Enchanted April does not have such a title without reason. The sojourn in Italy will  break down many barriers so that this becomes a very uplifting read as well as an entertaining one. There is enchantment in the setting that is so skilfully conveyed partly through Mrs Wilkins’ ‘seeing’ and partly through the luxurious descriptions that appeal to all the senses from the taste of the food to the scent of the flowers and the sight of the sea. There is magic in the air and it has an almost Shakespearean effect making me think of A Midsummer Night’s Dream.

The Enchanted April will not suit all readers – and especially those looking for pacy plotting and rapid, heart racing excitement. But for those wanting an insight into another era, or wanting to follow four women’s self-discovery and burgeoning independence and love it will appeal completely. I really enjoyed it.

Cousin of Katherine Mansfield and lover of H.G. Wells, Elizabeth von Arnim was at the hub of the literary and political society of her time.

She was born in Australia in 1866 but grew up in England, and began her career in 1898 with the semi-autobiographical Elizabeth and Her German Garden. She was married twice and died in 1941.

15 thoughts on “The Enchanted April by Elizabeth von Arnim”