I’m so pleased to welcome F J Campbell to Linda’s Book Bag to stay in with me today. F J is taking me off on my travels again and I can’t wait.

Staying in with F J Campbell

I’ve brought along my debut novel, No Number Nine. It’s recently published (April 2018) and the reviews are positive so far. I think it’s a wonderfully uplifting book, with a bit of heartbreak and first love and lots of brilliant characters. I had an enormous amount of fun writing it and I think that comes across when you read it. It’s a great book to read on the beach on your summer holiday, or on the train on the way to work, or curled up on the sofa in the evening.

(This sounds smashing. I think No Number Nine could be off on its holidays with many readers!)

What can we expect from an evening in with No Number Nine?

No Number Nine is a coming-of-age story for adults. I love coming-of-age novels – it was such an exciting time, when you leave home and your parents and start to have adventures of your own. The main character in the book, Pip Mitchell, is English, 18 years old, and has suffered from a family tragedy that has meant she’s retreated away from the world. The start of the book sees her try and begin her life again. She’s a very brave character, and although she makes some really silly mistakes (as we all do), I think readers will take her to their hearts.

(You’re right. We all make mistakes!)

This is the first paragraph of the book:

Philippa Mitchell was eighteen years old when she left England. She left behind her bedroom, that cocoon of misery in which she’d imprisoned herself; her parents, with their forced, hollow cheerfulness; and the pieces of her heart, smashed to smithereens two years ago with a phone call that came in the middle of the night.

(Hum! Now, of course, I want to know more about what happened both in the past and from now on for Philippa!)

“Twists and turns to the plot, compelling characters, interesting setting, all mixed together with a healthy dose of nostalgia for a misspent youth.”

“The characters are developed wonderfully and you live every moment with Pip. The book is easy to read with some proper belly laughs.”

(These really entice me to read No Number Nine. I think it sounds a super book.)

I’ve brought along some German beer and sausage because the first part of the book is set in Munich. I lived in Munich for many years and the suburb where Pip lives and works – Solln – was where my house was (but not quite as glamorous as the house in the book!). Along my street, near to the station, was a lovely independent book shop, called Bucher Krugg, which was the nicest place in the world to buy books from.

(How wonderful to be so close to a bookshop.)

I’ve also brought lots of memories of being at the Sydney Olympic Games in 2000, as the second part of the book is set at these Olympics. In No Number Nine, some pretty awful things happen and generally Pip doesn’t have a good time there – but this was no at all the case for me! It was one of the best holidays of my life and I love the city and its people.

(I agree. I love Sydney. It’s a brilliant city. You’ve rekindled some of my memories too.)

People often ask if No Number Nine is autobiographical and that’s a good question but a difficult one to answer. There are a few experiences that I’ve lifted from my life – for example, I was an au pair and I was fired (that’s a different story, though, for another day) – but much of No Number Nine is straight out of my imagination. Thank goodness – however much I love Pip, I wouldn’t want to be her and go through what she’s been through. My life is much more mundane than hers and I like it that way!

Thanks so much for staying in with me, F J, and telling me about No Number Nine. I really want to meet Pip now and shall have to buy the book!

What do you do when your amazing, beloved sister dies?

Hide in your room for two years.
Sleep with a very, very wrong man.
Leave home and start a new life, lying to everyone you meet including your kind employer, your curious friends and the man you love?

Pip Mitchell’s an expert at making seriously bad decisions. But when her past, present and future collide at the Sydney Olympic Games, she’s going to have to decide whose side she’s on – or she’ll lose everyone she loves.

No Number Nine is available for purchase through these links. 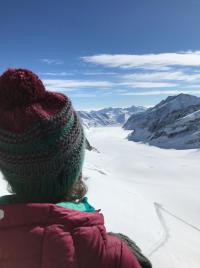 FJ Campbell was born in the twentieth century in a seaside town and has moved around a lot, in Britain and Europe. FJ loves reading and sport (but not at the same time) and has visited three Olympic Games including Sydney 2000 (as a fan).

You can find out more about F J Campbell on her website, by following her on Twitter @fj_campbell.

One thought on “Staying in with F J Campbell”