With reading time at a premium in our lives, collections of short stories are becoming so important because we can have the satisfaction of reading a complete work in a relatively short space of time. I’m delighted, therefore, to welcome Yannis Kyrlis to Linda’s Book Bag today to tell me more about his latest collection.

Staying in with Yannis Kyrlis

Welcome to Linda’s Book Bag, Yannis. Thank you for agreeing to stay in with me.

The pleasure is mine Linda.

Tell me, which of your books have you brought along to share this evening?

I’ve brought my book The Quest – A Collection Of Short Stories.

What can we expect from an evening in with The Quest – A Collection Of Short Stories?

It is a dream-tinged collection of twelve short stories, which focus on the abstract and the hazy difference between dreams and reality. The book covers a wide range of situations and feelings, from lack of awareness and conscience, to despair, guilt and remorse, from a child’s innocence to the lοss of responsibility of the individual and the crowd psychology, since in many cases it leads to disasters (this is the subject of the short story The Course Of A Crisis). The hero of the short story The Quest, is in pursuit of his internal integration and self-knowledge after “he has lost his heart”. In The Little Girl With Cloth Legs, the path towards the hero’s inner freedom passes through the restoration of harmony and balance between the masculine and feminine sides. The little girl with cloth legs symbolises the hero’s undeveloped feminine energy (compassion, understanding, empathy…)

My intention has been to bring to the surface the inner scriptwriter existing within all of us, whose voice we often ignore, but who always has something to tell us. I wish to have achieved it to some degree…

It was early afternoon and I was bent over a torrent of refuse looking for my heart. I was stirring the dirty water with a wooden stick, yearning for the moment it would appear. Some days ago, an acquaintance of mine informed me that he had seen it floating among all kinds of garbage. “It’s impossible! My own heart?” I said aloud, mostly to myself. Then my acquaintance pointed out how puzzled the passers-by, who had noticed my heart, were. In fact, an illustrator, who happened to pass by at that time, wanted to draw a picture of this spectacle in order to immortalise the scene.

And although your heart could fit in a handful, he drew it much bigger. I asked the illustrator why. He told me that I was mistaken, that it had its real dimensions and that the extra I was seeing were the heartbeats. “Well, is it alive?” I asked the illustrator, puzzled. “But, of course. Can’t you see it beating?” he answered. Then I considered grabbing it and bringing it to you, but I didn’t do it because I wondered, what would people say? I was afraid they would take me for a scavenger or even for a thief, since everybody would ponder over why I should grab another person’s heart.

The blind barman turned towards us.

“Mister illustrator,” he said, “you are irritated because they are looking at you, whereas many would be flattered. I wonder if you are hiding something and you are afraid it could be revealed under some persistent gaze…”

I got permission to speak and I said:

“Only those who do not have an evolved consciousness are afraid of something like that, whereas my friend is a modest and quiet person and that is the reason why he is bothered when he is at the centre of your attention.”

“Dear Sir, we consider whoever enters in here capable of defending himself,” he answered me. “Besides, it is not the illustrator who is accused, it is you. I commence therefore the procedure of your trial. The fact alone of losing one’s heart doesn’t say much. The realisation of the loss creates the problem. Like any event, however, this also constitutes the link of an endless chain, the endurance of which depends on the weakest link. So, wanting to test but also to be certain of its endurance, we will try to pinpoint the causes of the loss, the conditions which created it, and hence its consequences. Do not fool yourself. There is nothing personal against you or your companion. Whoever accepts such a loss must answer for his actions.

They didn’t realise that I had finished my story, and when they did, a sense of disappointment seemed to come over them. They were obviously waiting for something fancier and concrete, something more familiar, maybe something like the fairy tales they used to listen to as children; all except the illustrator, who, before I even finished, stood up and started dancing an ancient Greek dance, turning round and round with his arms spread and humming.

Following the initial bafflement of the judges, some set about taking part by whistling softly and clapping, whereas most of them fretted and complained loudly. Then the old judge shouted:

“Congratulations illustrator! You dance beautifully! You make me feel younger and wiser.”

Then two advisers from the one era and two from the other lashed out at him and whispered something to him with restrained anger. Immediately the judge regained his serious look and closed his eyes again which he had opened on account of his excitement.

“Back to work, back to work,” he repeated while clanging the crystal.

Everybody stopped at once and sat back down at their seats. Only the illustrator insisted in finishing his dance.

(I find these pieces highly thought-provoking Yannis. What do reviewers say?)

Here are some reviews written mainly by fellow authors on the website of the book, on Amazon uk, on Goodreads and on the blog Everybody’s Reviewing:

“From all the charms of Yannis Kyrlisʼ stories, the most fascinating one is the twist that comes with every ending. The writer employs the art of foreshadowing with real talent, constructing thus masterfully the plot which functions in two layers: in the surface layer, the writer introduces images and ideas which are apparently unrelated to the plot, but which, in the deeper layer, reveal the more philosophical and existential ideas that the writer wishes to communicate. As a result, like every other piece of real Art, the text acquires new meaning every time it is read. On the other hand, his cinematic descriptions bring the story and the characters to life. Finally, the element of the absurd and of the dream-like reality which describe the atmosphere of the stories, and especially of ʽʽThe Questʼʼ, prove without a doubt that this writer has actual imagination. His every story is a whole other world…”

“A great skill in creating unexpected, striking and fast interchangeable images, which penetrate each other. There always comes an abrupt and surprising consequence, which arouses curiosity. The roles are shared in a highly skillful and allegorical way. The text and the plot are often breathtaking, shaking the reader in a way incredibly hard and sweet as well, leaving behind an optimistic atmosphere, which is not obvious at first sight and cannot be precisely defined. The spare writing style and the plot of the stories are successfully abstract and surrealistic. I enjoyed the book so much that I read it all in one sitting!!”

“Twelve strangely brilliant stories: The more I read and go deeper into them, the more I get enchanted by them.”

“Yannis Kyrlis is a man who knows how to handle dreams and paint daylight with marvellous splashes of darkness. This is a collection with twelve short stories of sweet confusion, translated from Greek into English, and published by Austin MacAuley in 2017. In “The Threat”, Kyrlis builds his plot slowly and steadily and holds you there in this eerie story with clear-headed, fresh prose. The “Quest” is a touching, almost romantic story, and readers might find themselves asking if they have lost their hearts, if a lost heart can still be beautiful. It is an inspiring tale of a man who tries to find himself, helped by a stranger who knows how to recognise and paint the beauty of lost hearts, the Illustrator. Like the Judge in the story, sensitive readers will judge themselves and their actions. Some stories are very short, some are longer, like “Confession in a Café”, my favourite story in this beautiful collection. Here we witness again the author’s natural gift to bring in dreams halfway through a piece that is pure realism and take us once more into his strange world of symbols. If you are looking for explanations, look elsewhere, The “Quest” by Yannis Kyrlis will give you none of that.”

(You must feel enormously satisfied by those responses Yannis.)

I have drawn this sketch which symbolises the eerie, fluid character of the book, the absence of specific forms and boundaries, names of heroes, places, specific time and descriptions of characters. Everything happens somewhere sometime, in a dreamlike atmosphere or in a dreamy world, in which symbolism and allegory are the keys to understand it.

And, since my neighbourhood, Theseion, is located at the foothill of Acropolis in Athens, I took these photos to share them with you and your readers.

First of all you can see the Pnyx ((from the Greek word meaning “tightly packed together”), a hill in Athens (about which I have written in a recent, unpublished story), where the Athenians gathered to host their popular assemblies. Thus the hill became one of the earliest and most important sites in the creation of democracy. At Pnyx all the great political struggles of Athens of the “Golden Age” were fought out. Pericles, Aristides and Alcibiades spoke there, within sight of the Parthenon, temple of Athena, and Demosthenes delivered the famous Philippics, his vilifications of Philip of Macedon. 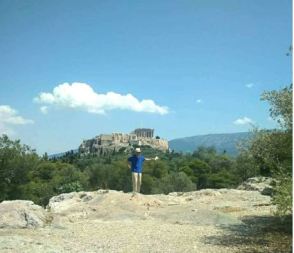 I am lucky to live close to Acropolis, to the ancient Agora (Market), the temple of Hephaestus and the green hills surrounding the ancient sites. 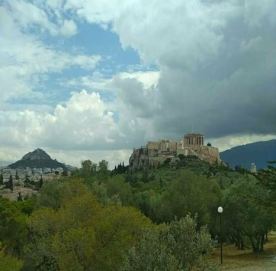 The Temple of Hephaestus or Hephaisteion or earlier as the Theseion, is a well-preserved Greek temple. It remains standing largely as built. And… the rock of Acropolis in the background. Photo by Christos_Ster.

The temple of Hephaestus at night.

What a super set of images Yannis. Thank you so much for being on Linda’s Book Bag and introducing The Quest – A Collection Of Short Stories. It’s been a really interesting evening.

The Quest – A Collection Of Short Stories

In The Quest – A Collection of Short Stories Yannis Kyrlis presents a mysterious and dream-tinged collection which focuses on the abstract, the emotional and the hazy difference between dreams and reality. A man loses his heart, and finds it drawn by an illustrator who tries to redeem him. A couple exploring a dump find an object that calls to them, but will they still be in love by the time it reveals its true origin and impact on their lives? Will a young Greek boy find the answer to his existence in a dream, or should he keep running from it?

In this immersive collection of short stories, Yannis Kyrlis effectively combines the surreal, weird, and the deep emotional core that exists within every man or woman.

Published by Austin Macauley, The Quest – A Collection of Short Stories is available for purchase here.

Yannis Kyrlis was born in Xanthi, North Greece, where he had been working in the private sector. He is a father of two, he has been a resident of Athens for many years, and he is occupied with writing literature.

One thought on “Staying in with Yannis Kyrlis”