I’m delighted to be part of the launch celebrations for Dead Lock by Damien Boyd and would like to thank Gaby Drinkald at Midas PR for asking me to participate.

I’m also thrilled that Damien has agreed to stay in with me today to tell me all about Dead Lock – the eighth stand alone book in the DI Nick Dixon Crime Series.

Early on a cold Somerset morning, ten year old Alesha Daniels is reported missing by her father, a violent alcoholic. Her mother, a known drug addict, is found unconscious, but it’s her mother’s boyfriend the police are keen to trace.

As the hunt for Alesha gathers pace, a second local girl is taken, plunging another family into the depths of despair.

Cutting short his holiday, DI Nick Dixon races home to join the Major Investigation Team, but no sooner has he identified a network of local suspects than they begin to show up dead.

At odds with his superiors, Dixon is convinced the child abductions are anything but random, but nobody is prepared for the investigation to lead quite so close to home.

Can Dixon and his team crack the case before all the suspects are silenced? And will he find the missing girls before it’s too late?

Staying in with Damien Boyd

Welcome to Linda’s Book Bag, Damien. Thank you for agreeing to stay in with me. I know you’ve brought Dead Lock to share with us but why have you brought it?

Thanks Linda. I’ve brought my latest book – Dead Lock – because it’s my favourite, but then my latest book is always my favourite until I’ve finished the next one, I suppose. It may be number 8 in the DI Nick Dixon Crime Series, but each book is a standalone, with a beginning, a middle and an end, so they can safely be read out of order.

(That’s great to know that each book is a stand alone Damien as blog readers often ask.)

It’s also something of a rollercoaster ride for several of the recurring series characters and the ‘romance’ between Nick Dixon and his partner, Jane Winter, takes a step forward as well. Oddly enough, it was only at a recent event that I found out I was writing a romance series when audience members pointed it out. ‘We love the romance between Nick and Jane’, they said. I must confess that it happened by accident really, but now I nurture that sub-plot!

(Brilliant! I love it when characters take over from a writer and lead the way!)

What can we expect from an evening in with Dead Lock?

One early reviewer has been very kind enough to describe Dead Lock as a ‘…a tense read with some amazing twists…’ I’m still buzzing from that one! The same reviewer also went on to say, ‘I’m impressed at Mr Boyd’s ability to draw the reader in and hold them captivated.’ That was most kind of her 🙂

(I’m sure it wasn’t kindness, Damien. We reviewers tend to say what we really think!)

Dead Lock is something of a departure for me in that Nick is on the trail of two children who have been abducted, rather than a serial killer. Yes, there are murders, but as the same reviewer pointed out, they are almost incidental to the hunt for the children. I’m hoping that the reader will experience a rollercoaster of emotions, both the tension as they follow the frantic police investigation, and the anxiety and panic of the families plunged in to their worst nightmare.

Tension, yes; ‘heart in mouth’ moments, I hope so; and even a few tears maybe. I will admit to tears streaming down my cheeks when I wrote some of the scenes. There’s a even some humour in there to make you smile and lighten the atmosphere a bit.

(I adore books where I can have a good cry and this description has made me even more determined to get Dead Lock to the top of my TBR pile. It sounds fantastic.)

If my wife’s not going to be joining us then I’ll bring chocolate. Lots of it! Shelley is diabetic, which is where Nick Dixon gets it from, but it does mean that chocolate is not allowed in the house. Strawberries and cream too; cake. And a glass of beer or three. Music would have to be U2 or Adele. An odd mix perhaps, I know.

(I love your music choices, though is it selfish of me to say I’m glad Shelley can’t come so that we can have chocolate?)

What about other guests?

Guests? Now that’s a tricky one. Most of my preferred guests are no longer with us, sadly. I’d love to have met Agatha Christie and Colin Dexter, to name just two. From the living, I’d love to meet Felix Baumgartner — I’m still mesmerised by his jump from the edge of space. But, if we are sticking with authors, then Val McDermid, if she’s free, and Dr Geoff Garrett. Cause of Death, his memoirs of a Home Office pathologist, was fascinating and I’d love to question him on the stuff he couldn’t print!

(That sounds a fascinating set of guests – and you’re allowed those no longer with us too. I notice you’ve brought a photo too. What is it?) 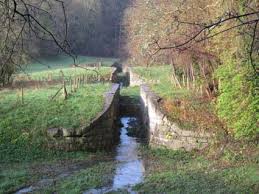 It’s one of the old Somersetshire Coal Canal. Abandoned locks loom out of the trees as you walk up through the woods behind Combe Hay, testament to a way of life long since consigned to history. There’s a ‘dead lock’ in those woods too…

Thanks so much for staying in with me Damien, to chat all about Dead Lock. I think it sounds a cracker of a read and I’m very much looking forward to it.