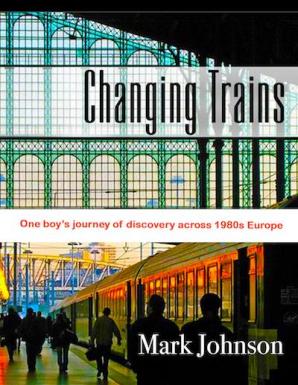 I’m often flying off to new places but I don’t travel much by train (though I have been on the Bullet train in Japan) so it gives me enormous pleasure to welcome fellow traveller Mark Johnson to the blog today as he stays in to tell me about his book.

Staying in with Mark Johnson

Hi, first of all thanks for asking me. It’s lovely to be here with you.

Lovely to host you Mark. Tell me, which of your books have you brought along to share this evening and why have you chosen it?

I’ve brought my debut novel Changing Trains. Apart from being my first work, I brought it because I wanted to take you back to the 1980s, when Europe was still emerging as a Continental powerhouse.

We still had border controls, and every country had its own currency. But more importantly, it was that time just before our lives were all changed by the arrival of the internet, mobile phones and, ahem, social media.

(Absolutely. I was just finishing my degree, getting married and starting my career in education. The 1980s mean a lot to me and I think Changing Trains could be exactly my kind of read.)

What can we expect from an evening in with Changing Trains?

One reader referred to the story as ‘a gentle, coming-of-age travel adventure’, which I really liked. It tells the story of Sam, a London professional who, while boarding a Eurostar to France in the present day, has a chance encounter that compels him to remember another train journey he took as a young man, back in 1985, that changed his life and destiny.

If you’ve read Call Me By Your Name, or seen the BAFTA and Oscar winning film of the same name, you may also like Changing Trains. Another reader said  they thought it had a similar feel and mood and could even be the story of what happened to that story’s main character next.

The story is about travelling, learning about new countries and also finding one’s place in the wider world. When Sam set off on his adventure at 19, he has no idea who he is or what he wants to do. There are also questions he must face about his own inner self. He’s uncertain of his sexuality – although he has a ‘kind of’ girlfriend – and taking himself off into the world and away from his small town origins helps him come to terms with this question.

(I adore travel and I really do think it broadens the mind and helps us understand our place in the world. I think Sam’s story sounds wonderful Mark.)

Let’s start with the music, to get the mood going. I’ve brought an old mix tape with some Jimmy Somerville, Simple Minds, Duran Duran, Spandau Ballet and Culture Club. This is the kind of music Sam has on his Walkman as he wanders around on Europe’s trains with his Interrail pass.

(Oh yes indeedy – my kind of music. Though I’m sorry there’s no Roxy Music too. I’m rather fond of Bryan Ferry. You won’t mind if I have a bit of a dance will you?)

I also brought a bottle of Chateauneuf du Pape white. It’s not very well known that there’s a white version, but it’s one of my favourites and perfect for kicking back with a good book. If you want to open it, I’ll carry on.

I also have some photos of my Interrail trip. Changing Trains isn’t an autobiography, but I did go Interrailing in 1985 and this was the inspiration for the book.

In one of the photos, you’ll see my Interrail pass, International Youth Hostel Guide and a city map of Venice. Of course, these days, you would probably have all these in digital form on your mobile phone, but there’s something about having the real things in your hands. And they never run out of power. 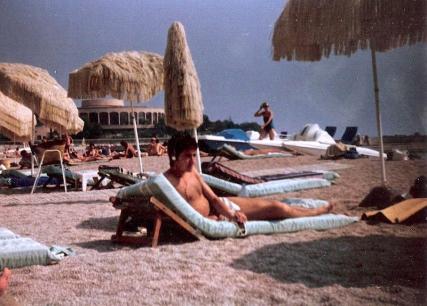 In another picture that’s me chilling out on Monte Carlo beach. I forgot I had this picture and only found it recently. I love it because it has a real sense of place thanks to the unique Monte Carlo Sporting Club in the background. I also thought it was so cool that they actually used natural materials for the parasols on this very posh beach. Very green and eco friendly. My character Sam visits this same beach in the book and has a rather risqué encounter there. That’s all I’m saying.

(Now that is intriguing! Great photo Mark – a real 80s feel to it.)

The last photo is my favourite. The old French SNCF trains look so nostalgic now and really like something from the golden age of rail travel, even though they were notoriously late and not always very reliable. I actually wrote much of the book while travelling back and forth between London and SW France on the Eurostar and TGV trains, which are far more comfortable and luxurious, but they don’t have the same character as the old trains.

I still travel on the Eurostar and TGV trains, so if you see me typing away or staring out the window (what I call research), do say hello.

Thanks so much for staying in with me Mark, to introduce Changing Trains. It sounds like a book that might just evoke many memories for me and Linda’s Book Bag readers. I’ve really enjoyed our time together.

If you liked Call Me By Your Name, Changing Trains will transport you back to the same time period and one working class boy’s coming-of-age journey of discovery and sexual self awareness.

After a busy week in the newsroom, editor Sam is looking forward to relaxing on his regular Eurostar journey from London to his second home in the south west of France.

But a chance encounter at the busy station compels him back to a time in the 1980s, when he travelled parts of Europe by train alone and in search of adventure, self discovery and his place in the world.

A sun-kissed, coming-of-age story set in a time just before mobile devices, the internet and social media, Sam travels across Europe, with its varied currencies, border controls and strange cultures, keen to better understand his own nature and his relationship with others in a new emerging world. 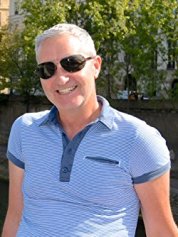 Mark Johnson is a Scottish born journalist, writer and broadcaster. For three years he wrote a weekly column for the Daily Telegraph on life as an expat commuter. He has also worked for award winning news organisations such as the BBC, Bloomberg TV and Dow Jones Newswires.

He’s spent most of his life working as a journalist in the City of London, covering the ups and downs of the global financial markets.

In the noughties, he spent three years living in Dubai and has extensively travelled the world for work and pleasure.

He now lives between London and New Aquitaine in France, traveling often by eurostar and TGV and longs for the day when he doesn’t have to ‘change trains’ to get to the south west.

You can find out more by visiting Mark’s blog, following him on Twitter @MJKennington or finding him on Facebook.

One thought on “Staying in with Mark Johnson”