I can’t believe it’s almost exactly three years since one of my very first blog posts was a review of Little Black Lies by Sharon Bolton. You can see that review (and how Linda’s Book Bag has changed) here.

Today I’m thrilled to be part of the launch celebrations for Sharon Bolton’s latest book, The Craftsman, and would like to thank fellow blogger Tracy Fenton and LeanneOliver from Orion for inviting me to participate.

Published by Trapeze, an imprint of Orion, The Craftsman is available for purchase through the publisher links here. 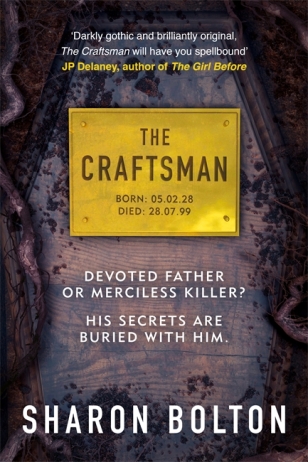 His secrets are buried with him.

Florence Lovelady’s career was made when she convicted coffin-maker Larry Glassbrook of a series of child murders 30 years ago. Like something from our worst nightmares the victims were buried…ALIVE.

Larry confessed to the crimes; it was an open and shut case. But now he’s dead, and events from the past start to repeat themselves.

Did she get it wrong all those years ago?
Or is there something much darker at play?

My Review of The Craftsman

As a young inexperienced policewoman, Florence Lovelady finds herself an outsider in a community where children are going missing.

I really, really enjoyed The Craftsman. Sharon Bolton has such assurance in her writing that it feels a total pleasure to immerse yourself as a reader in her narrative. The first person approach means that Florence has a clear and striking voice making every element of the story absorbing and plausible. Normally I prefer stories that remain in one time frame, but The Craftsman is written with such skill that the two eras, whilst distinct and evocative in their own right, are so well linked and so perfectly balanced that I loved the approach here.

The plot races along. Although some elements are fairly easily guessed, this doesn’t detract from the story but rather gives a sense of satisfaction. I loved the analogous use of quotation from Shakespeare, and both the obvious and implied links with Macbeth that weave through the text especially, because they gave an added depth to an already engrossing and captivating read and hinted at a world beyond just the corporeal. Much of the time when I was reading I experienced an unnerving frisson of fear and, indeed, of plausibility so that reading The Craftsman has left me unsure of my own beliefs. On occasion it is incredibly creepy. There’s a seamless blend of the prosaic and the mystical as well as a clear insight into old fashioned chauvinistic policing that I thought was completely compelling. This is such well balanced writing.

I thought the creation of character was outstanding. Each individual is so complex and flawed and yet utterly believable that they hold a fascination for the reader. I can’t say too much without revealing parts of the story which would spoil the read, but there are still those about whom I am undecided; Florence, Tom and Dwayne especially, even having read the climax to the story, so that there are multiple ways of enjoying this book.

The Craftsman is a cracking crime thriller, but it is so much more besides. It is an exploration of the world we inhabit and the world we don’t. Sharon Bolton challenges our thinking of how patriarchal society and mystical belief works. Reading The Craftsman has left me enormously entertained and really quite unsettled. I recommend it without hesitation as a cracker of a read.

Sharon (formerly S J) Bolton grew up in a cotton-mill town in Lancashire and had an eclectic early career in marketing and public relations. She gave it up in 2000 to become a mother and a writer.

Her first novel, Sacrifice, was voted Best New Read by Amazon.uk, whilst her second, Awakening, won the 2010 Mary Higgins Clark Award (part of the prestigious Edgars) in the US. In 2014, Lost, (UK title, Like This, For Ever) was named RT Magazine’s Best Contemporary Thriller in the US, and in France, Now You See Me won the Plume de Bronze. That same year, Sharon was awarded the CWA Dagger in the Library, for her entire body of work. In 2016, Little Black Lies won the Dead Good award for the best twist.

She has been shortlisted for the CWA Gold Dagger, the Theakston’s Prize for Best Thriller, the International Thriller Writers’ Best First Novel award, the Prix Du Polar in France and the Martin Beck award in Sweden.

With ten books to her name, Sharon is a Sunday Times bestselling author and has been described by a reviewer for that newspaper as being ‘unable to write a sentence not suffused with menace.’

Sacrifice has been made into a Hollywood film starring Radha Mitchell, Rupert Graves and David Robb. Little Black Lies and the Lacey Flint series have been optioned for TV.

Sharon lives with her family of four, one of whom is a food-stealing, rabbit-chasing lurcher, in the Chiltern Hills, not far from Oxford. 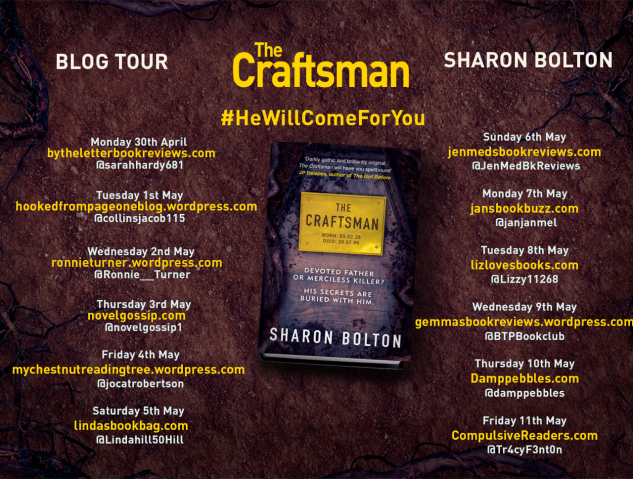 6 thoughts on “The Craftsman by Sharon Bolton”