I love a twisty thriller and am delighted to be part of the launch celebrations for Beautiful Liars by Isabel Ashdown. My grateful thanks to Tracy Fenton and Sam Eades for asking me to participate. I have a corker of an extract from Beautiful Liars to share with you today.

Published by Trapeze, part of the Orion Publishing Group, Beautiful Liars is available for purchase through the links here.

The next morning Juliet’s bike was found abandoned at the waterside.

She was never seen again.

Nearly two decades later Martha is a TV celebrity, preparing to host a new crime show… and the first case will be that of missing student Juliet Sherman. After all these years Martha must reach out to old friends and try to piece together the final moments of Juliet’s life.

But what happens when your perfect friends turn out to be perfect strangers…?

An Extract from Beautiful Liars

I had been sitting on that wooden bench for a while by the time the two girls came strolling along the darkened canal path, wheeling their bicycles between them, flawless in the fractured shades of evening. I strained to tune into their conversation as their soft tones drifted towards me on the winter air, tried to make out their features as the flash of lamplight illuminated their young skin and flowing hair. Silently I left the bench to disappear myself into the shadows of the hedgerow, where I might remain unseen, invisible as a ghost. Look at them! I marvelled. They glide with the carelessness of creatures accustomed to their own beauty, for they’ve never known anything different, have they? Since their first breath, one imagines they have been told it. What a beautiful baby, strangers would have said. What a beautiful little girl. What a beautiful young woman. The one I had my eye on reminded me so much of another I’d once known, a lifetime ago, in a different place, a different time altogether. It occurred to me in that moment, as I tracked those unsuspecting fawns, that beauty is surely the strongest currency – the most potent of lures. What unsightly man or woman in possession of a great fortune wouldn’t readily swap a large part of it for just a little of that magic?

Before long, the girls paused where the footpath opens out on to the main street beyond, now only a short distance from me, continuing to speak in hushed tones.

‘It must be more than that,’ the girl in the striped hat said, turning her bike wheels towards the exit path. The elegant lines of their bodies, the juxtaposition of the two bicycles at opposing angles, seemed almost balletic in its arrangement. ‘It’s not like Liv to lose the plot so easily. Me, yes – but not Liv.’

The taller girl lifted one delicate wrist, pushing back her thick hair, a swirl of white breath drifting from her mouth like mist. ‘Honestly, I haven’t got a clue. It isn’t just you she’s been funny with lately.’ She tugged at the white tabard she wore over her winter coat, readjusting its hem to bring the Square Wheels logo into clear view.

‘She even had a go at Tom earlier,’ said the other. ‘I still reckon she’s got a thing for him. She seems to be hanging round your house a lot more lately.’

The Square Wheels girl laughed raucously, betraying her real self, and I swear I saw the brightness of her sputter like a flame in a draught. ‘No, I already asked her. She said she’d never be interested in Tom – and anyway, he’s just started seeing some girl at uni.’

It was strangely exhilarating to listen in, unseen, to hear them talk of boys in this casual, disposable fashion. I almost forgot why I was there, what it was that I came to the waterside to do. To my irritation a rush of traffic passed beyond the hedgerow, drowning out their words, though it was clear to me there was tension between them when their voices drifted back into my earshot. The striped hat girl turned her bike around to face back the way they’ve just come.

‘Can’t you leave it until tomorrow?’ asked the other. It sounded like a complaint.

‘No – the café doesn’t open up until mid-morning, does it?’ There was impatience in her voice now, her words slurred. They’d been drinking, that much was clear. ‘Anyway, I don’t want to risk someone nicking it.’

Another cyclist zipped by, going one way; a dog walker passed along the path in the other. The girls lowered their voices and I could feel the strained atmosphere between them as I struggled to listen in. But all I could make out was ‘tomorrow’, delivered with resignation in its tone. ‘Promise?’ the other one said in reply, and they embraced stiffly before the girl in the hat cycled away, her figure disappearing into the night.

For just a brief moment, the lone girl paused on the frosty path, her eyes resting on the gently rippling surface of the water, and I saw something shift in her expression. What was it? Sadness? Regret? Whatever it was, it was fleeting, vanishing entirely as she mounted her bicycle and pushed away, sailing past me, flaxen locks streaming behind her like spun gold.

‘Oh, hello!’ I called after her, feeling a surge of panic rising as I stepped out on to the path and adrenaline flooded my veins. ‘Hi!’

She came to a stop, jerkily hopping on one foot as she twisted to look back at me, her mouth breaking into a broad, gleaming smile. ‘Hi!’ she called back lightly, and she seemed pleased to see me. She had the power to paralyse, that one. ‘I’m late, aren’t I? Has everyone else headed off?’

‘No, you’re fine,’ I replied, beckoning her over. ‘Actually, I’m glad you’re here,’ I said as she approached, indicating towards the shadows at the foot of the bench. ‘I’m having a bit of trouble with this—’

As she bent to take a closer look I glanced up and down the empty towpath and hooked the fishing rope beneath her beautiful chin, tugging her up and towards me, crossing my wrists to close up the circle and shut off her breath.

Right up until that moment, I believe I had only meant to talk with her. Of course the rope was coiled and ready in my pocket, and one might gather from that alone that I had waited on the path with the sole intention of extinguishing that girl’s life. But that wasn’t how it was: the rope was merely a precaution – something I’d picked up in the cabin earlier that same evening, sliding it into my pocket without malice or plan. Even as the girl took her last gasp, as her mittened hands fumbled to gain purchase on mine, her writhing legs slowing to a weak judder, I regretted not talking to her as I had planned. If I’d just spoken with her, as I’d intended, things could have worked out quite differently. I know that now; I know now that I got a few things wrong. A little mixed up, you might say.

But I’ve always been somewhat rash; it’s a curse.

(Oh my goodness. What an extract from Beautiful Liars. I can’t wait to read the rest now.) 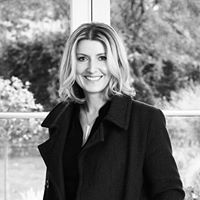 Isabel Ashdown was born in London and grew up on the Sussex coast. Her award-winning debut Glasshopper (Myriad, 2009) was twice named as one of the best books of the year, and she now writes full-time, walks daily, and volunteers in a local school for the charity Pets as Therapy. She is currently a Royal Literary Fund Fellow at the University of Chichester. 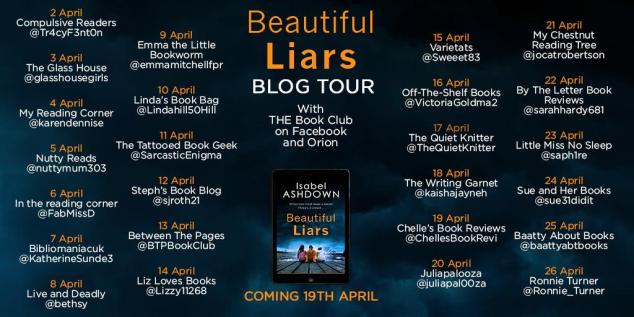 8 thoughts on “An Extract from Beautiful Liars by Isabel Ashdown”