I so enjoyed The Rosie Project and The Rosie Effect by Graeme Simsion, that when I heard Two Steps Forward by Graeme Simsion and Anne Buist was available for request on Netgally I broke my own self-imposed ban and requested it. I was, thankfully, approved, but even better, the day after, an advanced reader copy arrived unexpectedly and I would like to thank Two Roads books and Rosie Gailer for sending it to me.

Two Steps Forward will be released by Two Roads Books on 5th April 2018 and is available for pre-order here.

Zoe, a sometime artist, is from California. Martin, an engineer, is from Yorkshire. Both have ended up in picturesque Cluny, in central France. Both are struggling to come to terms with their recent past – for Zoe, the death of her husband; for Martin, a messy divorce.

Looking to make a new start, each sets out alone to walk two thousand kilometres from Cluny to Santiago de Compostela, in northwestern Spain, in the footsteps of pilgrims who have walked the Camino (the Way) for centuries. The Camino changes you, it’s said. It’s a chance to find a new version of yourself, and a new beginning. But can these two very different people find themselves? Will they find each other?

In this smart, funny and romantic journey, Martin’s and Zoe’s stories are told in alternating chapters by husband-and-wife team Graeme Simsion and Anne Buist. Two Steps Forward is a novel about renewal – physical, psychological and spiritual. It’s about the challenge of walking a long distance and of working out where you are going. And it’s about what you decide to keep, what you choose to leave behind and what you rediscover along the way.

My Review of Two Steps Forward

Zoe and Martin have very different reasons for beginning the walk to Santiago de Compostela, but their paths might just overlap.

I’m not usually overly fond of narratives structures that alternate from one protagonist to another but I thoroughly enjoyed Two Steps Forward. It was everything I hoped it would be from Graeme Simsion and his wife, Anne Buist. The structure is perfect as the two ‘steps’ or threads of the story reflect the rhythm of putting one foot in front of the other to walk the Camino. I love the fact that the story has arisen out of the authors’ own experiences walking the same route as Martin because there is a realism and a vividness to the writing that places the reader on the route too. The landscapes, villages, hostels and bars come to life with wonderful accuracy so that I could picture exactly what I read. In fact, reading Two Steps Forward has made me want to head off and complete the walk myself.

However, Two Steps Forward is so much more than a rather good travelogue. It is a beautifully written and cleverly constructed love story that embodies all the emotions that a reader would want. I was, at times, completely frustrated by Zoe and Martin’s fluctuating relationship and I think this is exactly as it should be. It means I experienced the same emotions they did and made for a very personal reading experience. I ended the story feeling quite in love with both of them myself. I really enjoyed meeting all the various characters as they wove in and out of the story, creating their own tapestry that the reader is privileged to enjoy.

But for me, the wonderful element of Two Steps Forward is its ability to make the reader consider their own values and lives. There are so many levels to this narrative. Partly it is a highly entertaining and frequently humorous story, especially through the wickedly droll depiction of the different nationalities, but also Two Steps Forward reveals the way in which we hurt ourselves as well as others, how we need to be kind to, and honest with, ourselves and how spirituality and contentment are not found in buildings or places, but within ourselves. The metaphors of jettisoning baggage both literally and emotionally are sensitively handled so that Two Steps Forward (and its implied one step back) never feels priggish, but rather is refreshing, human and captivating.

Two Steps Forward is a delightful book. It affords the reader an insight deep into the souls of two very human characters, Zoe and Martin, and allows them to share a very personal and, actually, very moving story. I highly recommend it.

About Graeme Simsion and Anne Buist 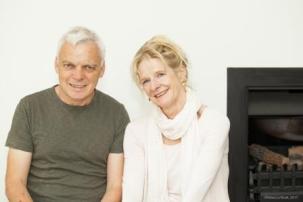 Graeme Simsion is a former information technology and business consultant, who specialized in data modeling, information management and consulting practices.

He is now a full time writer of fiction. His first novel, The Rosie Project was published in Australia by Text and Michael Joseph (Penguin) in the UK.

Anne Buist is the Chair of Women’s Mental Health at the University of Melbourne and has over 25 years’ clinical and research experience in perinatal psychiatry working on cases of abuse, kidnapping, infanticide and murder.

She is married to novelist Graeme Simsion and has two children.

The first novel featuring forensic psychiatrist Natalie King, Medea’s Curse, was published in the UK by Legend Press in 2016. The UK edition of Dangerous to Know, Anne’s follow-up novel, was also published by Legend Press March 2017.