My grateful thanks to Anne Cater, fellow blogger and organiser of Random Things Tours, for inviting me to be part of the celebrations for The Hope and Anchor by Julia Kite. I have a smashing extract to share today.

The Hope and Anchor

When a vulnerable young woman goes missing, her girlfriend discovers how little she knows of life, love, and London.

Two crucial parts of Neely Sharpe’s life are missing: Her once-great potential and her girlfriend, Angela. A failed academic turned frustrated office drone who had assumed that once she made it to London, she would be somebody, Neely finds herself tasked with a job finally suiting her intellect – piecing together the hidden life of the working-class, epileptic, and quietly devoted woman she loves.

As the crucial days of Angela’s disappearance pass, Neely excavates Angela’s secrets, uncovering a sister who pushed her family away, a father obsessed with immortalising it, and a smattering of locals who don’t let their own problems get in the way of poking around in those of others.

In search of answers as to what happened to her girlfriend – and why – Neely scours the city, from parks to pubs to the sewers in a snowstorm as the two women’s networks of friends, family, and old adversaries intertwine.

In order to find any answers, Neely risks losing all the illusions she so carefully cultivated about what her life should be – but for the generation that was promised so much, one thing is certain: there is nothing worse than being a nobody. The Hope and Anchor captures the dreams London embodies for its natives and newcomers alike, and what happens when the dreamers finally have to wake up.

An Extract from The Hope and Anchor

If Angela was not in, then it made sense to Neely that she must be out. Basic logic, common sense. Any idiot could figure that out, and Neely had always thought herself more than a scratch above any idiot, and so she locked the door and hit the pavement in the evening chill. Neely did the Harrow Road door-to-door, a tour of the pubs and their yellow-lit insides. Why might Angela be in the pub? Again, logic: she might be in the pub because she was definitely not in the flat, and if she was not in the pub, then that would be one less place left to look afterward. Simple as.

A peek in the Barlby Arms: no Angela. Not on either side of the wrap-around bar, which split the pub evenly down the centre and gave it the only bit of charm to be found within its walls. She was not sitting by the old men watching the cricket, nor was she among the tracksuited wasters around the snooker table. The Windsor Castle: no sign of Angela Archer. No sign of anybody in particular, because the clientele at that moment certainly counted as nobodies. Neely recognized them. The gingery one with the broken nose and the fingers shakily looking for something to scratch was called Rob, a fitting name for someone whose only useful skill seemed to be thieving. His girlfriend, Gina, sat across from him. Her lips were split again. Rob wasn’t responsible for that. He’d have a go, and usually an ill-advised one that left him the worse off, at anybody except his girlfriend. He’d go especially mental on anybody who looked at her sideways. Neely knew this. She’d seen it happen before on the corner of Harrow Road and Elgin Avenue just around kicking-out time. Gina had spoken three words to Neely in all her life: “Black don’t crack,” with a cackle, when she saw Neely staring at a scrape on her cheek one night during a pub quiz. But it just did, Neely had thought back, smiling only to be polite. Rob and Gina hadn’t been playing that night. They never did.

The pub quiz this night wasn’t at the Windsor Castle, though. It was down the road. Rob and Gina always migrated pub to pub, wispily, like Neely was doing now, and as she leaned her full weight into the door of the Hope and Anchor and grunts it open, the heat and the noise rushed to meet her. Melanie the barmaid’s eyes did, too. Her face registered relief for a split second before she covered it with an asinine grin. On nights like this, she served as quizmaster and ringmaster of a human circus with far too many coked-up amateur clowns and no safety net beneath the trapeze. Mel was in fact younger than Neely, but her overall appearance was that of a once-stunning outfit that had been put through the wash twice as often as recommended, and on a turbo spin cycle at that. She had both faded and sagged considerably from the last time she and Angela Archer shared a classroom at Sion Manning School. Her ankles were too big for her high heels, which were too high for any practical purpose and made her wobble on the carpet. The thick, inexpertly-applied highlights in hair pulled tight against her skull gave the impression her head had been burnished by a sculptor who had quickly lost interest and moved onto the next project before finishing the first. The overall effect screamed, from every curve: I will grow old here and I will die here and when that happens I will be doing the exact same thing I am doing now. And right now, she was verbally wrangling a speeding skinhead who had greeted Neely’s arrival with nothing less than the facial equivalent of a raging hard-on.

“Is that the stripper? Told you, we should have a stripper in here, not a fucking quiz.”

“Shut up. No, it’s the encyclopedia. We’ll ask her. Her decision is final, OK?”

“Could still be the stripper if she’s up for it.”

“Fuck off! Her missus will poison you for that.”

“Her missus! Girl-on-girl? You’re sitting on a goldmine here, Mel!”

The barmaid-turned-emcee snorted and turned to the newcomer. “Neely. Question. Settle this for us: is Pluto a planet now or not?”

From the same stubble-ringed mouth, on the same tirade: “Why can’t we just fucking Google it?”

She glanced from the man to the barmaid and back. “Well, that’s the thing, it was, and then they got rid of it, and maybe they’ll bring it back, but not yet.” And then she gave them what they had asked for: “No.”

“Ha!” Mel hollered. “Sit down, Jim, Brainbox says I’m right, Pluto’s not a planet anymore. The correct answer is that Venus is the smallest planet around. Goddess of beauty. Small but perfectly formed. Like this girl here. You’re wrong, you’re wrong.”

“It’s Mercury, though,” Neely blurted, unaware her time to contribute was up.

“Mercury’s the smallest planet, not Venus.”

The room breathed; first, a silent inhalation before a burst of laughter.

“Change of plans, Mel! Let Shorty here run the quiz and you go get your kit off, get on top of the bar!”

“Fuck you. OK, that question is a freebie. Everybody gets a point. So that means…alright, the standings are, it’s Great Western Wasters with 6 points, Doctor How with 7, and both Quizlamic Jihad and I Wish This Microphone was Jim Newlands’ Cock have 8. Happy now?”

“Happier now you’ve finally admitted it!” the Jim in question yelled, and the room hooted as if they hadn’t heard this play out every week since time immemorial.

“OK, five minutes, everybody go have a piss – in the actual toilet this time, Martin! – and then it’s the picture round,” Mel snapped, dismissing her audience before turning to Neely. “Alright, Neely? The shitshow’s in full force tonight. Ignore Jim. He’s pissed but he’s harmless.”

Neely straightened her face. “I’m alright. It’s just, has Angela been in today?”

“Nah. Haven’t seen her. Everything alright?”

“Can’t find her. She’s not answering her phone.”

“Ooh. No, haven’t seen her since yesterday. You two fall out?”

“No. Why? Why was she in here yesterday? When?”

Mel leaned back dramatically. “Jesus, cool your boots. Just saying, she was alone yesterday, and you’re alone now. Well, she wasn’t alone yesterday, it’s just that you weren’t with her. Haven’t seen that since before the two of yous were together.”

“Nobody. Well, Rob. She talked to Rob a bit, before Gina came in. Then Gina started giving her evils so she backed off. How thick would you have to be to think Angela wants anything to do with him? Fucksake.”

“Did you hear what they were talking about, then? Angela and Rob?”

Mel’s patience depleted faster than the average pint of beer on this particularly wet weekend night. “Neely, I have better things to do then stick my nose in the business of every single person who comes in for a drink, yeah? Leave it out. She was here, you were elsewhere, you both have your own lives. If you two are having problems, I’m not getting involved.”

“We’re not having problems. I just…I’m sorry. I’m just worried about her. This isn’t like her.”

“Maybe her phone’s broken. Maybe she just needs a little time on her own. Relax.”

“For what it’s worth, she looked like she was having a good time. Let her tell you about it. Just don’t smother her. She’s been smothered her whole life by people worried about her. Alright?”

“Cheers,” Neely said, with no conviction and even less gratitude.

“Sure everything else is alright? The two of you really didn’t fall out? You look like you’ve seen a ghost. One who’s stripping on the bar like Jim said.”

Of course everything’s not alright, she thought. I just told you. I can’t find Angela. How do you think that’s alright? In what solar system would that be alright? But she held her tongue to retain an ally, no matter how tentative. Laughed at herself. “Yeah. Everything else is fine.”

“I swear I’ll send her to you quick-style if she shows up.”

“Great. Great.” Lying was easier than she expected. Neely didn’t bother to look around, to survey the scene for herself. She took the startled face and the body to which it was conveniently attached, turned, and faced Harrow Road once again.

Julia Kite lives in Manhattan, and calls New York City and London home. She is a graduate of Columbia University and the London School of Economics. Obsessed with cities and the people in them, she started her career researching housing and urban regeneration, and she now directs policy and research for a transportation improvement organisation.

Before she began working to make New York City’s streets better for cyclists, she was taking long rides along the Grand Union Canal in West London. She is a member of the Columbia Fiction Foundry, an alumna of quiz shows The Chase and Jeopardy, an urban wildlife rehabilitator, a keen amateur baker, and the owner of an opinionated parrot. The Hope and Anchor is her first novel, a work of fiction about a very real place she holds dear. 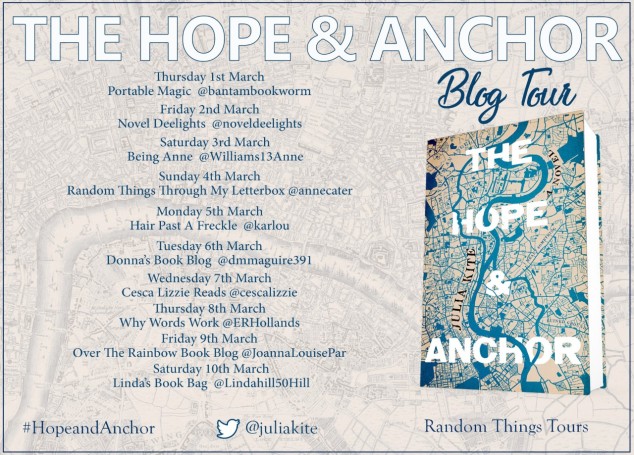