My grateful thanks to Anne Cater, fellow blogger and organiser of Random Things Tours, for inviting me to be part of the celebrations for Unbroken by Madeleine Black. With such an important subject I was honoured to take part.

Unbroken is published by John Blake and is available for purchase here. 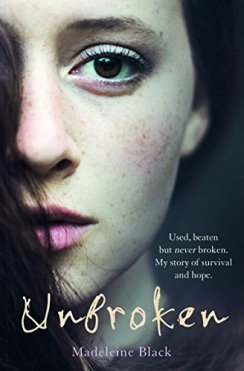 For many years after that night, my memories of what happened after he held the blade to my throat and threatened my life were fragmented… difficult to piece together. It was too extreme, too violent for me to understand.

Violently gang-raped when she was thirteen years old, and raped three more times before the age of eighteen, Madeleine has experienced more trauma in her life than most ever will.

Living in a state of shock and self-loathing, it took her years of struggle to confront the buried memories of that first attack and begin to undo the damage it wrought, as men continued to take advantage of her fragility in the worst possible way.

Yet, after growing up with a burden no teenager should ever have to shoulder, she found the heart to carry out the best revenge plan of all: leading a fulfilling and happy life. But the road to piecing her life back together was long and painful. For Madeleine, forgiveness was the key. True forgiveness takes genuine effort. It takes a real desire to understand those who have done us so much harm. It is the ultimate act of courage.

In Unbroken, Madeleine tells her deeply moving and empowering story, as she discovers that life is about how a person chooses to recover from adversity. We are not defined by what knocks us down – we are defined by how we get back up.

My Review of Unbroken

Being abused and broken in the past does not have to define negatively who we are in the present.

My goodness Unbroken is a powerful read. It’s not for the fainthearted as Madeleine Black is uncompromising in her descriptions of what has happened to her in the past. It is this bald honesty that makes Unbroken such a compelling and frequently quite horrifying read. Madeleine Black’s style is focussed, simple and clear with no mealy-mouthed and obfuscating euphemisms. She tells things as they really are so that the reader is left with pin-sharp understanding and I have the utmost respect and admiration for her for doing so. I feel as if I have been thoroughly enlightened and jolted out of my day to day complacency. Whilst I may never have endured the kind of events Madeleine Black has taken her strength from, reading Unbroken has made me grateful for my life and determined to make the most of every day in the future. It is not just those who have had similar experiences who can benefit from reading Unbroken, but all of us, regardless of gender, sexual orientation, class, race or place in society. I’d like to see parents, teachers and teenagers especially reading it because I think it could prevent future crime and future damage to young lives.

In a world where much is made of the ‘journey’ we’ve all been on, whether that’s learning to dance or to iceskate on national television, Unbroken truly is Madeleine Black’s journey. She has several false starts and there are times when I felt frustrated by the way she was shaped by the events in her life, but not once did she lose my sympathy and my fascination. I was very interested in the different approaches and therapies she tried in order to regain control over her own destiny so that there are activities I think I might like to try out too that I wouldn’t have otherwise known about.

I can’t say I enjoyed reading Unbroken because of the terrible subject matter. However, I was moved by it, educated and ultimately uplifted and inspired.  I hope Madeleine is now truly free to fly – she absolutely deserves it. I genuinely think Unbroken might be one of the most important books of its generation.

The sharing of her story on The Forgiveness Project’s website in September 2014, opened many doors for Madeleine in ways she never imagined and the invitations started to pour in.

She has taken part in both TV and radio interviews and has been invited to share her story at conferences, events and schools.

She recognises that she was a victim of a crime that left her silent for many years, but has now found her voice and intends to use it. Not just for her, but for so many who can’t find theirs yet.

She is married and lives in Glasgow with her husband, three daughters, her cat, Suki, and dog, Alfie. 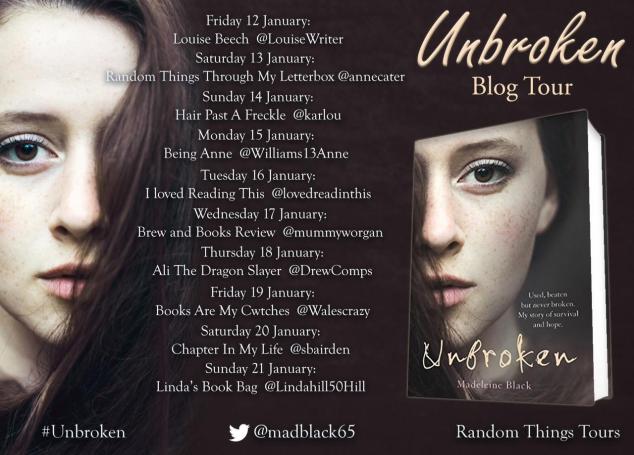 7 thoughts on “Unbroken by Madeleine Black”