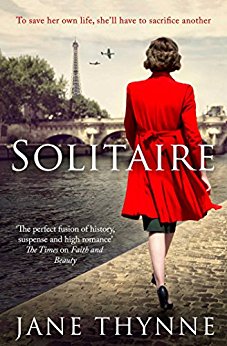 I know we shouldn’t judge a book by its cover, but Solitaire by Jane Thynne is so gorgeous that I’m thrilled to be part of this blog tour to support it. My thanks to Sian Divine for inviting me to take part and for my review copy of Solitaire which I’m saving up to read over Christmas.

It gives me great pleasure to find out a little more about the concept of Solitaire and its protagonist Clare Vine today. I’m doubly lucky as I have an extract to share as well as Jane’s super guest post.

Published by Simon and Schuster, Solitaire is available for purchase here.

To save her own life, will she sacrifice another?

June 1940: the first summer of the war. Berlin is being bombed and nightly blackouts suffocate the city. Then France falls and a shadow descends.

A shadow has fallen over Clara Vine’s own life, too. She is an Anglo-German woman in a country that hates England. Then she is summoned to meet the Propaganda minister, Joseph Goebbels, who has decided that Clara should adopt a new role – as his spy.

Much as she dislikes the idea, Clara realises this might be the chance to find an escape route to England. But Goebbels has other ideas and soon Clara is drawn into a web that threatens to destroy her. As everything she holds dear is taken as ransom, she must fight to protect her family – and to survive…

The Clare Vine and Solitaire Concept

I knew I wanted to write a spy thriller, and I was fascinated by WW2, but I always found Nazi Germany a very male story. I wanted to know about the women – mothers, wives, brides and schoolgirls – whose lives were tightly controlled under the regime. The Third Reich was extremely gender segregated – there was even a female Führer, called Gertrude Scholtz-Klink – yet these women get very little attention from historians and their lives are largely hidden, so I decided to use a spy to penetrate their world. My heroine, Clara Vine, is Anglo-German and an actress, because actresses are accustomed to playing a role, and trained to observe detail. Clara’s entire life in Berlin is an act, but her glamour blinds the Nazi VIPs to her real purpose. Her adventures start in Black Roses, which is set in 1933, just after Hitler has come to power in Germany. She arrives in Berlin at the age of 26, hoping to make a career at the famous Babelsberg studios, and by chance comes into contact with Magda Goebbels, wife of the Propaganda Minister, and becomes privy to the gossip of the VIP Nazi wives. Later, she agrees to relay information to British Intelligence, and thus becomes actress by day, spy by night. Although Clara herself is not modelled on any specific historical character, I read a lot of letters and diaries by young British women who had visited Germany before the war, and observed the build-up of Nazism. They came back and warned people about the rise of the Nazis, but their warnings fell on deaf ears.

Without spoiling the plot for readers, would you tell us about the storyline for Solitaire?

It’s 1940, and Germany is now at war with Britain, so Clara’s life is more perilous than ever. Unaware that she is a British agent, Joseph Goebbels, the Propaganda Minister, summons her to carry out a mission for him. The job takes her to neutral Lisbon, where a flood of refugees, aristocrats and spies has congregated, waiting to escape Nazi Europe. Among them are the Duke and Duchess of Windsor – and Ian Fleming.

What’s next for Clare Vine? How many books do you see her series carrying?

The next Clara Vine story is set in 1941, with locations in Vienna, Hamburg, Berlin and London. Clara is filming the most expensive Nazi movie ever made, called The Sinking of the Titanic, when she is presented with a daunting task, to track down a rogue British agent. The only problem is, this man was once her lover. I enjoy so much writing the Clara stories and being in her world, that I have no desire to stop. But I do have another protagonist who is longing to be written about, and she’s a rather different character, so I may start another series soon.

And what’s next for Jane Thynne?

My next novel is a standalone, provisionally titled The Typewriter. It’s a split time narrative set in the 1940s and the present day featuring two English sisters, Cordelia and Irene Capel, who are divided by ideology and war. Part of it is set during the fall of Berlin, when Russian soldiers rampaged through the city, raping every woman in sight. After the war Cordelia Capel becomes a Pulitzer prize-winning journalist, yet she is never able to confront the secret that has created a lifetime rift with her sister. At the time I was writing it, the Brexit debate was raging and the potential for ideology to divide families was all around. The family rift in this novel features spies, love and lies, and its repercussions stretch right into the present day.

Thanks so much for telling us a bit more about your writing Jane.

An Extract From Solitaire

In this extract from the prologue of Solitaire, a glamorous German nightclub singer is in Lisbon, waiting restlessly outside the casino at Estoril  for someone to emerge.

The night was rich and dark, dense as a wedding cake, and the sky powdered with stars. The young woman stood to one side of the casino’s pillared door, trying to remain inconspicuous as knots of people drifted through the glass doors and across the thick red carpet to the gaming room. Inside, chandeliers hung on gold painted ropes, bored croupiers raked the tables and a layer of cigar smoke was intercut by musky drifts of Chanel, Lanvin and Worth. The atmosphere was the same as in any casino the world over: joyless, thick with alcohol and moneyed voices. Occasionally the woman would venture out of the shadow and peer past the porters and bellboys, trying to catch a glimpse inside, but each time she hesitated and withdrew again, drawing her silk jacket closer around her. A black, strapless evening gown, decorated with silver faux-Chinese motifs, hung on her like a negligee and a single strand of pearls circled her neck. She had a gleaming drape of charcoal-coloured hair, eggshell skin, a soft pillow of lips, and a face that had broken a hundred hearts.

The night air raised goose bumps on her flesh and she braced herself, as though she could shrug off the shadows like a sable stole. On the opposite side of the square the red neon sign of the casino expanded and contracted like an artery and a short way away the shivering glitter of the sea was advancing and receding, tugging the shingle outwards to America and back to Europe again. Raucous laughter and the crash of bottles rattled from a nearby bar. The splayed branches of pine trees fractured the dark sky and as she stood there shivering, a momentary waft of resin transported her hundreds of miles, back to the pine-scented Grunewald of Berlin.

Berlin. Nothing about her life in that city could have predicted her presence here, all alone, in an unfamiliar town on the far westerly edge of Europe. Not the ranks of teachers at school or the marching and massed parades and gymnastics in the Tiergarten. Not the dancing and singing, nor the nightclubs, nor the stint at the Haus Vaterland, draped across a grand piano, trying to be Marlene Dietrich. At the thought of it she instinctively flexed a leg with the toe pointed and circled it slowly, as though she was warming up for a performance.

It was love that had brought her here. Damned, inconvenient love. She had always imagined herself immune, as though she’d had an injection against it, like you had for a disease. She prided herself on her indifference. Her heart was as hard as a Wehrmacht helmet. Melting eyes and tender protestations glanced off her like raindrops from the windshield of a pale blue Mercedes convertible, the kind she had always dreamed of owning. But somehow, love had undermined her defences and left her stranded here, three countries away from home, frozen, uncomfortable and very afraid.

She shivered again, shuffling toes that were growing slowly numb in her high heels, and tried to calculate the time. She was, in fact, perfectly used to high heels and late nights; back in Berlin, midnight was nothing. Usually, two o’clock in the morning was her favourite time, when everything slowed down and the harsh edges of the city relaxed. Often she would still be out at dawn, when the housewives first appeared at their doors, clutching their dressing gowns to their necks, looking for the milk cart. But on this particular night, the waiting was a strain.  A numbing exhaustion was seeping through her body, up from her legs, coaxing her into a waking doze, forcing her to shake herself awake. She wished yet again that she could find a cigarette, but smoking might draw unwelcome attention. Coffee would help, and the bar across the square was still open, its light fizzing over a few plastic tables, yet she dared not desert her post. Instead, she took out a chunk of chocolate and let it dissolve slowly on her tongue, staring restlessly at the casino from her vantage place in the shadows. It helped that her performer’s training had instilled a certain vigilance in her, a hypersensitivity to her surroundings, and she told herself that standing here was no different from waiting in the wings, poised to enter the stage for her moment of action.

Jane Thynne was born in Venezuela and educated in London. She graduated from Oxford University with a degree in English and joined the BBC as a journalist. She has also worked at The Sunday Times, The Daily Telegraph and The Independent, as well as for numerous British magazines.

She appears as a broadcaster on Radio 4. Jane is married to the writer Philip Kerr. They have three children and live in London.

5 thoughts on “Clare Vine and Solitaire Concept: A Guest Post by Jane Thynne, Author of Solitaire”