With two books out recently, from Zombie Cupcake Press, Lost Connections and The Place That Never Existed, I was fascinated to find out from author Jim Ody just how he managed to have two publications on the go at once. Huh! It wasn’t just two, as he explains in a guest post that made me tired just thinking about it.

The Place That Never Existed

For Paul and Debbie it was meant to be the happiest time of their lives. A small village wedding in front of their family and friends, followed by a quiet honeymoon in Devon.

Not everyone had been happy to see them together. A woman from their past refused to accept it. Her actions over the previous year had ended in tragedy, and had almost broken the happy couple apart.

Now, away from it all in a picturesque log cabin, Paul and Debbie look forward to time spent alone together… But she has found out where they are, and she will stop at nothing to make sure that the marriage is over… forever.

But Huntswood Cove isn’t just a beautiful Devonshire fishing town, it has its own secret. Recently, people have begun to disappear, only to turn up dead in suspicious circumstances. The locals begin to question what is going on.

Soon everything strange points to the abandoned house in the woods. The house that nobody wants to talk about. To them, it is the place that never existed. 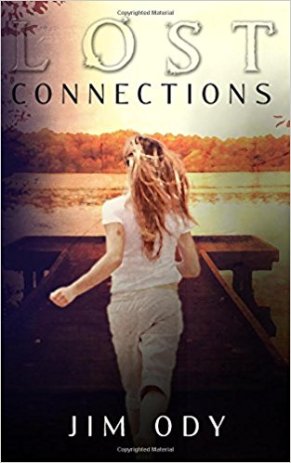 What would you do if the most important person to you had been kidnapped?

One minute your daughter is there, and the next she has been bundled into a van right under your nose. They want something of your father’s. You don’t know what that is, and your father mysteriously disappeared over 7 years ago. Going to the police is not an option. And the answers will slowly appear in the most unlikely of places.

As single-parent Eddie’s world falls apart, an unlikely alliance forms between friends and neighbours who put their differences aside to help get his daughter, Daisy, back.

As the mystery unfolds a huge secret is uncovered that not only will affect Eddie and his family, but the whole of mankind. Only the truth will set his daughter free…

Building Up A Momentum

I have always had a burning ambition to adorn a shelf or two of a bookcase with my own books. Having now re-released Lost Connections, and The Place That Never Existed, I know that it is important to keep the momentum going in order help build on a fan base and keep up the interest in my books. Only then can I not only fill up the aforementioned bookcase, but hopefully fill other people’s bookcases too!

A year ago I had just self-published both of these two books and whilst to the outside world it looks like I’ve not written anything new since, that couldn’t be further from the truth! This year I have written my next book A Cold Retreat, and this will be released for the first time in January 2018, and will be the third release by Zombie Cupcake Press. Aside from this I have also written six short stories and am putting the finishing touches to a novella. I am not one for writing short stories as I love the complexities that a novel allows me. However since submitting and having my short-story A Moth In The Jar published by Bloodhound Books in their Dark Minds anthology, I realised that this was something that I could write quickly and potentially reach a whole new audience.

My books are psychological/thrillers with twists that hopefully you won’t see coming, however my publisher is more romance/sci-fi/horror focused. This has suddenly opened my books to a whole new audience who have happily embraced my writing. This is why I jumped at the chance to write more short stories as you offer out bite-size chunks of literature to other people’s fans gaining more readership as you go. Next month my short story The Reveal will be release in an anthology called Madame Scarlet’s Carnival, a collection of six stories that include the same characters that all intertwine. And I have a sci-fi/comedy called Virgin Women in Outer Space which uses the same format of using one storyline to weave the individual stories around. The anthology is called Off Course and is released in February. The other four stories are all horror and will be released in two other anthologies sometime in 2018.

You have to understand that as an author I am surrounded by fantastic books and huge competition (although I feel us authors work together rather than against each other). Just like the music industry if you remain quiet and low key you can lose your followers in a flash. For me I find it best to put together a two year plan and work towards that. The goals are more of a guide, but they keep me focused on what I am trying to achieve. So my aim is to release one psychological/thriller a year that will now be slightly more serious, commercial and mainstream. To counter balance this I am about to start a series which will be more comedic. The first book is called …Just South of Heaven and was written about eighteen years ago. I will be re-writing it for a number of reasons including the improvement of my writing, and updating things like technological advancements and my humor. I then hope to release novella each year too which will allow me to explore different genres and push me out of my comfort zone. My current novella is called Beneath The Whispers and is a cross-genre tale of love in the dark corners of the mind.

Sitting in front of a laptop and spilling out words onto a screen is what most people consider to be the main, and often, the only work for an author. If only. Thankfully we have social media and I have embraced it as much as I can. As I have grown and gained a following I have felt the need to interact more with them. I have written two books for myself, and whilst A Cold Retreat was also written in the same vein, there were a few changes in what happened after the book was written. For a start I put together a launch team of about fifteen to twenty people who I could share the ideas of my book with. I had half a dozen BETA read for me, and the feedback received was invaluable. When I signed for my publisher the group grew and turned into my street team called Jim Ody’s Spooky Circus and currently there are about seventy selected members who get insights into my writing, giveaways, ARC’s and answer questions in polls to name my books, choose covers, pick story ideas etc.

Being an author can be a lonely occupation, but it doesn’t, and certainly shouldn’t need to be. Whilst I am by no means successful, I have learnt a lot throughout my journey and already I am trying to give that knowledge back through a Facebook group that I helped to put together. The point of it is to help out self-publishing authors by bringing together all of the services an author could need for free. The services and advice are offered free of charge by people either looking to gain experience, build a portfolio, or just give something back. These range from editors and proofreaders, to cover and web designers and bloggers.

I love writing and releasing books, so I want to continue improving my writing and eventually have a larger publisher release my work. And then, of course, there are the film rights for the adaptation…

(Crikey Jim! It sounds like you’re going to be busy!) 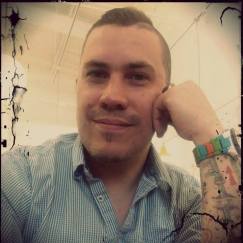 Jim was first published in an English School Textbook in 1987. He won a competition to draw a dog-walking machine. Having won an art competition the year before, he felt that at the age of eleven he had peaked and consequently retired from art.

For 10 years Jim wrote for a number of websites reviewing and interviewing bands in his own unique way, as well as contributing dark poems and comedic features.

Jim likes to write psychological/thrillers that have endings that you won’t see coming. He also favours stories packed with wit.

He has a very strange sense of humour and is often considered a little odd.  When not writing he will be found playing the drums, watching football and eating chocolate. He lives with his long-suffering wife and three beautiful children in Swindon, Wiltshire.

2 thoughts on “Building Up A Momentum: A Guest Post by Jim Ody, Author of The Place That Never Existed”