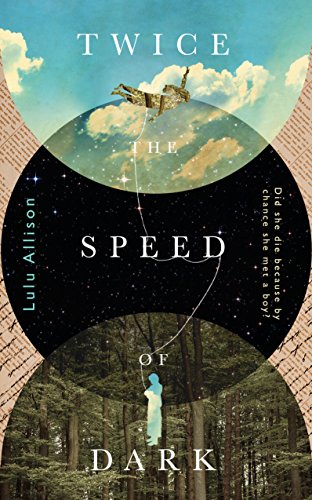 I’m delighted to be part of the launch celebrations for Twice the Speed of Dark by Lulu Allison, not least because I think it’s a fabulous title!

Published by Unbound on 24th November 2017, Twice the Speed of Dark is available for purchase in e-book and paperback here.

Twice the Speed of Dark 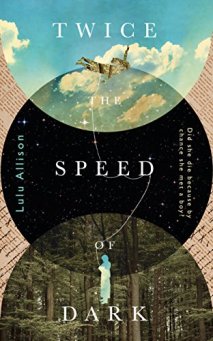 A mother and daughter circle each other, bound by love, separated by fatal violence.

Dismayed by the indifference she sees in the news to people who die in distant war and terror, Anna writes portraits of the victims, trying to understand the real impact of their deaths.

Meanwhile Anna’s daughter, killed by a violent boyfriend, tells her own story from the perplexing realms of death, reclaiming herself from the brutality.

Anna’s life is stifled by heartache; it is only through these acts of love for strangers that she allows herself an emotional connection to the world.

Can Anna free herself from the bondage of grief and find a connection to her daughter once more?

The Fascination of Death

Sometimes it has felt like Twice the Speed of Dark is a bit of a hard sell. The inevitable first question when I tell someone I am writing/funding/editing/promoting a book is ‘What is it about?’ If I were to answer with one word, that word would be death. Of the two main characters, Caitlin is dead, Anna, her mother, is grieving. The plot of the book relates entirely to those two circumstances. Furthermore, Anna scours the newspaper to find mention of fatalities from bomb blasts and terror attacks and writes portraits of unnamed dead people in the news stories in order to understand what their deaths might really mean.

Here is my work-around that gloomy pitch: The book is about death but it is, as a consequence, very much about life. And love.

Like many people when I was younger I was terrified of death – the death of loved ones, my own, the mere fact of it. My first method for overcoming fear was to define it as a long way off. To keep in contact with people. To reassure myself with statistics about the unlikeliness of X or Y demise. I was lucky not to lose anyone close to me; my grandparents died at a reasonable to good age. My sister suffered a life-threatening accident but recovered completely. My parents always came home after their nights out.

As I got older, I rationalised that there was no reason to worry about death because there were so many terrifying things that could happen, chances are I’d be worrying about the wrong one any way. I found ways not to look at the fear rather than over-come it.

As I got older, banishment became inadequate. In part because people do die; people I love very dearly have died far too young. There is no fairness or logic in their deaths, no system that can be seen to have been applied. Accident, fate, the betrayal of the body, a foolish action. All have caused deaths of people I love, long before their three score and ten. And even when deeply loved people die in their eighties, the enormous sense of loss is life-changing.

As a writer, I have to think about death because I think about it as a human. How could I not? It is one of the most stunning, mind-boggling aspects of life. And through these thoughts, eventually, a kind of peace can be found. Through a process that has been erratic, varied, sometimes dominated by emotion, sometimes by wonder, a process that does not have the measured calm, but has the regular application of a meditation, I have learnt that it is all right. Not, I must add swiftly, the loss of a loved one – this is difficult and can be utterly overwhelming. It seems to me that each bereavement must be met and dealt with anew, each time it is experienced, even when we might look to our shared experiences to find a way through. What I mean is the fact of death. It is all right because the life we have is so wonderful and that wonder is because it is switched on briefly. It is all right because to live forever would be appalling.

Even in the time I have had, I have grown weary of the mistakes, the political foolishness, the cruelty and stupidity of which our species is capable. I am fed up with how little we learn from history, how often our spite, fed by the frailty of our egos has led us to harm others. When will grown humans finally realise that if you hate someone for what they are, that hate is your own, however much incidental pain it causes? Never, sadly, is my answer. We will keep on being too clever by far, not smart enough by half; a mixture that can dream and aspire, that can love, cherish and care with such beautiful courage, and damage and destroy with such ease. I couldn’t stand an eternity of that.

I am not religious, but have developed a soothing sense of wonder in this acceptance. Life is such a blessing. Human life is, perhaps, a not entirely successful experiment and we may never learn to tame our destructive ways. But we thread the air around us with such wonders, such joys, and such hopes. I don’t imagine that rabbits sit on the slope of a grassy field, paralysed with terror or rapt with awe at that sure but uncertain knowledge of the void of space, the unfathomable lurch of eternity, the terrible finality of death. And maybe, because of that, being a rabbit would be easier. We humans do face that and somehow, we get on with our dreams, with our ambitions, with our caring and nurturing, with our loving.

We falter and fail, and take beautiful, defiant stands against that failure. It is why in Twice the Speed of Dark, Caitlin, the girl telling her story from death says “I long for the chance to face the eternal dark of death once more” because it is in facing it that we learn how blessedly alive we are.

(Thank you so much Lulu for such a wonderful guest post.) 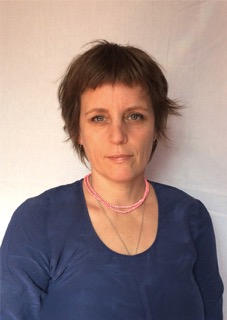 Lulu Allison has spent most of her life as a visual artist. She attended Central St Martin’s School of Art then spent a number of years travelling and living abroad. Amongst the bar-tending and cleaning jobs, highlights of these years include: in New Zealand, playing drums for King Loser and bass for Dimmer. In Germany, making spectacle hinges in a small factory and nearly designing the new Smurfs. In Amsterdam painting a landmark mural on a four storey squat. In Fiji and California, teaching scuba diving.

After a decade of wandering, she returned to the UK, where she had two children and focused on art. She completed a fine art MA and exhibited her lens-based work and site-specific installations in group and solo shows.

In 2013 what began as an art project took her into writing and she unexpectedly discovered what she should have been doing all along.

Twice the Speed of Dark is her first book. She is currently writing a second, called Wetlands. 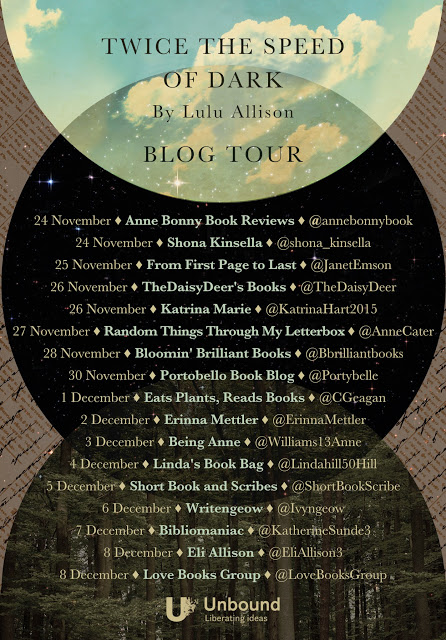 9 thoughts on “The Fascination of Death: A Guest Post by Lulu Allison, Author of Twice the Speed of Dark”