Those who know me well know that I have two ambitions – to write a novel and to study for a PhD (my husband has one so I don’t see why I should just stick with my Masters!). When I heard that Tracey Iceton had combined both my ambitions into one activity I couldn’t wait to be part of the blog tour for her latest book, Herself Alone in Orange Rain. I’m fascinated to hear from Tracey all about that process in a brilliant guest post today.

I’d like to thank publicist Karen Bultiauw for my copy of Herself Alone in Orange rain that I shall be reading very soon.

Herself Alone in Orange Rain is published by Cinnamon Press and is available for purchase here.

Herself Alone in Orange 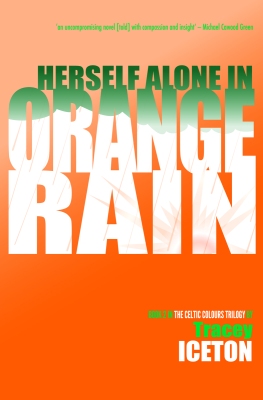 Kaylynne Ryan is a promising art student, used to fighting for her place in a world of men, but when a forgotten friend turns up she realises there is more than her own freedom at stake.

Learning the truth about her Irish heritage, her grandfather who fought all his life for Ireland’s independence, her parents who gave their lives for the same cause, she finds herself drawn into the dangerous world of the Provisional IRA with its bombing campaigns, bloody violence, hunger strikes and patriotic sacrifice. She didn’t look for the Troubles, but they found her nonetheless, and now, whatever the cost, she must join the cause to help rid the Six Counties of the Brits.

Herself Alone in Orange Rain tells the story of one young woman’s fight for freedom and independence, for her homeland and for herself.

Writing a novel as part of a PhD is a radically different process to just writing a novel.  I say this with certainty because my first novel, Green Dawn at St Enda’s was ‘just written’.  I knew what I wanted to do with it, did it, then my editor, the wonderful Jan Fortune at Cinnamon Press read it, told me how to make it better and I went away and did that too.  Simple.

When I got accepted on the creative writing PhD programme at Northumbria I was delighted; my studentship meant I was being paid to write my next novel!  At least that’s how I viewed it at first.  Over the three years of my doctorate I grew enormously as a writer, massively improving my craft and learning far more than even my English Studies honours degree taught me about fiction.  However, I didn’t ‘just write’ my second novel, Herself Alone in Orange Rain.

The process of a practice led PhD is that you write a section (once you’ve done enough research in your field of writing which is a pain for those of us who want to get down to being creative), give your supervisors it to read, meet with them, listen to what’s wrong with it and go home to put it right. It is agonising but worth it and my second novel is a mature, even sophisticated piece of writing, I feel, for this process, because I delved deeper in the mechanics of what I was writing and, more importantly, what I was writing against which I only realised through studying reams of Troubles fiction – fiction about the conflict in Ireland, which I didn’t even know was a genre until I starting the PhD!

To rewind a bit my Celtic Colours trilogy came about after visiting Kilmainham Gaol, Dublin.  Standing in the Stonebreaker’s Yard I learnt the story of the 1916 Easter Rising and was so fascinated by it that I knew I needed to write a novel based on it.  From the beginning my intention was for a trilogy; part one on the Easter Rising, part two on the 1970s/80s Troubles, part three on the situation in Ireland 100 years after the 1916 Rising.  I chose to write fiction because I believe fiction is an accessible, engaging form that invites readers into a world they wouldn’t be interested in exploring through non-fiction.  I was right in this belief because many readers of Green Dawn have commented on how much they learnt about British and Irish history by reading it, something that was a happy side-product of them picking up a novel, hoping to be entertained.

When it came to part two I assumed I would have a male protagonist; I planned to tell the story from the IRA perspective and, well, all IRA members are men, aren’t they?  But a friend, poet Natalie Scott, suggested exploring the woman’s point of view and it didn’t take much investigating to uncover two surprising things – women were active service IRA volunteers (they planted bombs and shot people) and their experiences were not realistically depicted in fiction.  This is where the PhD project took shape, giving me a solid research question: how do I write a novel that offers a credible, realistic portrayal of the experience of being and IRA woman?  In this I had a project I was passionate about.

Through my reading of Troubles fiction for the PhD I encountered female IRA protagonists who were shallow, heavily gendered stereotypes, even childish caricatures and never did I feel these fictional characters resembled or were believable as real women, which is characterisation lesson number one.  There was everything from bloodthirsty ice-maiden assassins to naïve little girlies bullied by male counter-parts.  It was depressing reading but spurred me on, despite the ego bruising of PhD supervision, to write the novel because I was desperate to challenge these misrepresentative fictional portrayals and give a real, genuine fictional voice to the life and experiences of the IRA women I found in my fact-finding research.

Whatever people make of Herself Alone in Orange Rain, I acknowledge it will be controversial for some readers, I stand by it because I know, having spent three years researching and writing it, that it does what no other novel I have found does: it uses the power of fiction to tell the true story of what it was like to be a young woman in the IRA in the 1980s. 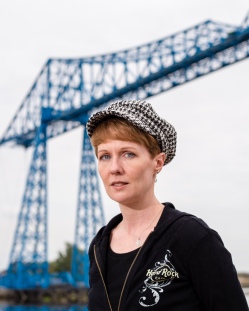 Tracey Iceton is an author and creative writing tutor from Teesside who recently completed a PhD in creative writing at Northumbria University. A qualified English teacher experienced in delivering creating writing courses and workshops, Tracey won the 2013 HISSAC short story prize for Butterfly Wings, was runner up in the 2013 and 2014 Cinnamon Press short story competitions with Slag and As the world (re)turns, which appear in the anthologies Journey Planner and Patria. She also won the 2011 Writers Block NE Home Tomorrow Short Story Competition and has been shortlisted for the 2012 Bristol Short Story Competition with Apple Shot and the 2015 Mslexia Women’s Short Story Competition for Ask Not. Green Dawn at St Enda’s, her debut novel and part one of her Irish Trilogy, was published by Cinnamon Press in 2016.

One thought on “Writing a PHD Novel: A Guest Post by Tracey Iceton, Author of Herself Alone in Orange Rain”