Regular visitors to Linda’s Book Bag will know that I adore travel as much as books. As well as visiting Uganda and India next year, I’m off to Indonesia in the hope of seeing Komodo dragons. When I heard that Diego Zapatero had not only devoted considerable time to the area but was producing a limited edition book and e-book of photographs, The Last Breath of the Prince – A Dying Art, with prints and other merchandise funded through Kickstarter, I had to ask him onto the blog to tell me more.

You can join in the Kickstarter campaign here and find out more about the book here.

The Last Breath of the Prince – A Dying Art 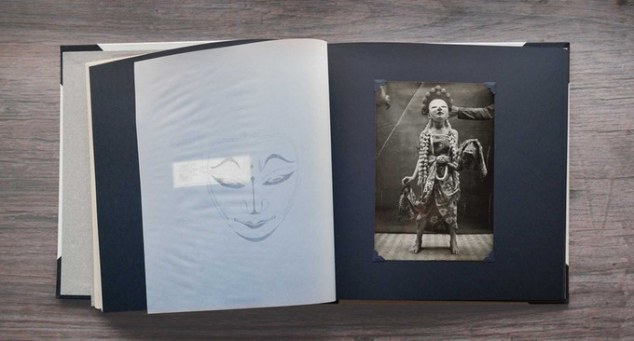 Nowadays, I think we are in a “decisive moment” as modernity, technology is reaching everywhere, often a process associated with loss of identity and traditions. In South Asia we are in a crucial moment where this loss is happening, unfortunately forcing the last opportunity to see something that will not be present any longer in the coming 10 or 20 years.

My passion for the masks started a long time ago, when I was I kid I was used to see all the material from my father’s expeditions into the Amazon, amongst them a big collection of the Yanomami tribe artefacts, blowpipes, arches and also including masks. First time I saw a “wayang topeng” (masked dance) performance was already 3 years ago, I took one of the most representative photos of my work. At that time I didn’t realize how complex this Javanese art really was.

With time I started a survey on the topic until I found a large collection of Dutch journals, ranging from the late 19th century to the early part of the 20th century. I came upon photos taken during the colonial period; in old studios with a technique modern photographers don not use anymore. That truly woke an inner feeling within, I had never come across such a thing in those days, and it convinced me that maybe it could be the right moment to start a project out of it. Concerning the topengs, I had already seen exhibitions of masks before, as a material thing, as a souvenir, but I thought why not pay tribute to those who are behind them? It is a universal issue, a performer loses his previous identity and assumes a new one, letting go of his own will, which now becomes subservient to that of the personage of the mask. Each time it is precisely then that something important occurs on stage.

On this occasion, the whole thing was closer to a movie shooting than a photographic one, from the design of theatre backgrounds based in old motifs, carpets, and the fact that I had to build a large tent structure with the villagers for the shooting. That was an amazing experience, sharing with them the real Javanese life, and feeling their inherent sense of hospitality. They were really enthusiastic and they highly appreciated the fact that a foreigner wanted to make such a big thing out of an almost extinct art. They understood very well and they were very collaborative at every crucial moment.

Masked dances in Malaysian Borneo had already disappeared, and it required a timely deep research from old books, as well as from museum materials. I was really lucky to find some of these dancers, from the Iban tribe in Sarawak, and the Bahau tribe in the Indonesian Borneo. This topeng project is more related to fine arts than previous ones, more personal, focusing on portraits, more than ever before. The reason behind it is that to get the feeling of old photos, I made a research, using the same techniques as the old photographers, and discovering how they managed the light was one of the keys. To create that specific feeling, most of the otherwise moving models were made to pose as required by the slow shutter speed.

The “Wayang Topeng” is a masked dance performance which lives on in Java, with roots and elements originating from an ancient, pre-Hindu creation myth, and retold in the 21st century in ever fewer rural villages in East and Central Java.

Sadly, the syncretism, once so characteristic of Javanese mysticism, is fading away rapidly in a modernizing Indonesia. The Panji mask dance is today still performed by small groups in the island. 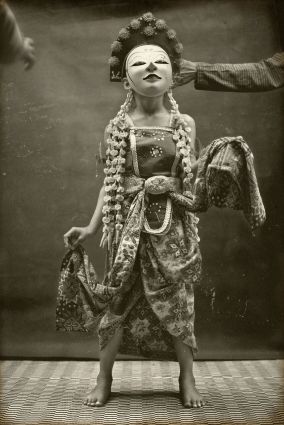 When the master of a craft or the keeper of the knowledge is gone, there is nothing but material traces and vague memories left behind, crumbling away with time; there is no way to recreate their deepest intangible history and state of existence.

It is already too late for hundreds, or more likely thousands, of such cultural manifestations around the world. For the few surviving traditions, the time is now to safeguard continuous evolution and interpretation of their ancient spiritual cultural heritage.

Diego Zapatero (1982) lives in the city of Yogyakarta, the cultural cradle of Indonesia. In his work he travels Southeast Asia to seek out the deepest and most genuine stories to substantiate his photo documentary projects.

While still in Spain, at the age of 25, he migrated into photographic work from a background as a pianist and composer after a career in marketing and business administration. He was led progressively towards his passion for cultural exploration; something inherited in his veins, at the same time pushed by a keen interest in Indonesian culture.

In 2010 he was sent from Spain on a two month mission to cover the eruption of the 9.600 feet tall Merapi Volcano on the island Java in Indonesia, one of the world s most active volcanoes. Zapatero has since taken an interest in the intangible about cultures in Asia.

Whether, through his projects, capturing a tattoo on a tribal body in remote parts of Borneo or a traditional dance character in full paraphernalia in densely populated Java, there is more to his photos than meets the eye at first glimpse.

Many manifestations of cultural heritage needs to be put and seen in the light of sometimes thousands of years of continuous evolution, interpretation and reinterpretation, as to even remotely fathom the depth of the characters and their current appearance.