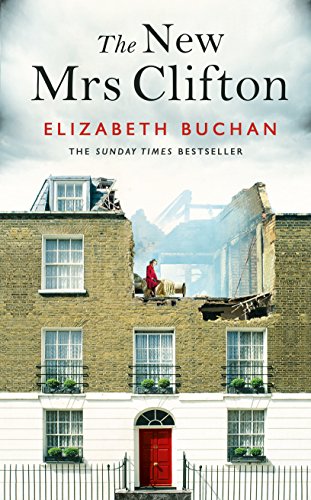 Published by Penguin on 11th August 2017, The New Mrs Clifton is available for purchase here.

‘Wrapped in the roots of the sycamore was a skeleton; the remains of a woman, between twenty-five and thirty. She had carried a child . . .’

At the close of the Second World War, Intelligence Officer Gus Clifton returns to London. On his arm is Krista, the German wife he married secretly in Berlin. For his sisters, this broken woman is nothing more than the enemy. For Nella, Gus’s loyal fiancée, it is a terrible betrayal. These three friends wonder what hold Krista has over decent, honourable Gus. And, they ask themselves, how far will they have to go to permanently get her out of their home, their future, their England?

An Interview with Elizabeth Buchan

Welcome to Linda’s Book Bag, Elizabeth. Thank you so much for agreeing to answer some questions on my blog about your writing and The New Mrs Clifton in particular. Firstly, please could you tell us a little about yourself?

Thank you so much for inviting me. I’ve spent my life with my head in a book – as a child I was often caught reading with a torch under the blankets late into the night. Before I embarked on the novels, I worked in publishing at Penguin Books and was briefly a fiction editor but the siren call of writing was too strong and I left to write my own books. Fifteen novels in, I am about to embark on the latest.  I live in London and my family all live close by which is wonderful.

Without spoiling the plot, could you tell us a bit about The New Mrs Clifton?

Intelligence officer, Gus Clifton, returns from Berlin in 1945 bringing with him a new bride. To the horror of his two sisters, and the bewilderment of his ex-fiancée who was fondly waiting to marry him on his return, she is German. Why has he done this? The answer can be found in the upheaval and violence of war, even on a home front. Nice people do terrible things in this situation and the will to survive is stronger than anything else. Both Gus and Krista find they run up against aspects of themselves which shocks them.

The New Mrs Clifton is set in post war London as well as Berlin. How did you ensure the settings and detail felt authentic?

I got hold of every book on the subject I could lay hands on, including memoirs of the time. They are invaluable for supplying the little telling details, such as the impossibility of getting hold of soap, shampoo and paint even after the fighting stopped. I looked at old photographs and – my greatest coup – I managed to get hold of a second-hand copy of the original bomb maps published by the Greater London council which shows where every bomb fell, what type it was and the extent of the damage it inflicted.  Gold dust.

The marriage between Krista and Gus sees two seemingly conflicting cultures joined together. How important is it to explore the question of culture and expectation through fiction?

I think that is precisely what a novel can do and should do.  Imaginative empathy often goes beyond the historian’s facts.  If one can invite a reader into thinking, sensing and feeling a character’s predicament and their setting then the novelist is doing the best job possible to open up worlds.

Which character do you identify most with from The New Mrs Clifton, and why?

I love my Krista. I feel for her isolation and terror and admire her determination to become normal.

Thank you so much for your time in answering my questions.

My Review of The New Mrs Clifton

A body is found in the garden when a new couple move in – but to whom does it belong?

I found The New Mrs Clifton a mesmerising read and one that frequently made me very uncomfortable because so much of it is based on past horrific experiences and I wondered just how I might have behaved and acted in similar ones. I think one of the great successes of the story is that Elizabeth Buchan makes the reader think and question their beliefs and certainties. I had a far better understanding of the effects of WW2 on the ordinary person after the war than I had really had before and reading the book made me glad I was born well afterwards. The uncovering of inherent racism, corruption and manipulation at all levels is totally convincing.

The narrative style was just as good as I hoped and expected from an Elizabeth Buchan novel. There’s an intensity and claustrophobia that is palpable and much of the effect comes as much from what isn’t said as what is so that I experienced the same responses and emotions as the characters. The three main women, Krista, Julia and Tilly, are magnificent creations so that each was very real. I understood their frailties, desires and fears completely. Despite Kritsa’s displacement and the fact that she deserves the reader sympathy, it was Julia I felt most for. She begins as an odious individual but by the end of the novel she had my complete understanding and I felt almost as sorry for her as for Krista.

I loved the plot. The way Elizabeth Buchan drops in the tiny daily details that enhance setting or our understanding of her characters’ emotions to her ability to present the most startling information with a pared down sentence that shocks the reader makes her writing incredibly satisfying to read. Towards the end I found my heart rate increased dramatically as I headed to a knowledge of whose body was in the garden.

The New Mrs Clifton is an intelligent, and unsettling, book that makes the reader wonder just what they themselves might be capable of in extreme circumstances. I won’t forget it in a very long while.

Elizabeth Buchan began her career as a blurb writer at Penguin Books after graduating from the University of Kent with a double degree in English and History. She moved on to become a fiction editor at Random House before leaving to write full time. Her novels include the prizewinning Consider the Lily, Revenge of the Middle-Aged Woman, The Second Wife, Separate Beds, and Daughters. After talking to some amazing women who had been employed by SOE, she wrote the Danish wartime resistance story, I Can’t Begin to Tell You. The New Mrs Clifton, is based on a situation that happened in her own family after the war – only in reverse.

Elizabeth Buchan’s short stories are broadcast on BBC Radio 4 and published in magazines. She reviews for the Sunday Times and the Daily Mail, and has chaired the Betty Trask and Desmond Elliot literary prizes. She was a judge for the Whitbread First Novel Award and for the 2014 Costa Novel Award . She is a patron of the Guildford Book Festival and of The National Academy of Writing, and sits on the author committee for The Reading Agency.

3 thoughts on “The New Mrs Clifton by Elizabeth Buchan”