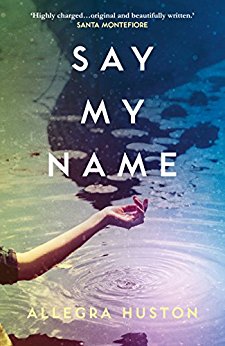 I’m delighted to be part of the launch celebrations for Say My Name by Allegra Huston with an extract from the book and a (UK only I’m afraid) hardback giveaway that you can enter at the bottom of this blog post.

Published by HQ, an imprint of Harper Collins, on 27th July, Say My Name is available for purchase through the publisher links here.

‘This is the time to run away, she thinks, to call it a mistake, to race back to home and safety. If I don’t go home I will never feel safe again.’

On meeting Micajah Burnett, the son of an old school friend, Eve Armanton is faced with a choice. Years of a miserable marriage means she’s as broken as the beautiful antique violin she’s just found, and Micajah offers a spark of life, an opportunity to reawaken her sense.

If Eve takes a leap into this new world, she’ll be leaving behind her old self for good. Her happiness depends on forging a new life, but at the end of her journey who will Eve have become?

An Extract from Say My Name

There, under a table heaped with china of the sort nobody uses anymore, she spots it, almost hidden behind random objects carrying price stickers faded by time. Daylight filters through grimy windows onto worn green velvet, golden wood. Strangely, the case is open—as if it’s hoping to be found.

It’s bigger than a violin, much smaller than a cello. It’s fat, squarer than most instruments of its kind, with an elongated neck, and—this is what draws Eve in—encrusted with vines. The fragile carvings seem greener. They were once painted, maybe.

Eve moves the piles of junk aside so that she can crawl under the table. Usually she wears jeans for these expeditions, but it’s a hot New York summer, so this morning she chose a thin dress, counting on the intricate print to disguise any smudges. It will rip easily, though, so she tucks up the sides into her underwear to keep it off the floor.

As she crouches down, the bones of her knees crack. Though she’s fit and strong, her forty-eight-year-old body is starting to show age. Her brown hair has almost no gray in it—good genes, her mother would have said—but soon she’ll have to decide whether to color it. She’s never seen the point of lying about her age and, being married, she’s less concerned about looking young than she might be if she were single. Still, the ugly milestone looms. She’s tied her hair in a ponytail and covered her head with a scarf to protect against cobwebs.

By profession, Eve is a garden designer. Her husband, Larry, makes enough as a product development manager for a pill-coating supplier to pharmaceutical companies to enable him to treat her little business as, basically, a hobby. This annoys her, but the truth is, she treats it that way too. Taking it more seriously would mean confronting Larry and claiming ownership of her time and priorities, which she is not prepared to do. The status quo feels fragile, although it also feels as lasting as mortal life allows. All that’s required is that she keep the delicate political balance, and doesn’t rock the boat or disturb the sleeping dogs. She’s gotten into the habit of not pushing any communication past the minimum required for practical matters and the appearance of enough closeness to assure her that their marriage is sound.

On weekends, guiltless and free, she searches out treasures for her friend Deborah’s antique shop. Larry doesn’t com- plain; she suspects he’s glad to have the house to himself. For her part, she’s glad to be away from it. The strange objects she finds ignite her imagination, conjuring up lives more exciting, and more terrifying, than the low-intensity safety of her own. Today she’s exploring a northerly part of New York City that, like a tidal pool left by successive immigrant waves, houses people from nations that may or may not still exist: Assyrians, Armenians, Macedonians, Baluchistanis. The alphabets in which the signs are written change block by block. Neighborhoods like this are her favorite hunting grounds.

On her hands and knees under the table, she tugs at the instrument in its case. It shifts with a jerk, leaving a hard outline of oily dust on the floor. Probably it hasn’t been moved in years. She lifts it up onto a tin chest, keeping her back to the storekeeper to disguise her interest.

The vines twine over the body of the instrument and up its neck, stretching out into the air. Though the delicacy of the carving is almost elfin, it has the strength of vines: blindly reaching, defying gravity. The tendrils are dotted with small flowers: jasmine, so accurately rendered that Eve identifies them instantly. A flap of velvet in the lid conceals a bow, held in place by ribbons. It, too, is twined with curling vines.

She wiggles her fingers into the gaps between the instru- ment and the velvet lining, prying it loose. A moth flies out into her face and disappears in the slanting shafts of light.

Holding it by the neck, she senses another shape. With spit and the hem of her dress, she cleans away the dust. There’s a pudgy, babyish face, the vines tightening their weave across its eyes. Cupid, blinded by love.

Eve pinches up dust from the floor to dirty the face again. She has learned not to improve the appearance of things until after the bargaining is done and the money has changed hands. Then she turns the instrument over.

The back is in splinters.

Eve touches her finger to the ragged shards of wood, long- ing to make this beautiful thing whole again. The damage must have been deliberate: an accident would have broken off the vines. What drove that person over the brink? Musician’s frustration? Rage at fate? Heartbreak? She can almost feel remnants of the emotion stuck to the gash, like specks of dried blood.

If she had it repaired, the cost would almost certainly be more than the instrument is worth. And even an expert might not be able to restore it completely. It could serve as a decorative item, but only if the gash stays hidden. Deborah won’t want it—she has a rule against broken things. Also, she feels more comfortable with things that have names, like bowls and vases and candlesticks. Passionless things that sit prettily in nice rooms. The history that this object bears on its back would freak her out.

Eve moves to return the instrument to its exile, but she can’t bring herself to do it. Now that she has touched it, she cannot push it back into the shadows.

Allegra Huston has written screenplays, journalism, and one previous book, Love Child: A Memoir of Family Lost and Found. After an early career in UK publishing, including four years as Editorial Director of Weidenfeld & Nicolson, she joined the film company Pathé as development consultant. She wrote and produced the award-winning short film Good Luck, Mr. Gorski, and is on the editorial staff of the international art and culture magazine Garage. She lives in Taos, New Mexico, with her 14-year-old son.

For your chance to win one of three hardback copies of Say My Name by Allegra Huston, click here. UK only I’m afraid, Giveaway entries close at UK midnight on Tuesday 1st August 2017.