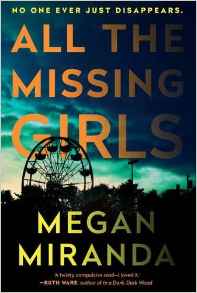 As All The Missing Girls has a structure working backwards, I’m both stop 2 and day 14 in the celebrations!

To celebrate publication of All The Missing Girls, Megan has kindly agreed to be interviewed.

All the Missing Girls 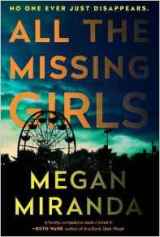 It’s been ten years since Nicolette Farrell left her rural hometown after her best friend, Corinne, disappeared without trace. Then a letter from her father arrives – ‘I need to talk to you. That girl. I saw that girl.’ Has her father’s dementia worsened, or has he really seen Corinne?

Returning home, Nicolette must finally face what happened on that terrible night all those years ago. Then, another young woman goes missing, almost to the day of the anniversary of when Corinne vanished. And like ten years ago, the whole town is a suspect.

Told backwards – Day 15 to Day 1 – Nicolette works to unravel the truth, revealing shocking secrets about her friends, her family, and what really happened to Corinne. Like nothing you’ve ever read before, All the Missing Girls is a brilliantly plotted debut thriller that will leave you breathless.

An Interview with Megan Miranda

Welcome to Linda’s Book Bag Megan. Thank you so much for agreeing to answer some questions on my blog about your writing. Firstly, please could you tell me a little about yourself?

Thank you so much for having me! A little about me: I’ve had a few different careers on my way to becoming a writer. First, I worked in biotech; then, as a high school science teacher. I now live in North Carolina with my family, and I love suspense and thrillers—both reading and writing.

Without spoiling the plot, please could you tell us a bit about All The Missing Girls?

Sure! Two young women have gone missing ten years apart, and their cases are linked by the same group of friends in a small North Carolina town. And it’s told backward, from Day 15 to Day 1.

I had always loved reading and writing, but I didn’t take the steps to try and make writing my career until after I’d worked at a few different careers and had young children at home. My youngest had just turned one when I set myself the goal of finishing my first book.

I love beginnings. The process of discovering the characters and the setting is the most fun for me, and because of that, it’s the easiest part. Plotting out the story, though, is the most difficult for me. I have to write my way pretty far into a draft before I figure out what’s going to happen.

I work fairly structured hours, writing when my kids are at school. I do most of my writing in my home office, though if I’m stuck, I will try a change of scenery.

All The Missing Girls is unusual as it is plotted backwards. How did you manage the plotting of the narrative?

Honestly, it was a lot of trial and error. I don’t outline much before I start writing. I find I need to write my way into stories as I discover the characters. But I used a program called Scrivener, which allowed me to write in separate scenes and keep notes and lists for myself as I went. It was a constantly evolving draft, changing every time I’d discover a new element. So it mostly came down to a lot of revising.

There are fascinating quotations at the start of each part. How did those quotations arise?

Time was a theme I was interested in exploring in the story—the way we view the past, how the past defines us, if we can look back in time and see things with a different understanding. Since Nic’s father taught philosophy and would pull on this material in her childhood memories, I wanted to choose quotes from philosophers about time to help define each section.

All The Missing Girls marks a departure from your other Young Adult fiction. Why did you decide to write for a more mature audience this time?

In my young adult books, I had been writing about these big events that significantly affected the main characters in their teen years. Later, I got to thinking about how these events might ultimately shape the people they become. Whether they moved past these events; whether they tried to forget them; whether these events were inescapable. Thinking about this gave rise to the idea for All the Missing Girls. It felt like a natural transition since I was still writing about a big event that happened when the characters were teenagers. But this time I was exploring what happened ten years later, who they all became because of it, and whether the past would ever let them go.

When I started writing, I pulled on my science background to inspire my young adult ideas. Now, I find story ideas everywhere. Sometimes the setting gives rise to a story. Sometimes, it’s a character or a theme.

I know you have a background in Biology. How did this help in writing a psychological thriller?

I think my science background helped me during the revision process. I approached the structure a little like an experiment, stepping back and analysing what was working and what wasn’t with each draft.

There are some interesting themes in All The Missing Girls from dementia to family to truth and love. How aware were you of these themes as you wrote?

There are some themes I set out to explore at the start of a book (for example, I knew I wanted to explore the idea of the different ways people can disappear: literally, figuratively, and whether the other, older versions of ourselves still exist inside). But other themes arise more naturally from the plot as I write. I see themes as ideas to explore, and there are some I circle around on purpose, and some that the story brings to the surface on its own.

Trees and woods play an important role in All The Missing Girls. How far do you think those settings ‘speak’ to our primeval instincts?

How did you create the setting of Cooley Ridge?

Cooley Ridge is a fictional town inspired by elements of several different places from my memory. I wrote the first words when I was staying at the edge of the forest in western North Carolina, letting the setting of mountains and woods speak to me. The caverns came from a memory I had from when I was younger, in a different state. We were on a tour of some caverns, and the lights were turned off to show us total darkness. It’s a memory that has stayed with me ever since.

To what extent do you think all small communities have secrets and lies as in Cooley Ridge?

I think there are two sides to a small community like Cooley Ridge: That it can feel inescapable to someone who’s grown up there, with everyone knowing everything about you, seeing you a certain way. But that it can also be the type of place to rally around you in a crisis, and to keep your secrets. I’m not sure if all small communities are like that, but I chose to set the book in a town like this for that reason; that I felt it was the type of place that would keep its own secrets.

The cover of All The Missing Girls has a Ferris wheel that suggests the cyclical nature of events to me and history repeating itself. How did that image come about and what were you hoping to convey (without spoiling the plot please!)?

I originally incorporated a Ferris wheel into the story because, while I love amusement park rides, I’m terrified of Ferris wheels. I remember being on one when I was younger, and the people I was with were rocking the cart back and forth while we were stuck at the top. So it felt like something I could really pull on when I was writing that scene, from their past. Then it became the central moment of the story, that set everything in motion, and the story kept circling back to that image—so I love that the Ferris wheel made it onto the cover.

Your next adult novel The Perfect Stranger will be out soon too. What can we expect in this new book?

It’s another psychological thriller, this time about two women who reconnect years after they were roommates, both in desperate need of a fresh start. They relocate together, but when one goes missing, there’s no evidence she was ever there to begin with.

And finally, when you’re not writing, what do you like to read?

I read pretty widely, but my favourite genre is suspense/thrillers.

Thank you so much, Megan, for your time in answering my questions.

Thanks so much for having me! 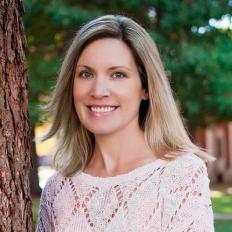 Megan Miranda is the author of the national bestseller All the Missing Girls. She has also written several books for young adults, including Fracture, Hysteria, Vengeance, Soulprint, and The Safest Lies. She grew up in New Jersey, attended Massachusetts Institute of Technology, and lives in North Carolina with her husband and two children. Her next novel for adults, The Perfect Stranger, will be published by Simon & Schuster in April, 2017 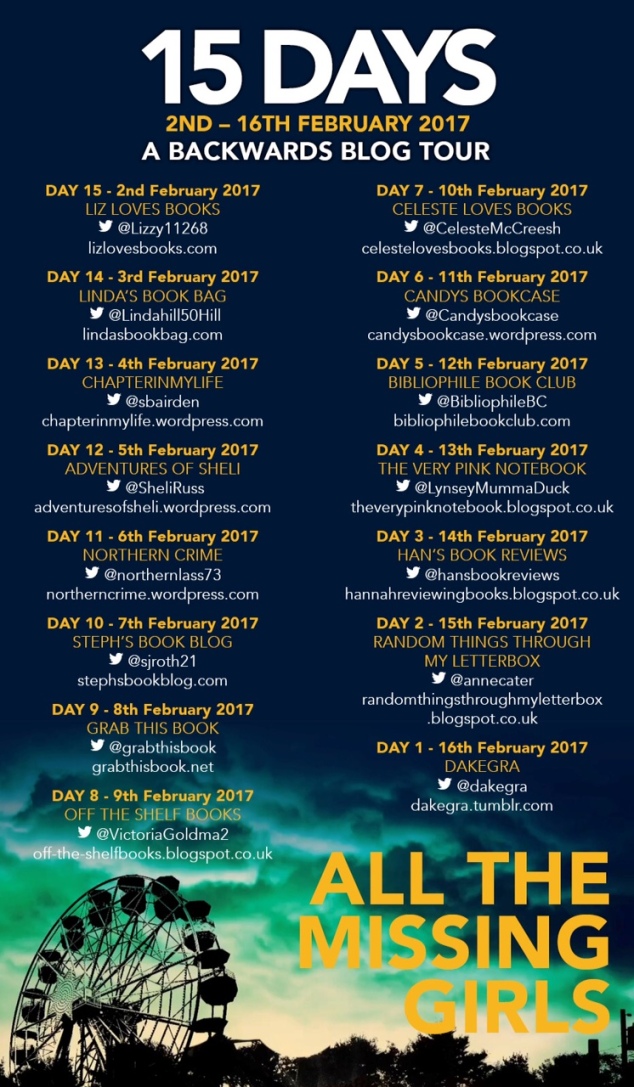 One thought on “An Interview with Megan Miranda, Author of All the Missing Girls”