It gives me great pleasure to welcome Ross Sayers, author of Mary’s The Name to Linda’s Book Bag. Mary’s The Name is published by Cranachan today, 30th January 2017, and is available for purchase in e-book and paperback here.

Not only am I reviewing Mary’s The Name, but I am really pleased to have a guest post from Ross about writing with humour too.

“When me and Granpa watched James Bond films, he told me not to be scared because people didn’t have guns like that in Scotland. That must’ve been why the robbers used hammers.”

Orphaned Mary lives with her granpa, but after he is mixed up in a robbery at the bookies where he works, they flee to the Isle of Skye. Gradually, Mary realises that her granpa is involved. And the robbers are coming after him–and their money.

Mary’s quirky outlook on life, loss, and her love of all things Elvis, will capture your heart. Full of witty Scots banter, Mary’s the Name will have you reaching for the hankies, first with laughter, then with tears.

Heart-warming and heart-breaking, this darkly comic debut is from a fresh voice set to become Scotland’s answer to Roddy Doyle.

A couple of years ago, at a magazine launch, I read out a story about schoolboys dancing with girls from another school, and I was so pleased with the reaction. At points I had to stop to wait for the laughter of the audience to subside. Later, at another spoken word event, I read a more sombre story, one which didn’t raise many smiles. I knew which performance I preferred. I’m not saying I think I’ll bring the house down with every performance of Mary’s the Name, but I enjoy writing and performing so much more if I can be animated and try to make the audience laugh. It isn’t in my nature to write without trying to crack a few jokes.

Most readers will know this, but the writer doesn’t decide what goes on the back cover of the book. Cranachan described Mary’s the Name as ‘darkly comic’, which admittedly I hadn’t really thought about. I imagine it’s because, while some bleak things are happening in the story, I do my best to keep the reader smiling. This isn’t a deliberate choice on my end, I just think that’s how life is. I’m sure everyone out there has experienced some bleak moments of their own in life. Wasn’t there someone (maybe even you!) cracking a terrible joke at an inappropriate moment, keeping everyone going? I think Joss Whedon said it best: ‘Make it dark, make it grim, make it tough, but then, for the love of God, tell a joke.’ Couldn’t agree more with Mr Whedon.

I think Scottish people will particularly relate to the story, as hopefully they will recognise the kind of banter they have with their friends and family. If I were to pinpoint one key aspect of Scottish humour, it would be this: if we think you’re taking yourself too seriously, we’re very happy to slag you rotten. And they more we like you, the worse the slagging will be! (Although perhaps this is more of a British thing, having been raised on Only Fools and Horses, The Royle Family, Red Dwarf etc.)

A lot of the humour in the story comes from Mary herself. As a child, although she’s clever, there are things she gets wrong and doesn’t understand. This childhood innocence is a great way to stop the darker events of the book becoming too dark. My main aim was to entertain, not to depress my readers!

So if you’re looking for a book with humour as well as heart, I hope you’ll give Mary’s the Name a try!

(I have Ross and I loved the humour!)

My Review of Mary’s The Name

Eight year old orphan Mary lives with her Granpa, but when he’s involved in a robbery at the bookies where he works, life is about to change.

What a glorious creation Mary is! Ross Sayers has depicted childhood innocence in Mary coupled with a wisdom beyond her 8 years so that we have an individual it is impossible not to love. In essence, Mary’s The Name is about what it means to be a child growing up and making your way in the world. There’s a feistiness of character along with Mary’s attention to detail and the truth, her love of Elvis’s music and James Bond films and her pride in her bronze swimming certificate that makes her a delight to read about.

When books are described as humorous I’m usually disappointed, but I laughed aloud several times at Mary’s The Name, especially at the almost theatrical asides in italics. Those comments distilled so many typical sayings and aphorisms that I could hear them reverberating from my past and the very fabric of my upbringing. I found Ross Sayers used accent and dialect perfectly too so that there was an added layer of amusement. There was just enough to add colour to the direct speech without alienating the reader.

Mary’s The Name is an easy read because it is delightfully and charmingly written, but that is not to say it is lightweight. As well as the humour there is sadness and a wide range of emotions. Underlying themes are serious and thought provoking. Violence, childhood bullying, friendships, relationships, loneliness, theft and dishonesty and so on, all add depth and layers that make this tightly constructed plot so appealing.

I thoroughly enjoyed Mary’s The Name because of the freshness and vitality of Ross Sayers’ style. I think he is a talented writer who deserves to go far.

Ross studied English in his hometown of Stirling. Not content with the one graduation, he completed a Masters in Creative Writing the following year. His stories and poems have featured in magazines such as Octavius and Quotidian. Ross also tried his hand at acting in the university’s Drama Society, which gave him valuable life experience at being an extra with no lines.

One of his short stories, Dancin’, was used on West College Scotland’s Higher English course. He only found out after a student tweeted him requesting a copy of the story so she could finish her essay.

Ross mainly reads contemporary and literary fiction, and loves it when a writer remembers to include an interesting plot. He heartily endorses not finishing books which bore you.

While researching Mary’s the Name in Portree, gift shop employees excitedly mistook him for Daniel Radcliffe; Ross had to burst their bubble. But at a football match in London, he agreed to have his photo taken with a wee boy, who believed he was Harry Potter, to save any tears or tantrums. 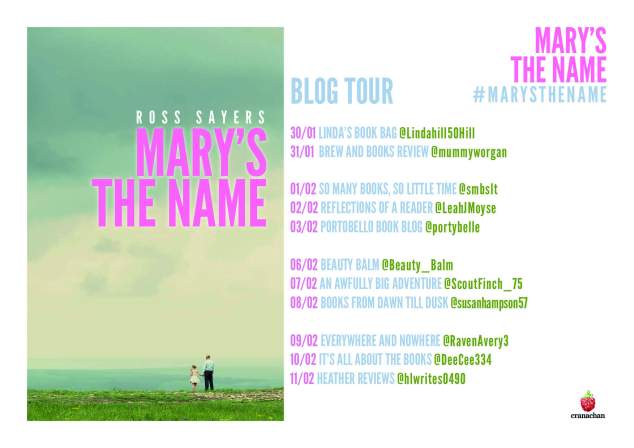 8 thoughts on “Writing with Humour, a Guest Post by Ross Sayers, author of Mary’s The Name”