I’m delighted to be part of the launch celebrations for Uncoiled Lies by Liz Mistry. Part of the DI Gus McGuire series, Uncoiled Lies was published by Bloodhound on 26th January 2017 and is available for purchase here.

Today I have an extract from Uncoiled Lies for you to enjoy. 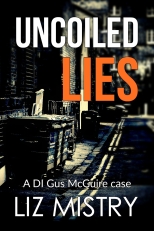 Murder. Love. Corruption. DI Angus McGuire and the team are back and have their work cut out.

Murdered prostitutes and a turf war between local gangsters takes the investigation into Bradford’s Immigrant communities where tensions run high.

To make matters worse McGuire is juggling an illicit relationship with his boss’s daughter and has fraught family relations.

Who is The Old Man?

What is the link between three dead prostitutes and a long forgotten murder?

Will McGuire and his team get the answers they want or is the uncomfortable truth much closer to home?

An Extract from Uncoiled Lies

Angular but stooped, Bazza ‘The Bampot’ Green was of average height. He was in his fifties and bald and grey in equal measure. When he smiled, Alice noticed that his few remaining teeth were brown and jagged. His fingers were yellow as he beckoned them through and even from this distance she could smell his BO which vied with the smoke and grease that seemed to burst from the flat in a fetid cloud of filth.

With an exaggerated bow, he gestured for them to enter. Alice, wishing she’d thought to wear her old anorak rather than her new winter coat, marched in after him, her face impassive. The heavy, smoke-filled air and the fact that Bazza had already discarded one cigarette and lit up another confirmed Alice’s impression of a chain smoker. A wave of pity for Trixie rolled over her. Was it really worth the free rent to bed this disgusting creature?

Once in the small living room, Bazza gestured to a stained sofa and, whilst Sampson took advantage of the offer, Alice shook her head, wary of contaminating her clothing any more than was absolutely necessary. She began to wander idly round the room, taking in her surroundings. The conglomeration of cheap knick-knacks combined with the peeling, yellowing flock wallpaper and faded floral three-piece suite told her that Bazza hadn’t done any decorating since his mother died a few years previously. She wandered over and stood in front of the gas fire that was on full burn. ‘You heard about Trixie then, Bazza?’ she asked.

Bazza sighed. ‘Yes, very sad. One of your delightful little PC’s came with the news in the early hours of this morning.’ He shook his head. ‘Very sad indeed. A little cracker she was. Amenable.’ He glanced at Sampson and winked, ‘in every way.’

By the time he’d glanced over to her to gauge her reaction, Alice had banished the disgust from her face, replacing it with a disinterested expression as she walked over to the heavy wood sideboard that ran along the back wall behind Bazza’s chair. Objectionable little scrote, she thought taking a deep breath which she immediately regretted when smoke clogged her throat, making her cough. Damned if I’ll ask him for a glass of water, I’d rather choke to death than risk consuming anything in here. She waved a hand at Sampson telling him to take over, until she’d recovered.

Bazza leaned back in his chair and flicked ash towards an overfilled ashtray. For a moment, he craned his neck to observe Alice who, having recovered from her coughing fit, was looking at the collection of tat on the sideboard. With a shrug he brought his attention back to Sampson. ‘No, not heartbroken. That would be a bit too strong a word. More like… dissatisfied.’

‘What do you mean?’ asked Alice, standing directly behind him, forcing him to strain to see her.

‘She’s a business asset or, rather, she was. Now, she’s a loss. Causes me a lot of hassle you know? Finding a new girl and all that.’

‘You know pimping is illegal, don’t you, Bazza?’ said Alice, lifting a dirty ornament off the sideboard and looking at the ‘made in China’ label on the underside, ‘Nice stuff you’ve got here.’

‘Now, there’s no need to be nasty. I’m co-operating because I don’t like murder. I’m not a pimp. No. The girls come to me to be looked after and that’s what I do. Look at the flat I gave Trixie and Jessica. Rent free it was, though of course I’ll have to reconsider that now.’

Bazza lit another cigarette, threw back his head, and laughed. ‘Now, you’ve got that wrong son. Trix and me, well, we had a relationship. I treated her right. Took her to my penthouse, bought champagne and such like and we enjoyed ourselves.’

Alice muffled a laugh that had Bazza whirling round in his chair, ash flying from his cigarette as he moved. ‘That’s not the word on the street, Bazza. Word is that you got the enjoyment and she anaesthetised herself on the free booze to get through it.’

He screwed up his face and turned back to Sampson. ‘She’s got a nasty tongue in her mouth, that one.’

Liz Mistry is a crime writer based in Bradford but originally from West Calder in Scotland. She studied at Stirling University and taught in Bradford inner-city Primary schools for many years. Liz writes gritty crime fiction drawing on the richness of Bradford’s diverse cultures and her writing is heavily influenced by Tartan Noir writers such as, Stuart MacBride, Ian Rankin and Val McDermid. Unquiet Souls was her debut novel and she looks forward to writing many more featuring her main character DI Gus (Angus) McGuire and his team, with Uncoiled Lies out now.