Those of you who know Linda’s Book Bag well will also know that I love to travel as much as to read (and if I can do both together so much the better). Next on my travel wishlist is India so I’m delighted to welcome Dianne Noble to the blog today. Dianne’s latest book A Hundred Hands is set in India and she has agreed to tell me a little more about the country as a means of inspiration.

A Hundred Hands will be published on 1st November 2016 and is available for pre-order until publication day at the special price of only 99p/99c from online sellers including Amazon. 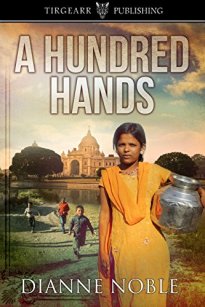 When Polly’s husband is jailed for paedophilia, she flees the village where her grandmother raised her and travels to India where she stays with her friend, Amanda.

Polly is appalled by the poverty, and what her husband had done, and her guilt drives her to help the street children of Kolkata. It’s while working she meets other volunteers, Liam and Finlay. Her days are divided between teaching the children and helping with their health needs. But when Liam’s successor refuses to let Polly continue working, she’s devastated to think the children will feel she’s abandoned them.

After a health scare of her own, she discovers her friend, Amanda, is pregnant. Amanda leaves India to have her child. At this time Polly and Finlay fall in love and work together helping the children. Tragedy strikes when one child is found beaten and another dead. Polly feels history repeating itself when Finlay becomes emotionally attached to a young girl.

Can Polly recover from her broken heart and continue to help the children, or will she give up and return home?

The first time I visited India I was ten years old, flying back to England with my parents and brothers after a long tour in Singapore. Our RAF Hermes plane took almost three days, stopping in several countries to re-fuel, and de-ice the wings. We’d travelled out in a troopship – a whole month and school lessons every day – but the Suez Canal had been closed so here we were in Calcutta, as it was then known. I remember the heat, the highly spiced kofta they gave us for breakfast with a fried egg, which none of us could eat, the hole in the floor toilet we had to squat over while flies buzzed around us, the strange smells and sounds. How could I have known I’d begun a lifelong love affair with India?

A single parent for much of the time, I had to wait until my children had grown and flown before I could travel to Rajasthan, the princely state of maharajahs and palaces. Since then I’ve been all over the country, generally on India’s excellent trains, from Delhi and Agra in the north where the Taj Mahal reduced me to tears, to beautiful Kerala in the south, the temples of Bhubaneshwar in the east and vibrant Mumbai in the west, yet still, time after time I am drawn back. Next year I hope to travel the width of the country by train, up to its border with Pakistan and then into the Himalayas. My modest house – I spend all my money on travel – needs replacement windows but hey!

Ten years ago I volunteered to spend three months teaching English to street children in Kolkata. While there I realised what it is I love about the country –it’s the people. Despite great deprivation they laugh and are joyful. This time in Kolkata proved to be the hardest thing I have ever done. Broken, crumbling buildings sit amid lakes of raw sewage; filthy children encrusted with sores are homeless; families live on a patch of pavement so narrow they take it in turns to lie down. They give birth – and die – there. Yet their indomitable spirit shines through.

I feared I couldn’t do it, felt my resolve dying daily amid the horrors and hardship, but I started writing a journal and it saved me. Every night, no matter how dirty and exhausted I felt, I recorded one child’s progress with the alphabet, another’s disappearance, how many times I’d been hugged. It was a form of de-briefing but also cathartic. It got me through and these diaries formed the basis for A Hundred Hands. 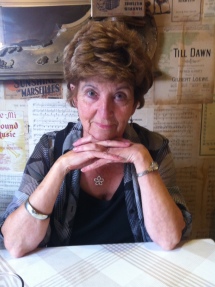 Born into a service family Dianne was brought up in Singapore, Cyprus and Yorkshire then went on to marry a Civil Engineer and moved to the Arabian Gulf. Since then, with sons grown and flown, she has continued to wander all over the world, keeping extensive journals of her personal experiences which she uses for her novels. Fifteen different schools and an employment history which includes The British Embassy Bahrain, radio presenter, café proprietor on Penzance seafront, and goods picker in an Argos warehouse, have resulted in rich seams to mine for inspiration.

9 thoughts on “India, a Guest Post by Dianne Noble, author of A Hundred Hands”