Having been an Engish teacher in a former life and an inspector very often responsible for inspecting child protection, I was fascinated to discover Decima Blake, debut author of Hingston’s Box, was positively influenced by her English Literature teachers at school. When I realised too that Decima is donating part of the royalties of Hingston’s Box to a charity supporting child victims of crime I had to invite her on to Linda’s Book Bag to find out more.

Hingston’s Box was published by Pegasus Publishers on 29th September 2016 and is available for purchase in paperback from Amazon and directly from the publisher. 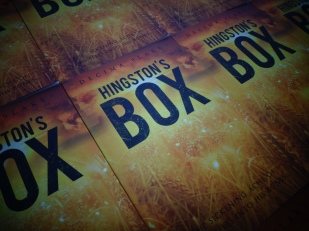 Since investigating the disappearance of fifteen-year-old twin boys, Hingston – a young, talented Detective Sergeant, has been tormented by night terrors. On waking, he remembers a vast, golden meadow that glows with warmth and carries the sound of rapid footfalls and trouser legs pushing through grasses. A curly haired boy runs tirelessly through the meadow. The promise of adventure is lost when the sickening ache of death seeps into Hingston’s bones. Feeling suffocated and tortured, melodic chimes calm him and his panic subsides.

Signed off and leaving the office, a key inexplicably falls from Hingston’s investigation file. Intrigued, he takes it with him, escaping London for Dartmouth where his investigative race begins. Stalked by a challenging elderly woman and hindered by his boss, his determination to solve the case draws him into the supernatural world that connects a murderous past to the present.

A Mini-Interview with Decima Blake

Decima, what are your views on the importance of literature in children’s lives?

I very much like the quote by author George R.R. Martin: “A reader lives a thousand lives before he dies. The man who never reads lives only one.” I believe this sums up the importance of literature in children’s lives. The more literature children and teenagers can read, the more equipped they may be when tackling issues in their own lives as young adults. In the same respect, books can equally serve as an invaluable insight for adults into the lives of today’s young people and the unique challenges they face.

When I think back to the literature I studied at secondary school, I relive the swathe of disappointment that passed over me whenever the title was not to my liking. I remember the dog-eared books and play scripts; the immaculately inscribed annotations contained therein and in contrast, the sporadic distractions penned by others in the margins.

On reflection, I’m pleased I studied Shakespeare’s Julius Caesar instead of Romeo and Juliet. I’ve found its exposure of political shenanigans more educational than I had appreciated aged thirteen. And despite the quality of the copy (which mattered a lot at that age), all of the texts I studied over those seven years actually delivered something positive to me: they broadened and altered my perspectives on life.

I absolutely loved A Level English Literature. Whilst I studied texts that were not always my first choice, each of them introduced me to new issues, points of view and social dilemmas. Collectively, they taught me about people in depths I could not have learnt from history books, documentaries and films alone. Most importantly for my crime writing, I learnt how to analyse themes, plots and subplots, and how to investigate characters. I applied these techniques in reverse whilst writing Hingston’s Box.

What books did you enjoy as a teenager?

Some of the most memorable books I enjoyed were Captain Corelli’s Mandolin by Louis de Bernières, Catch 22 by Joseph Heller, The Turn of the Screw by Henry James and A Walk in the Woods by Bill Bryson.

How were you inspired by your teachers?

My teachers were motivational and passionate about English Literature. They set a high standard and taught us well by giving their time, providing written and verbal constructive criticism and encouraging the students to help each other. We had some fantastic in depth discussions and debates in the classroom, particularly about William Blake’s Songs of Innocence and Experience, and World War 1 poetry and literature. The most important skill I learnt was that of comparison and analysis, in particular of themes and characters. It was this that inspired me to weave different themes and ideas throughout Hingston’s Box that I hope can be debated and analysed by readers.

Why did you include a focus on child exploitation in your novel Hingston’s Box?

Working with eleven to sixteen-year-olds in a secondary school made me realise how vulnerable young people are and how quickly things can go wrong. We have seen through the media, particularly over the past four years, how many young people’s lives have been changed or lost due to crime, exploitation, drugs or abuse. I’m passionate about child victims of crime and therefore put them at the centre of my novel.

Hingston’s Box raises awareness of all children’s vulnerability to exploitation. I’ve aimed to illustrate by comparison of a Victorian crime with the present, how easily children are targeted by those who intend to cause them harm and that the motives for and the methods of exploitation don’t really change.

A percentage of royalties from the sale of Hingston’s Box will be donated to the charity Embrace Child Victims of Crime. For information about the important support they deliver, please click here.

Decima Blake, has a long-standing interest in child protection having worked with teenagers, she is deeply passionate about child victims of crime. In writing Hingston’s Box, Decima drew on her love of classic English murder mysteries and ghost stories. Her interest in English Literature was ignited by two highly motivational teachers who made her A Level studies enjoyable, character forming and invaluable to her future endeavours.
Hingston’s Box raises awareness of the vulnerability of all children to exploitation. A percentage of royalties will be donated to the charity Embrace Child Victims of Crime.

3 thoughts on “A Mini-Interview with Decima Blake, author of Hingston’s Box”