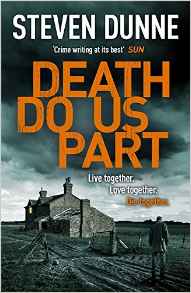 I am absolutely thrilled to be welcoming Steven Dunne to Linda’s Book Bag today. I love featuring authors I’ve actually met and when they are as talented as Steven Dunne, the excitement is doubled. Today, Steven’s latest book in the DI Damen Brook series, Death Do Us Part, is released in paperback. Published by Headline Death Do US Part is available for purchase from Amazon, Waterstones, Hive and all good book sellers.

It gives me great pleasure  to be hosting a guest post from Steven Dunne today all about why murderers kill.

Death Do Us Part

DI Damen Brook is on a rare period of leave and determined to make the most of it by re-connecting with his daughter Terri. But with her heavy drinking proving a challenge, Brook takes the opportunity to visit a local murder scene when his help is requested.

An elderly couple have each been executed with a single shot to the heart and the method echoes that of a middle-aged gay couple killed the previous month.

With the same killer suspected and the officer currently in charge nearing retirement, Brook knows that he has little choice but to cut short his leave when forced by his superiors to take the lead on the case.

Brook believes that he can catch this ruthless killer, but already distracted by Terri’s problems, is he about to make a fatal mistake and lead the killer right to his own door?

One of the most frequently asked questions of a crime writer is, ‘What is your favourite way to kill people?’ When asked I always end up explaining what I write and why the deaths in my books about serial killers in the East Midlands generally fail to be exotic. I’m not alone in this. I know Agatha Christie wasn’t averse to a dramatic poisoning or two in her work but, in the main, victims are dispatched without fuss. The reason for this is that Christie, like me, was interested in the psychology behind why people kill, particularly those who are actually planning to murder someone. Anyone can kill, given the right circumstances, but to plot someone’s demise and then act upon it requires a degree of evil which sets the perpetrator apart from the majority of the human race. This is what fascinates and appals about serial killers.

Since The Reaper was released in 2009 up to my sixth novel Death Do Us Part – out this month – I have not been exploring so much the who and how of serial killers but the much more interesting question of why. Why do men and women cold-bloodedly and with malice aforethought, plan to kill their fellow human beings? Often with Christie, serial murder had a profit motive with the killer positioning him or herself to claim an inheritance by eliminating a wealthy relative. Having set events in motion, subsequent murders were then committed to advance the cause or to cover tracks. One of my favourite examples of this template is Death on the Nile, one of her best works.

Obsessive love and revenge also feature heavily in her work but it took Christie’s genius to turn what are usually spur of the moment crimes, committed in moments of great passion and thus invariably messy and bloody, into cold blooded acts planned down to the smallest detail. The Murder on the Orient Express has a revenge plot at its heart, carried out with such unbelievable precision that even the world’s greatest detective is sorely challenged to solve the case.

My own work has a fiendish Christie-style mystery at its heart but my detective, DI Damen Brook, chases modern serial killers. And each killer I create has started with a simple question that I’ve asked myself before I write a word. In The Reaper it was, “How can I make a serial killer seem like the hero to readers?” The question for Death Do Us Part was, “How can I create a serial killer who thinks they’re doing the victims a favour?” From there, I can build a psychological profile of my killer which informs me how and who they would kill. The profile leans heavily towards motive and away from any salacious interest in method of killing. My serial killers don’t derive pleasure from the act of killing but from the removal of their victims.

Perhaps it’s my past career as a teacher that requires my killers never to take a casual attitude to the taking of a human life without some kind of reason, however twisted it may seem to us. Thus the killers that DI Damen Brook of Derby CID is hunting are more concerned with speedy and efficient deaths, leaving no trace and few clues so the killing can continue. Of course, the more planning that goes into a crime, the harder it is to catch the killer which requires a very special detective. Christie knew instinctively that it’s pointless having two superstar sleuths like Miss Marple and Hercule Poirot if you plan to pit them against clumsy villains like armed robbers or impulse killers. In all my work, DI Brook must stretch himself to the limit and use “the little grey cells” to solve the fiendish puzzle and bring the killer to justice. 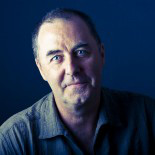 Steven has had a variety of jobs including Public Relations Consultant, freelance Journalist and supply teacher. In 1988, he began teaching English in Croydon before moving to Derby in 1996, where he began to think about writing a novel. in 2015, Steven’s book A Killing Moon won the East Midlands Book Award.

One thought on “Murder by Death, a Guest Post from Steven Dunne, author of Death Do Us Part”