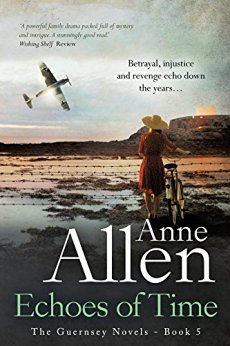 Having been to Guernsey 70 times en route to Jersey for work and never having got off the plane I am delighted to be interviewing Anne Allen as her latest story in The Guernsey Novels series, Echoes of Time, is published today 15th August 2016 by Sarnia Press in e-book. At least I can travel vicariously to Guernsey! Echoes of Time is available for purchase here and although it is book five in the series all Anne’s books can be read as stand alone stories. All of Anne’s lovely stories are available here. 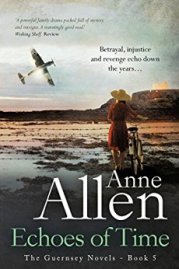 Betrayal, injustice and revenge echo down the years…

1940. Olive marries farmer Bill Falla. The Germans occupy Guernsey.
All too soon Olive realises she’s made a mistake.
Her life changes when she meets Wolfgang, a German officer-
but there’s a price to pay. . .

2010. Natalie Ogier returns to Guernsey to escape an abusive relationship – only to be plagued by odd happenings in her beautiful cottage on the site of a derelict and secluded farm. Disturbing dreams, disembodied voices and uncanny visions from the past. She becomes increasingly ill at ease as someone else’s past catches up with her own…
Her only immediate neighbour, Stuart, is the grandson of the original owners, Bill and Olive.

Thrown together in a bid to find out what really happened to Olive, can they each survive the repercussions of the past and move on?

An Interview with Anne Allen

Hello Anne. Congratulations of today’s publication of Echoes of Time. Thank you so much for agreeing to answer some questions on my blog about your writing.

I live in Devon, by my beloved sea. I have three grown-up children and my daughter and two grandchildren live nearby. I was born in Rugby, to an English mother and Welsh father. As a result I spent many summers with my Welsh grandparents in Anglesey and learnt to love the sea.  My restless spirit has meant a number of moves which included Spain for a couple of years. The longest stay was in Guernsey for nearly fourteen years after falling in love with the island and the people. I contrived to leave one son behind to ensure a valid reason for frequent returns. My other son lives in London which is great for city breaks.

By profession I was a psychotherapist but have now retired to write full-time. At the back of my mind the itch to write was always present but seemed too time-consuming for a single mum with a need to earn a living. I’ve now published five books in The Guernsey Novels series and mapped out the story for the sixth, due out in 2017.

Ten years ago I finally decided to pick up my pen after being ‘pushed’ by my mother to enter a true-life story contest run by Prima magazine. To my delight and surprise I won! The prize was £500 of M&S vouchers and a boost to my confidence as a writer. I started my first novel, Dangerous Waters, at that time but it wasn’t until 2012 that it was published. 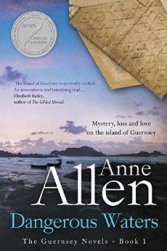 Over the years I’d had many creative ‘itches’, learning to mosaic, paint furniture, interior design and sculpt. So there’s never been a shortage of creative outlets!

How do you carry out the research for your novels?

Anything to do with contemporary Guernsey has been quite easy as I lived there for so long. I also make frequent trips over to refresh my memory and catch up with my son and friends and do a spot of research. My work as a therapist has helped with the issues raised in my stories, such as tragedy or adoption. All the books reference the German Occupation in some way and I’ve completed a large amount of research on that period. Fortunately there’s a mass of documents and books available and I’ve been lucky to talk to islanders who lived through it.

The easiest is writing the outline of the story and the hardest is filling in the gaps.

(Oh, I know that feeling Anne!)

I’m a bit of a procrastinator so don’t start writing until I’ve completed essential tasks such as checking on Facebook, twitter and anything else that doesn’t require too much effort. Then the all-important coffee has to be made and drunk…By late morning I’m ready to work and will continue, if the Muse is willing, until early evening with a break for lunch.

I write in my study as I use my PC. I used to write by hand and then type it up, but after a problem with my right hand which involved an operation, I only write the brief outlines of each chapter before typing. And I can’t cope with noise and distractions so would never be able to write in a café or on a train.

(I think it’s the lot of many writers to procrastinate and social media is a great way to do so, so you’re in great company Anne.)

My choice is quite eclectic. I enjoy historical fiction such as the books by CJ Sansom and a mix of contemporary fiction including the works of Erica James and Robert Goddard. I like stories with depth and plots which make me think. But I’m happy to try new authors!

Well, I love dramas on television and visiting the theatre and museums and probably, unconsciously, pick up ideas from these.

Which of your characters would you most like to be and why?

Jeanne, from Dangerous Waters, as I fell in love with her man, Nick.

Readers have told me they think Dangerous Waters would make a great film as it’s particularly visual and even includes a police car chase. I’m just waiting for the film rights offers…

How important do you think social media is to authors in today’s society?

It’s invaluable. Authors now have the opportunity to interact directly with their readers and vice versa, unheard of in the past. The worldwide reach of Facebook and twitter, for example, brings authors closer to their readers who can buy their books in any country in today’s digital society. I tend to use it for promotion, particularly if I have a new book launching or a price discount.

If you had 15 words to persuade a reader that a Guernsey Novels book should be their next read, what would you say?

If you love beautiful settings, a mix of love, mystery and drama then you’ll be hooked!

Is there anything else you would have liked to be asked?

I’d like to point out that although my books form a series, each story is a standalone and could be read out of sequence. However, they are linked by characters who keep popping up, meaning if you don’t want to know what happened to them too soon, it’s better to read them in order. Just saying! Oh, and book 5, Echoes of Time, is out on 15th August.

Thank you so much, Anne, for your time in answering my questions. 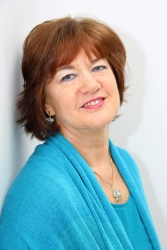 Anne was born in Rugby to a Welsh father and an English mother. As a result she spent many summers with her Welsh grandparents in Anglesey and learnt to love the sea. Now she is based in Devon to be near her daughter and 2 small grandchildren. Her restless spirit has meant a number of moves, the longest stay being in Guernsey for nearly fourteen years after falling in love with the island and the people. She contrived to leave one son behind to ensure a valid reason for frequent returns. Her younger son is based in London – ideal for city breaks.

6 thoughts on “Interview with Anne Allen, author of Echoes of Time”