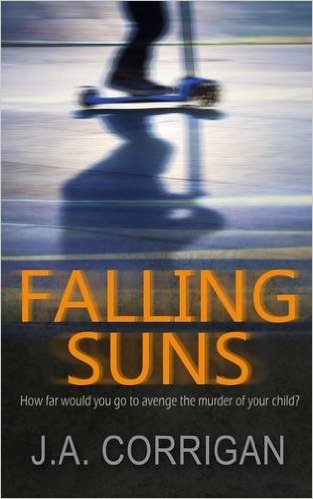 It gives me enormous pleasure to be hosting a publication day interview with J A Corrigan, as her debut novel Falling Suns is published today July 14th 2016 by Accent Press. Falling Suns is available for purchase from all good bookshops and from Waterstones, Amazon, The Guardian Bookshop and W H Smith.

Ex-DI Rachel’s small son is missing. Then his body is discovered. Her cousin Michael is found guilty of his murder and incarcerated in a secure psychiatric unit. Four years later, now divorced and back in the police force, Rachel discovers that Michael is being released to a less secure step-down unit, with his freedom a likely eventuality. Unable to cope with this, she decides upon revenge, assuming a new identity to hunt him down and kill him. However, as she closes in on her target, her friend Jonathan, a journalist, uncovers some unnerving information about her mother and others in her family and begins to suspect that Rachel’s perception of the truth might not be as accurate as she thinks that she might be about to murder the wrong man…

An Interview with J.A. Corrigan

Hi Julie-Ann. Thank you so much for agreeing to answer some questions on my blog about your writing and your debut novel Falling Suns.

Firstly, please could tell me a little about yourself?

Hi Linda, and thank you for hosting this Q&A blog.

I am married, with one daughter. I live in Berkshire, but was born in Mansfield, Nottinghamshire – a place with which I still have strong connections. I’m a qualified physiotherapist and have worked within both the NHS and privately. I gave up working last year to concentrate more on my writing, but may well go back to it one day.

I always wanted to write. I wrote as a child and a young teenager, but then I put the idea on a back burner. Oddly enough, the desire came back to me soon after having a baby, but I decided to wait until she was a little older before I had a go. I’m glad I did now as the whole process is so time-consuming and the very nature of the ‘craft’ does seem to encourage obsessiveness. I don’t think that obsessiveness (that you need to have to be successful I feel) sits that well with having a young child. Not for me anyway – but I do know that other writers who cope brilliantly. I’m not great at multi-tasking; a professional job and a child was enough with me to cope with. I started writing seriously when my daughter was ten.

I find the first draft of a novel the most difficult. It is then when I need massive swathes of time to think and write. I’ve come to love writing the second draft, and editing.

I have to say, I do love researching my novels too. A little bit too much sometimes!

What are your writing routines and where do you do most of your writing – I know you like to write when you’re travelling for example?

I’m definitely an early morning person. I write more prolifically and am the most creative first thing in the morning. When writing a first draft I try to get up at 5am, and I’ve usually written 2,000 words by late morning. Any other words I add that day are a bonus. I can’t write anything new in the evening, but I can edit at that time or read for research.

I write at my desk in my study and rarely use my laptop for ‘proper’ writing. I’m a physiotherapist and understand the perils of poor posture! Also, I try to see the writing as a job, so I get dressed and go to work in my study. Although I must admit that recently the getting dressed bit is lapsing …

I don’t write that much when I’m travelling or on holiday but I always have a notebook in my bag that comes home bulging. It starts on the plane (if going abroad); ideas for stories seem to come thick and fast, including short story concepts as well as plot points for a novel-in-progress. Lying on a sun lounger facing the sea I allow my mind to open and the ideas that emerged on the plane begin to sprout and grow.

I think definitely a journalist in the first instance.

But at the top of the list too – a buyer for Selfridges comes to mind! I do love beautiful ‘things’ – sounds shallow, I know, but I do. Home furnishings as well as clothes …

Also, after loitering on the periphery of the literary world I would love to be involved in PR and marketing.

You have written, and had published, many short stories. What were the differences and challenges in writing a full-length novel?

Writing a novel is a marathon; the writer needs to keep going. Whereas writing short stories is more of a sprint – concentrated energy given to a smaller amount of prose. I do feel that many of my short stories were novels-in-waiting and it was this thought that finally pushed me into attempting my first novel.

How did you go about researching detail and ensuring your novel Falling Suns was realistic?

I did a lot of research for Falling Suns. To try and give the novel true veracity I researched every aspect of the themes that are explored in the novel: institutional corruption, method acting, Chinese medicine, mental health problems, cosmetic surgery, as well as locations in Poland, and London!

You explore some important themes like corruption, phone hacking and morality that reflect and affect today’s society in Falling Suns. How far was this your primary aim and how far did they arise naturally out of your plot?

In all truthfulness these themes came about more through plot than a conscious desire to explore these aspects of society. However, I knew these themes would be explored as soon as I began outlining the novel and so at that point I made a conscious decision that the novel’s tone would centre on these issues.

Have you changed your opinions of those who take revenge in their lives as a result of writing Falling Suns?

Writing the novel encouraged me to think a lot about the moral issues surrounding revenge. It is never the right and ethical act, and yet it is a compulsion that I think sits stubbornly, perhaps even resolutely, inside many of us. The need for revenge creates a lot of conflict within an otherwise ‘moral’ character – and that is a good place for a writer to begin a story.

National institutions are not represented very positively at times in Falling Suns. How do you think readers will react to the way you explore their corruption?

In Falling Suns although Littleworth isn’t represented in a vastly positive way, I do try to emphasise that the events which occur there are not representative of all psychiatric institutions. I.e. when Jonathan researches an institution in the south of the UK.

Falling Suns is a work of fiction and the characters that are portrayed in Littleworth are indeed fictitious; however, it is not outside the realms of fact that what occurs there could happen.

Wherever a person, or an organisation, holds power there is always the opportunity for corruption. It is a human trait that shows itself time and time again.

I love the blurriness of the cover to Falling Suns. I think it represents the blurring of lines between morality and the law that your novel explores. What were you hoping to convey with that image (without spoiling the plot please)?

I think you are right! I also think the image represents motion in stillness, if you like. Although Rachel’s son Joe is not alive, not physically existing, he does indeed still exist very strongly inside her mind. She is reluctant to let him go – and here lies Rachel’s dilemma, and sadness.

I do love the cover that Accent Press designed for me.

How did you create Rachel’s character? Did you write her back-story, have a character profile, create a mood board, use Pinterest or some other method?

I have to admit, I don’t do a lot of planning of my characters. I mean, I have a strong image of what they look like and their basic personality, but I don’t really start to expand on that until I start writing.

Rachel was very difficult to write and it took me a few drafts to really ‘get’ her. She had to be strong but vulnerable. Capable but fragile. I think I really got to grips with her once I did begin to explore her past and her childhood. And of course I was able to use Jonathan to give an outside viewpoint of her.

If you could choose to be a character from Falling Suns, who would you be and why?

I would probably be Jonathan! I’d have loved to be a journalist!

If Falling Suns became a film, who would you like to play Rachel?

That’s an easy answer! Uma Thurman. Although she might be a little too old.

You didn’t ask, but I’d have Charlotte Rampling play Margaret!

If you had 15 words to persuade a reader that Falling Suns should be their next read, what would you say?

A novel addressing every parent’s nightmare and by reading we might be able to understand ourselves a little better.

Sorry, that’s 19. I’m not good with sticking to word counts!

(You’re forgiven as I was always hopeless at Maths too.)

Thank you so much, Julie-Ann, for your time in answering my questions. 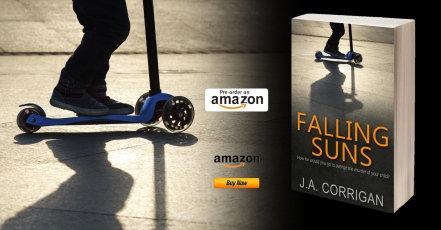 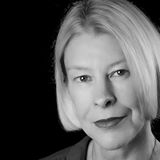 J.A. Corrigan now lives in Berkshire, but was born in Mansfield, Nottinghamshire. Her maternal grandad was a miner, her paternal, a baker. Her gran worked on a fruit and veg store in Mansfield’s market square.

After A Levels she completed a Humanities degree in London, majoring in History and English Literature. She then went on to train and work as a physiotherapist.

She loves to run, cook, and drink good wine. She likes to read great novels, autobiographies and a diverse range of non-fiction. Adoring travel, JA seems to be at her most creative, and most relaxed, sitting in a very narrow airline seat, going somewhere. She has been writing seriously since 2010 and her short stories have been published in various anthologies.

Her debut novel, Falling Suns (Accent Press) is a compelling psychological thriller that explores the darker side of human nature. 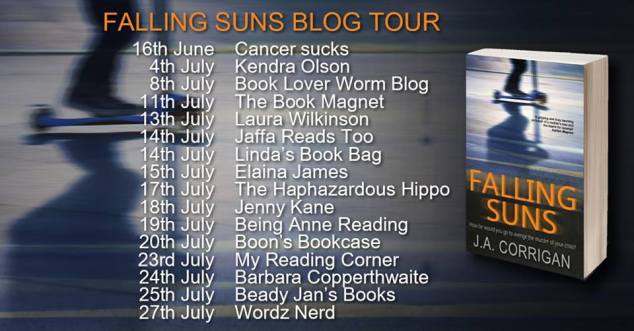 9 thoughts on “Publication Day Interview with J. A. Corrigan, author of Falling Suns”