I’m delighted today to be featuring another author, Virginia King, whom I’ve met through the Facebook group Book Connectors. Not only do I have a guest post from Virginia, and my review of her book, but she is also giving away a prequel to the Selkie Moon stories,  a stand alone short story Laying Ghosts. You’ll find the link below. Even better, is the chance to win a signed copy of The First Lie or an audio version plus a $15 Amazon Gift Code. One Grand Prize lucky winner will $100 Amazon Gift Code. See the information at the bottom of this blog post for more details.

The First Lie, the first book in the Selkie Moon series is available for purchase on Amazon US and Amazon UK. It is currently only 99p for a limited time.

Putting the Myth into Mystery

A few years ago, serendipity played a trick on me. I’ve always loved mysteries grounded in the real but on the flipside I’ve had a passion for folktales and their ability to touch me at a symbolic level. Two new authors and a crisis later, these two interests collided, changing my career as a mystery writer forever.

The Girl in a Swing 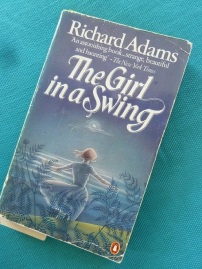 Richard Adams (of Watership Down fame) came first. In this psychological thriller he weaves the mystical into the real to create something very powerful. The unseen brings profound insights to the seen as the clues to a dark secret creep up on the main character and the reader through a series of psychic happenings. I’ve read the book ten times, trying to figure out how Adams laid bare this human tragedy with such finesse, and every time the clues have the same effect on me even though I know what’s going to happen. But deconstructing the narrative and marking the clues with post-it notes didn’t reveal the alchemy at work between the lines. What was going on? Can words alone show us the truth about ourselves with such power?

All she had to do was jump …

This sentence got me started on my own psychological mystery. Soon Selkie Moon turned up, a modern woman with a mythical name – the ‘selkies’ are the Celtic seal people who peel off their skins and dance in the moonlight in human form. I hoped Selkie’s name might ‘mysteriously’ create depth in the story, but balancing the horizontal momentum (What happens next?) while excavating the layers of the puzzle resulted in many drafts.

Landing in the labyrinth

The book was set in Sydney, my home town, so to find a deeper connection with the story I grabbed my camera and spent a whole day visiting all the locations. But I returned home in tears because none of the places ‘spoke’ to me.

Serendipity intervened. I dropped Selkie into a strange place – Hawaii – and her role as a malihini (a newcomer) brought an amazing dimension to the story. Selkie is escaping a destructive relationship in Sydney but she lands in a mythological nightmare in Hawaii. The events are so bizarre and terrifying that she’s forced to delve into the past and face the shocking truth about herself.

My editor and I still chuckle over her initial reaction: You’ve got an Australian main character in a Hawaiian setting, but you’re drawing on Irish/Scottish mythology (selkies); it’s difficult to make those disparate elements fit together cohesively.

Understatement. It was a mess. But cultures have mingled for centuries in Hawaii – ho’ohihi, interconnectedness – surely it was the perfect place for mythologies to collide and merge … Luckily I met an author who can forge a ‘mythical mess’ into something akin to magic.

Kafka on the Shore

In this coming-of-age novel Haruki Murakami reacquainted me with the power of mythology. By weaving magic realism into suspense and popular culture, he takes the reader into a labyrinth of symbols that evoke the layers of human experience. As the description promises:

Haruki Murakami enfolds readers in a world where cats talk, fish fall from the sky, and spirits slip out of their bodies to make love or commit murder.

He also plays with an Oedipus complex, a journey into a time-slip forest, a mystical stone that must close an invisible doorway … This mess of symbols from around the world is complex and strangely satisfying – because we catch glimpses of our secret selves.

In interviews Murakami also hinted that, like the reader, he wasn’t always sure what was going to happen next. At some level he let the mythology call the shots and create a mysterious journey into the human soul.

I now found the courage to weave some magic into my own realism. With Hawaii as my inspiration I allowed mythical elements to drop into The First Lie like poltergeists and create havoc until I figured out why they was there. I discovered that I love this kind of writing because I can never lose the capacity to be surprised, taking the mystery beyond the predictable.

Connections started forming themselves, often while I was asleep: 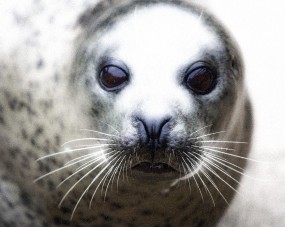 Putting the myth into mystery

Now I’m hooked, exploring far-flung places full of secrets where Selkie delves into psychological clues tangled up in the local mythology. The Second Path is set in France (watch out for a Perrault fairy tale) and in Book Three (coming soon) the folklore of rural Ireland is helping her unravel an old murder.

My review of The First Lie by Virginia King

I have to say I wasn’t sure what to expect from Virginia King’s writing, but it surprised me by the intensity of its presentation. Virginia King weaves the symbolism of the world into a fast paced and exciting story that is part mystery and part mysticism, providing several strata of meaning in a very absorbing and thought provoking story. Indeed, the story can be read as a thriller but also as a kind of self-awareness manual as the reader has much to learn from the journey that Selkie makes for herself. The traditional stories surrounding selkies, the sea, voodoo and magic give a supernatural depth that is absolutely fascinating.

I felt The First Lie was essentially a love story, but not in the traditional sense of a conventional male/female relationship. Whilst there are these conventional relationships, Selkie also needs to learn to love and value herself and love is portrayed through memory, friendship and family relationships too. I thought this exploration gave real warmth to the book that I enjoyed immensely.

If I have a criticism, it is that I would have liked more descriptive narrative as there is so beautifully at the very beginning and end, as the book is very dialogue driven. However, this does allow a deeper insight into Selkie’s personality. So too does the first person storytelling and I found what Selkie thinks equally as informative and important as what she says. By the end of The First Lie I felt I had come to know a real person.

I really enjoyed The First Lie and I think it’s a book that would reward more than one reading to appreciate fully the nuances of metaphor, myth and spiritualism. I’d really recommend it and I know I will be returning to it again. 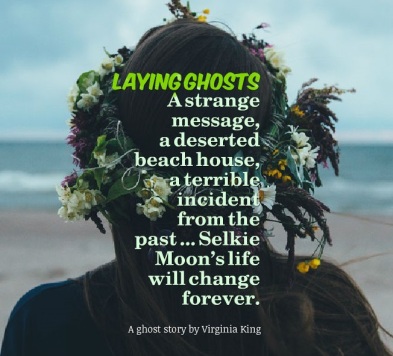 The above experiences inspired Laying Ghosts, a 24-page modern ghost story with mysterious links to a murder ballad from the 1700s. It’s a standalone story but also the prequel to the Selkie Moon Mystery Series, explaining to the reader (and the author!) just why Selkie suddenly ran away to Hawaii. Download your free copy here. 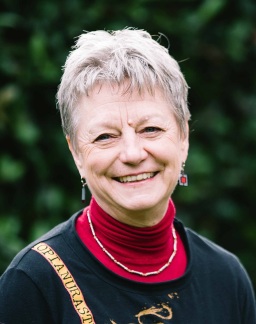 When a voice wakes you up in the middle of the night and tells you to write a mystery series what’s a writer to do? That’s how Virginia King came to create Selkie Moon, after a massage from a strange woman with gifted hands was followed by this nocturnal message. Virginia sat down at the keyboard until Selkie Moon turned up. All she had to do was jump, the first sentence said. Soon Virginia was hooked, exploring far-flung places full of secrets where Selkie delves into psychological clues tangled up in the local mythology.

Before Selkie Moon invaded her life, Virginia had been a teacher, an unemployed ex-teacher, the author of over 50 children’s books, an audio-book producer, a workshop presenter and a prize-winning publisher. These days she lives in the Blue Mountains west of Sydney with her husband, where she disappears each day into Selkie Moon’s latest mystery. Bliss.

You can find out more about Selkie Moon and Virginia on Virginia’s website, on Facebook and by following Virginia on Twitter. You’ll also find buy links for all Virginia’s books here.

6 thoughts on “Putting the Myth into Mystery with Virginia King”