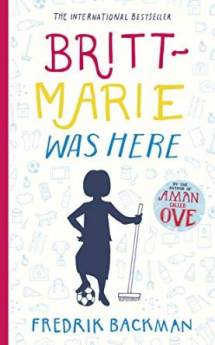 For as long as anyone can remember, Britt-Marie has been an acquired taste. It’s not that she’s judgemental, or fussy, or difficult – she just expects things to be done in a certain way. A cutlery drawer should be arranged in the right order, for example (forks, knives, then spoons). We’re not animals, are we?

But behind the passive-aggressive, socially awkward, absurdly pedantic busybody is a woman who has more imagination, bigger dreams and a warmer heart than anyone around her realizes.

So when Britt-Marie finds herself unemployed, separated from her husband of 20 years, left to fend for herself in the miserable provincial backwater that is Borg – of which the kindest thing one can say is that it has a road going through it – and somehow tasked with running the local football team, she is a little unprepared. But she will learn that life may have more to offer her that she’s ever realised, and love might be found in the most unexpected of places.

My Review of Britt-Marie Was Here

Oh my goodness, the tension as I approached reading Britt-Marie Was Here. I adored the first two books by Fredrik Backman and was so worried that a third might be too great a possibility to live up to the charms of My Grandmother Sends Her Regards and Apologises (my review here) and A Man Called Ove (my review here).

I had also met the author too so it was even more nerve wracking as Fredrik Backman is such a charming and entertaining man that I was desperate not to be disappointed in this third novel. You can see what happened when I met Fredrik Backman by clicking here. 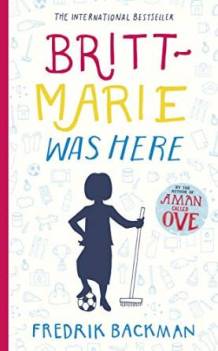 What a relief Britt-Marie Was Here turned out to be. I adored every single word of it. Whilst some readers might find the style too similar to the other books, for me it was like encountering an old friend and finding I still loved them.

Fredrik Backman has such a perfect turn of phrase so that every nuance of emotion and meaning is accessible even though the book is in translation. Credit and congratulations must also be given to Hennig Kock for translating the original manuscript. I think what makes the writing so successful is the balance of sentence length and style as well as the present tense narrative so that there is a vivacity and liveliness that is totally captivating.

I laughed aloud and shed several tears reading Britt-Marie Was Here. Indeed I enjoyed it as much as A Man Called Ove and more than My Grandmother Sends Her Regards and Apologises. Fredrik Backman has the uncanny knack of being able to delve inside a person’s soul and convey exactly what they are thinking. He achieves this as much by what he doesn’t write as by what he does – he knows how to convey meaning through a character’s glance as well as by what they say, for example.

It is the desire to belong, the sense of loneliness and the ultimately uplifting emotions that make Britt-Marie Was Here so fantastic. There is also such lovely gentle humour that entertains and delights. So too do the small illustrations at the start of every chapter, the meanings of which become clear as you read.

In a sense there isn’t a complicated plot. Britt-Marie needs a job and gets one in Borg, a run down and small provincial town. That said, I couldn’t stop reading without pause, so intent was I in wanting to know what happened to Britt Marie and the inhabitants of Borg. Almost incidentally Fredrik Backman drops in burgeoning homosexuality, small time crime, murder and violence which you wouldn’t expect and which add depth to the plot. There is also tenderness and humanity that touches the soul.

The characters are wonderful. Even the bell above the door to the shop/ post office/ pizzeria/ garage has a personality. Britt-Marie is a fantastic creation and I found her as compelling as Ove. She is revealed as much to herself as to the reader as the story progresses and I thought the ending of the novel was totally apt and fitting.

You can follow Fredrik Backman on Twitter and visit the blog where his writing began (I find Google Translate helps!)

22 thoughts on “Britt-Marie Was Here by Fredrik Backman”