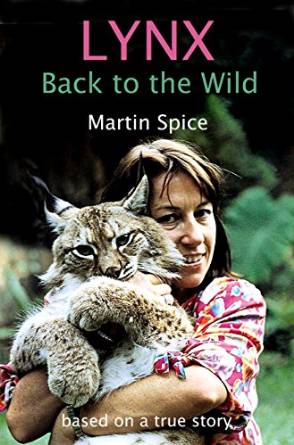 When I found that Martin Spice is an ex-teacher, like me, loves travel, like me, and is a passionate gardener, also like me, I had to invite him on to Linda’s Book Bag to talk about his family novel Lynx:Back to the Wild which is available for purchase on Amazon UK and Amazon US.

About Lynx: Back to the Wild

A tiny lynx cub with no mother. A wise monk in an ancient monastery. A destiny to be fulfilled. A perilous journey across the Himalayas. A battle against time to save the cub’s life. A firm friendship between two boys, worlds apart, united by their love of animals.

Based on a true story and set in Tibet and Nepal, LYNX: Back to the Wild is an exciting adventure story for all the family, full of the life and colour of its exotic settings and deeply moving in its account of a desperate struggle for survival against all the odds.

Rooted in the author’s extensive travels and love for the people and cultures of the Himalayas, this short novel is a celebration of human and animal survival set against one of the world’s most beautiful but harshest environments.

An Interview with Martin Spice

Hello, Martin. Thank you so much for agreeing to answer some questions on my blog about your writing and in particular about LYNX: Back to the Wild, your new book.

I was born in Northampton, now famous for the film and musical Kinky Boots! I spent my professional life as an English teacher in England and overseas and latterly as the principal of an international school in northern Borneo. In all we spent twenty years working abroad, over nine of which were in Kathmandu. The opportunities for travel were wonderful and Tibet was, of course, an outstanding destination. We came back to England to settle in 2009 and have lived happily near Nailsworth ever since, tending two veg patches, writing and enjoying the company of our children and grandchildren.

(My goodness – more things in common. I went to school in Northamptonshire and my Grandmother belonged to a Northampton shoe making family at the turn of the 20th Century!)

It is probably a truism that all English teachers want to be writers but I never really got going until I was in my late thirties. And even then I only wrote sporadically. When we worked in Malaysia my writing suddenly took off with a lot of journalism, travel writing and reviews. When we returned to England, I did a lot of work for the Times Educational Supplement and then we decided to write a tongue-in-cheek book about our vegetable growing experiences. That became Spade, Seed & Supper: an allotment year.

(Looks like I’d better get a copy, Martin, as I have an allotment!)

I would love to say “played saxophone” but as I am completely unmusical it was just as well writing was always my first choice.

(Are you sure we’re not related? I’m tone deaf!)

How do you carry out the research for your novels?

We lived in Nepal for a total of nine years and I travelled to Tibet twice. I suppose that would have constituted research had I actually realised that I was going to write LYNX: Back to the Wild. As it was, I was able to draw on the experiences I had already had.

Tell me about how LYNX: Back to the Wild came to be written.

The book is based on a true story. We had friends in Kathmandu who reared a lynx cub that had been brought to them by some travellers in Tibet. It had been very sick at first but when I knew Tashi, which was the cub’s name, he was a healthy survivor. We saw him frequently and were fascinated. One evening they told me the whole story of his rescue and rearing and I knew then that it was a story that had to be told.

How much did you need to add to that basic storyline?

A great deal. There are two strands to the book, the survival of the lynx cub and the story of the Tibetan boy that finds and protects it. He is called Sonam and the book hints that there is something very special about him. He is not like the other nomad children. He is quieter, more reflective, more thoughtful. When he has parted with the cub he feels destitute. He accompanies his mother to a monastery where he gets lost. There he meets a monk to whom he spills out all his woes. The monk tells him that he has a destiny to fulfil and that it is somehow connected with the cub. So Sonam sets off on a perilous journey overland to Kathmandu… From then on his story is intertwined with that of the lynx cub.

Is LYNX: Back to the Wild an adult book or a children’s book?

Emphatically both. It has been used very successfully in the classroom but it has also been read by a lot of adults who have become engrossed in the story. My wife has tales of her classroom assistant in tears! I feel above all that this is a family book. So much can be gained from books being shared. LYNX: Back to the Wild raises lots of issues to do with endangered species and survival, as well as being an out-and-out adventure story set in a fascinating culture.

Getting down to it is the hardest part! I am capable of working very hard but I also think of myself as a natural prevaricator. I enjoy most of the writing process once I get down to it.

I read a lot of modern fiction, much of which I review for The Star in Malaysia. It’s the biggest English language paper in the country and they have a Books section that is taken very seriously.

Growing vegetables. That obsession led to the writing of Spade, Seed and Supper, a very tongue-in-cheek account of our attempts to grow our own food. Many of our experiences were very funny and the book reflects that with some lovely cartoon illustrations. Travelling, running a school and the family also provide ideas. They are everywhere once you start looking!

Which of your characters would you most like to be and why?

I rather envy the monk who advises and teaches Sonam; there is a certainty and wisdom there that I find very attractive.

LYNX: Back to the Wild, unhesitatingly. It would make a wonderful film because the scenery is breath-taking and the lynx is such a beautiful animal. It is also, I think, a very moving story.

How important do you think social media is to authors in today’s society?

Clearly very, and even more so if you self-publish because it is the only shop window we have. I wish I felt more comfortable about it because Twitter seems almost obligatory and I haven’t yet summoned the courage to open an account. I do have a website though which readers can reach by clicking here.

If you had 15 words to persuade a reader that LYNX: Back to the Wild should be their next read, what would you say?

Martin, thank you so much for your time in answering my questions. I think LYNX: Back to the Wild sounds great.

It’s me who should be thanking you for this opportunity. I am very grateful.

Readers can find out more about Martin and his writing on his website where there is more about the story behind LYNX: Back to the Wild, including some wonderful photos.

One thought on “Author Interview with Martin Spice”