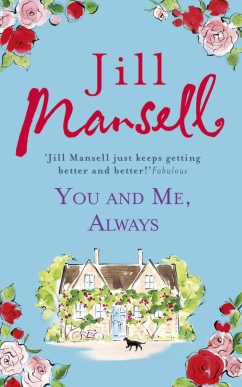 Having long been a fan of Jill Mansell’s writing I’m delighted to be part of the celebrations of her latest novel You and Me, Always which was published by Headline Review in hardback on 28th January 2016. You can buy You and Me, Always here in the UK and here in the US, from all good bookshops and direct from the publisher. It’s my great pleasure to bring you an extract from this lovely book below. Equally exciting is the chance for UK readers to win a hardback copy of You and Me, Always in the competition at the bottom of this blog post.

About You and Me, Always

On the morning of Lily’s twenty-fifth birthday, it’s time to open the very last letter written to her by her beloved mother, who died when she was eight.

Learning more about the first and only real love of her mum’s life is a revelation. On the same day, Lily also meets Eddie Tessler, a man fleeing fame who just might have the ability to change her world in unimaginable ways. But her childhood friend Dan has his own reasons for not wanting Lily to get too carried away by Eddie’s attentions.

Before long, secrets begin to emerge and Lily’s friends and family become involved. In the beautiful Cotswold village of Stanton Langley, nothing will ever be the same again…

Read an extract from You and Me, Always

A bird was singing loudly in the honeysuckle outside Lily’s bedroom window. Coral would probably know what kind of bird, but Lily didn’t have a clue. It sounded very cheerful, though. She opened her eyes and saw from the dazzle of light slicing through the gap in the curtains that it was destined to be another hot, sunny day.

She slid out of bed, knowing that when she opened the door, the tray would be outside. It always was; over the years it had been a tradition from which they’d never wavered.

And indeed it was there, on the wine-red landing carpet, the rectangular silver tray bearing a single rosebud in a squat silver vase, a glass of freshly squeezed orange juice, a sealed envelope and a small flat package wrapped in silver and yellow striped paper and tied with curly silver ribbons.

Lily bent down, picked up the tray and carefully carried it back into her room, laying it on the bedside table so nothing would topple over. Drifting up from downstairs she could hear sounds of movement, the clink of china, the murmur of voices on the radio, doors being opened and closed.

But this, now, was private, to be shared between her and her mother. Just the two of them.

For the very last time.

Lily took a sip of orange juice and opened the envelope. Whereas all the other letters had been written on thick lilac writing paper, this one was on a plain white sheet of A4. But the handwriting was the same, instantly recognisable with its extravagant loops and swirls. She ran the tips of her fingers over the paper, the first person to touch it since her mum had written the words, then lifted it to her nose and inhaled to see if it retained any recognisable scent.

No, it just smelled of paper.

OK, here goes. She took a steadying breath and began to read.

You’ll find other lovely things about Jill Mansell and You and Me, Always with these other bloggers: 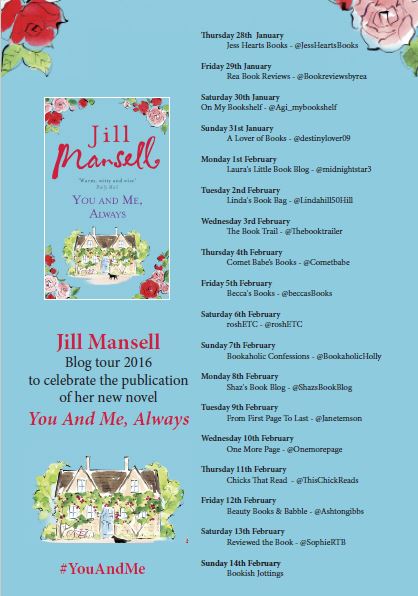 Enter to win a hardback copy of You and Me, Always (UK only I’m afraid) by clicking here

9 thoughts on “You And Me, Always by Jill Mansell”